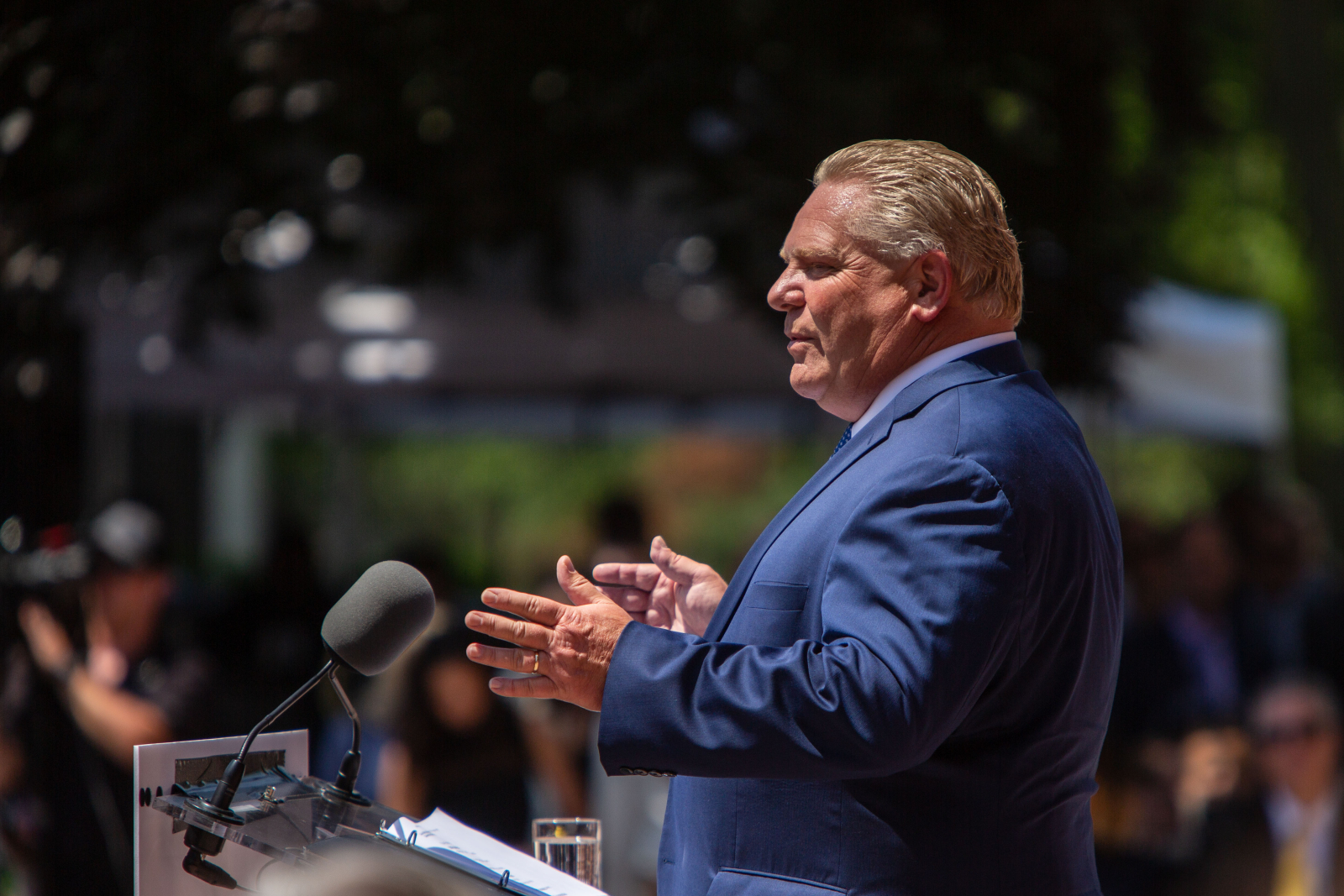 Premier Doug Ford addresses the crowd after the swearing in ceremony at Queen's Park in Toronto on June 28, 2018. File photo by Alex Tétreault
Previous story
Next story

Doug Ford is marking his first 100 days as Ontario's premier with a rally at the heart of the so-called Ford Nation, the west Toronto area where he and his family cut their political teeth.

Ford, who officially took the reins on June 30 after promising to reduce government waste without cutting jobs or services, hosted the Tuesday evening event at the Woodbine Banquet Hall in his riding of Etobicoke-North.

"Over a hundred days ago, we promised we would restore accountability and trust to government," the premier told an enthusiastic crowd gathered for the event. "And I am proud to say we have delivered."

Summarizing his government's accomplishments, Ford touted the cancellation of the Drive Clean program and a number of solar and wind power projects, as well as the introduction of buck-a-beer.

None of that, he said, would have been possible without the voters.

"We have a great team, an all-star team, in Queen's Park," he said. "But we have an even better team outside of Queen's Park, and that's folks like you — thousands of people across the province that support us."

A polarizing figure since his time as a Toronto city councillor, Ford has been hailed by supporters as a champion of fiscal restraint focused on fulfilling his promises, and condemned by opponents as a regressive autocrat willing to ignore democratic processes to push through his agenda.

In that time, Ford has fulfilled or taken steps towards several of his key campaign pledges, convening the legislature for a rare summer sitting — and in one instance, an overnight debate — in order to advance his plans.

His first moves included dismantling major policies brought in by the previous Liberal government, such as a modernized sex-education curriculum and the province's cap-and-trade system.

Both decisions have faced backlash and spawned ongoing legal challenges, with critics alleging the government is trampling on the rights of Ontarians.

The Ontario government, meanwhile, has launched its own a legal battle against the federal government over Ottawa's plan to impose carbon pricing on provinces that don't have their own system in place by next year. Ford has been rallying support for his cause among other provinces, at times allying himself with the opposition rather than the sitting premier.

The premier recently announced he would go through with his vow to halt a planned increase to the minimum wage, then said he would scrap the entire legislation that combined the wage increase with a number of other labour reforms such as paid sick days.

Ford has also made good on his election promise to re-examine government spending, calling a commission of inquiry that found the province was facing a $15-billion deficit. Critics, including opposition parties and labour groups, have suggested the move will pave the way for cuts.

Some of Ford's early actions, however, weren't part of his election promises.

His controversial plan to cut Toronto's city council to 25 from 47 in the middle of a municipal campaign stunned politicians and voters alike, and prompted a legal challenge that initially saw the legislation overturned as unconstitutional.

Ford then announced he would use a rare constitutional provision to override the ruling, setting off multiple protests, including one that saw crowds rally outside the legislature overnight. An appeal court eventually agreed to put the decision on hold until after the Oct. 22 municipal vote. An appeal of the lower court ruling has yet to be heard.

His plan for legalized cannabis also wasn't fleshed out during the campaign. The province recently laid out its plan to have cannabis sold online only when it becomes legal Oct. 17, with retail stores to follow next year. A proposed legislation further allows cannabis to be smoked by those over 19 wherever the smoking of tobacco is permitted.

While the premier has delivered on some key promises, the first part of his term is defined by unpredictability, making it difficult to project what his government will do in the future, said Jonathan Malloy, a political science professor at Carleton University in Ottawa.

"It's a reactive vision, it's rolling back some of things the Liberal government did ... I don't see a lot of big new ideas or policies coming out and there's not really clear cohesion," Malloy said.

"What are this government's priorities, both now and over the next four, five years? I can't really look back at the last 100 days and project where this government is going ahead from there, which you could with the (Mike) Harris government or the (Dalton) McGuinty government."

Tuesday's rally comes weeks after the annual gathering known as Ford Fest, a public event with free food and entertainment that used to be held at the Ford family home in the Etobicoke area of Toronto.

During the September edition of Ford Fest, the premier posed for a photograph with Faith Goldy, a controversial Toronto mayoral candidate known for her extreme views. Ford was questioned for days over the photo until he publicly distanced himself from Goldy.