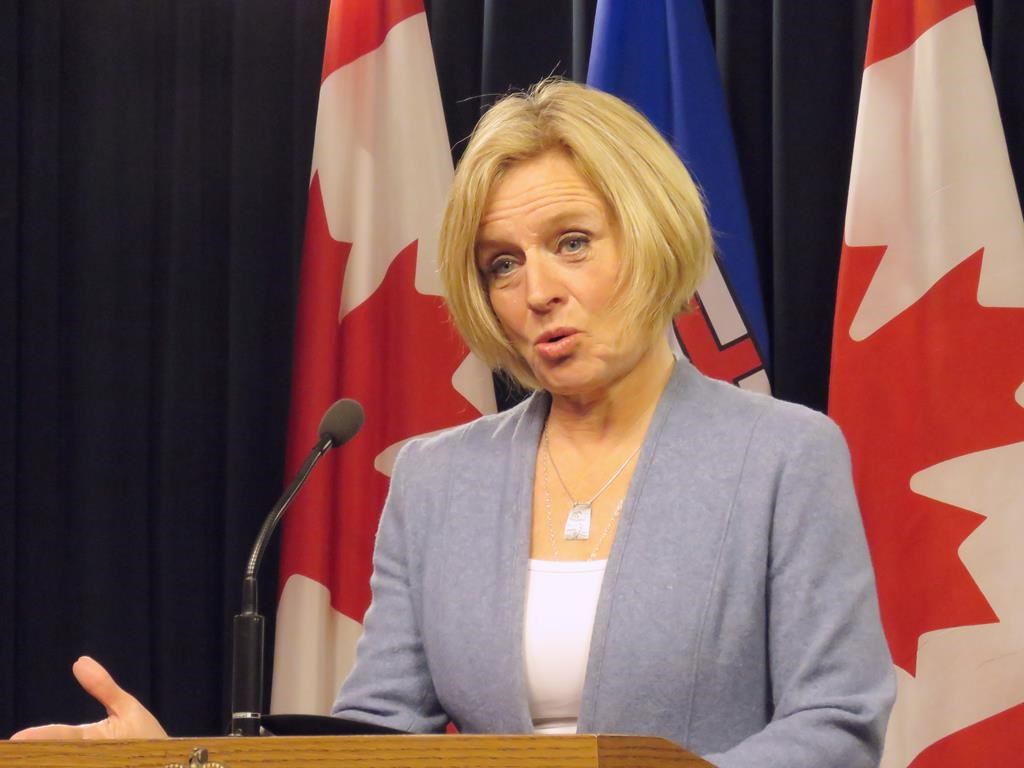 Alberta Premier Rachel Notley speaks at the legislature in Edmonton on Tuesday, October 9, 2018. Photo by The Canadian Press/Dean Bennett
Previous story
Next story

But Kenney is accusing Notley of exploiting a one-off event orchestrated by a "kooky" organization against the UCP and its candidates.

Candidates running for the UCP nomination in the constituency of Edmonton West Henday posed for pictures at a pub event last Friday with the Soldiers of Odin, an anti-immigration group that originated in Finland and has been linked to neo-Nazis in Europe. The Canadian branch says it is not racist but more of a neighbourhood watch.

"Why are these folks showing up at these events and feeling as though they are welcomed?" Notley said at the legislature Tuesday.

"If you use dog-whistle politics enough, eventually soon enough people are going to respond to the whistle."

She described such politics as a "subtle embracing of issues that are designed to attract people with fairly extreme opinions to your movement. That's something that we've been seeing on the right more and more."

Two of the candidates, Kenney, and the riding association say the Soldiers of Odin crashed the event and the candidates didn't know who they were with when they posed for photos. They unreservedly denounced the group's views.

Notley said what happened highlights a trend in right-wing politics and Kenney's party. She noted that others running for candidacy in the UCP in recent months have either been rejected or allowed to run despite expressing bigoted comments.

"This is not an isolated incident," said Notley.

"We also look at this pattern that we see developing with respect to the proliferation of candidates with that (UCP) party that also appear to hold views that are rooted in hate."

She said such views must be challenged loudly and repeatedly, and called on Kenney to do more than send out statements on social media.

"He needs to speak directly to it ... and very definitively declare, not only his position, but what they will do to stop it from happening in the future."

Kenney, speaking in Calgary, noted that one of the people seeking the nomination in West Henday is Cree and another is Metis.

"It's unfortunate but I'm not entirely surprised the premier is going into gutter politics," he said.

"It would be nicer if the premier were actually to stand in solidarity with our Aboriginal nomination candidates, who were obviously the targets of political mischief.

"This has nothing to do with our candidates."

Since taking leadership of the UCP, Kenney has made it clear in speeches and statements that those who foster hate have no place in his party and that they will not be allowed to run in the spring election.

There have been controversies with some UCP candidates.

Todd Beasley was disqualified as a candidate in Brooks-Medicine Hat in the summer after making anti-Islamic comments on social media.

Also in the summer, Sandra Kim was allowed to run for the nomination of Maskwacis-Wetaskiwin despite homophobic social media comments from 2015.

Cindy Ross, a one-time nominee for Calgary Fish Creek, apologized last month for online comments she made years ago opposing the opening of a mosque in Fort McMurray.