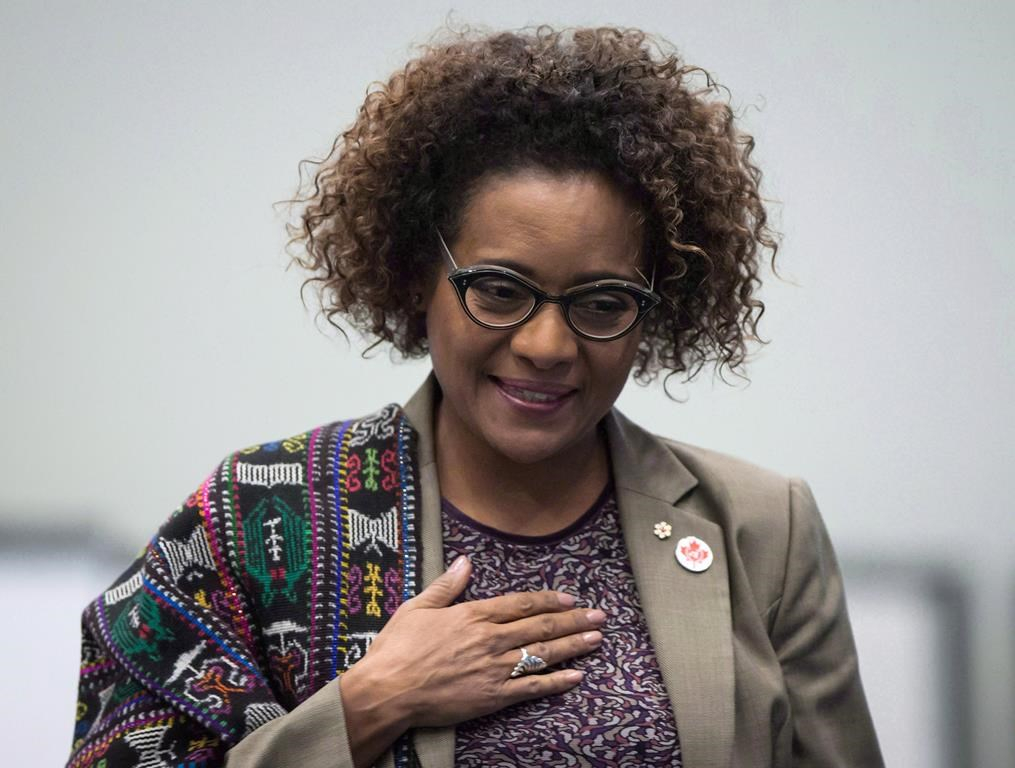 Michaelle Jean walks to the podium to address a youth as peace builders working session at the 2017 United Nations Peacekeeping Defence Ministerial conference in Vancouver, B.C., on Nov. 14, 2017. File photo by The Canadian Press/Darryl Dyck
Previous story
Next story

Delegations from Canada and Quebec arrived in Armenia Wednesday ahead of the summit of la Francophonie, intent on putting the controversy over the election of a secretary general behind them.

But Michaelle Jean, the former governor general and current holder of the top job at the international body, showed no signs of abandoning her candidacy despite losing the support of her home country and province.

Jean, who has been secretary general of the organization of French-speaking nations since 2014, is seeking a second term and will be up against Rwandan Foreign Affairs Minister Louise Mushikiwabo when members make their choice this week.

The Canadian and Quebec governments announced Tuesday they were withdrawing support for Jean's bid to remain in the job, backing instead the "consensus" candidate, Mushikiwabo.

Jean still does not seem to believe her fate is sealed, suggesting through a spokesman on the eve of the two-day summit in the Armenian capital of Yerevan that no such consensus exists.

"A consensus implies a debate that is held according to the standards," Jean spokesman Bertin Leblanc said. "With the summit beginning (Thursday), no doubt this discussion will take place among the heads of state and of governments behind closed doors."

Leblanc said on the weekend that Jean had no intention of dropping out.

Jocelyn Coulon, a political scientist at the Universite de Montreal, said Jean finds herself completely isolated. Among la Francophonie's 54 full members, only Haiti — her country of birth — continues to back her, he said.

"I imagine that Madame Jean thinks that she has to prove herself, and she's doing this on principle," Coulon said. "She thinks she's the best to continue in this job, and she's convinced that she will be able on Friday morning, when she meets with the heads of state, to change their minds. But I doubt that."

Trudeau's office did not tell the media about the meeting beforehand and would not say what was discussed. But a government source said the message has not changed: Ottawa will endorse the consensus choice that emerges from the summit.

Several federal government sources recently told The Canadian Press the re-election of Jean, who was chosen in 2014 in part due to the absence of a clear African front-runner, would be "difficult." They said that if a consensus emerged, Canada would join it to avoid having the summit overshadowed by a fight for the top job.

Traditionally, the selection of a secretary general is by agreement, not through a vote.

Mushikiwabo has support from France and the African Union countries, leaving Jean's chances of retaining the top job slim, particularly without Canada and Quebec in her corner. Sources said the Canadian government tried unsuccessfully to convince Jean that re-election was improbable.

Legault tweeted Tuesday that his government would not support Jean and would join what he called the "African consensus." He said it was time for "a new style of management" in the organization.

A spokesman for the federal minister responsible for la Francophonie, Melanie Joly, said in an email Tuesday that Canada was ready to "rally around the consensus."

Jean has been dogged by accusations of excessive spending during her time as head of la Francophonie. Quebecor media outlets reported she spent $500,000 renovating her rented Paris residence, as well as $20,000 on a piano, but she's defended the spending in interviews.

The Rwandan candidate is not without critics. French President Emmanuel Macron has backed her, but four former French ministers responsible for the la Francophonie signed an open letter last month saying Mushikiwabo has no place at the head of the organization.

The candidacy is controversial because of Rwanda's poor human-rights record and the fact Rwanda replaced French with English in its education curriculum in 2010.

Canada may have chosen to abandon Jean partly for geopolitical and strategic reasons as it tries to secure a seat on the UN Security Council in 2020.

— with files from Sidhartha Banerjee in Montreal.