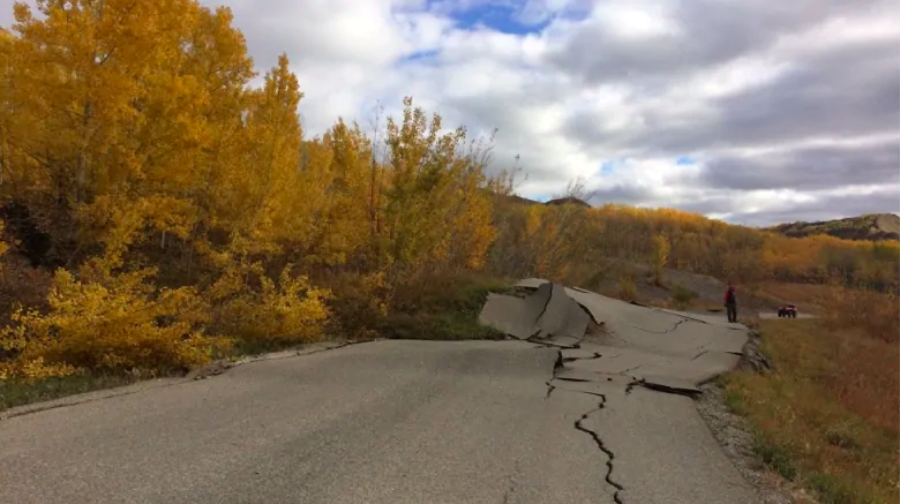 A landslide in Northern B.C. is just one kilometre from Site C. Photo from B.C. Ministry of Transportation and Infrastructure
Previous story
Next story

The Site C dam construction is just one kilometre away from an unpredictable landslide that has forced about 200 residents from their homes in Northern B.C., near the Peace River.

The landslide caused major cracks in the road to the community of Old Fort, B.C., causing the Peace River Regional District to issue an evacuation order for all residents of Old Fort.

There are about 60 homes and about 200 residents in Old Fort, a subdivision near Fort St. John.

The Ministry of Mines, Energy and Petroleum confirmed the distance in a statement, but said the landslide is not connected to work on the dam, a controversial, massive $10.7-billion dam and electricity generating station being built on the Peace River.

When asked if the ministry would reassess the safety of the dam, given the instability of the land nearby, the ministry declined to comment.

The NDP government pledged to send the project for review last year, but in December it announced it would go ahead to avoid $4 billion in debt from money that was already spent and remediation costs.

Critics have suggested that energy from Site C is needed to power an LNG plant announced last week to be built in Kitimat, but others have said B.C. already has enough energy to fuel that new development.

At a community meeting Monday, residents asked why they’d been evacuated, but Site C wasn’t. They asked if the Site C construction site is still safe and whether it could be shut down.

Adrian Pooley, a mInes Inspector at the B.C. Ministry of Mines, Energy and Petroleum Resources, told residents at the meeting that he couldn’t comment on Site C.

Residents were very upset to be out of their homes and concerned about pets, medications and their belongings, such as vehicles. They were told they would be able to get in by boat, but that they could only take out what they could carry on a boat.

Rhonda Mellafont, an engineering geologist at Westrek Geotechnical Services, did an aerial tour of the area and had unsettling news for the residents.

“It’s going to get worse before it gets better, Mellafont said, noting that rain, snow and winter conditions might destabilize the land even more.

She characterized the slide as “a very deep-seated failure” and said there isn’t enough information to determine a cause at this time.

The slide is still active and is moving at about four metres a day, Mellafont said. There are tension cracks showing and it is difficult to predict when it will stop or which direction it will go.

“These landslides are very unpredictable,” Mellafont said. “It’s not safe out there.”

Residents were told it could be next summer before they will be back in their homes.

Rodney Halfner, from Yellowhead Road and Bridge, showed photos of the road on October 1, when there were no cracks, and on October 7, when the cracks were more than a metre wide. He showed topsy-turvy power poles that were no longer on solid ground.

Scott Maxwell, executive director at the Ministry of Transportation, told residents the ministry is working on opening another road access to the community.

Another high-profile B.C. landslide happened in August 2014, when the Mount Polley mine’s tailings dam broke, sending water and mining waste into nearby lakes and rivers.

The Great Mother has had

The Great Mother has had about enough of us and our pipedreams I'm thinking......more money into an expanding sink hole?

Would serve us all right.