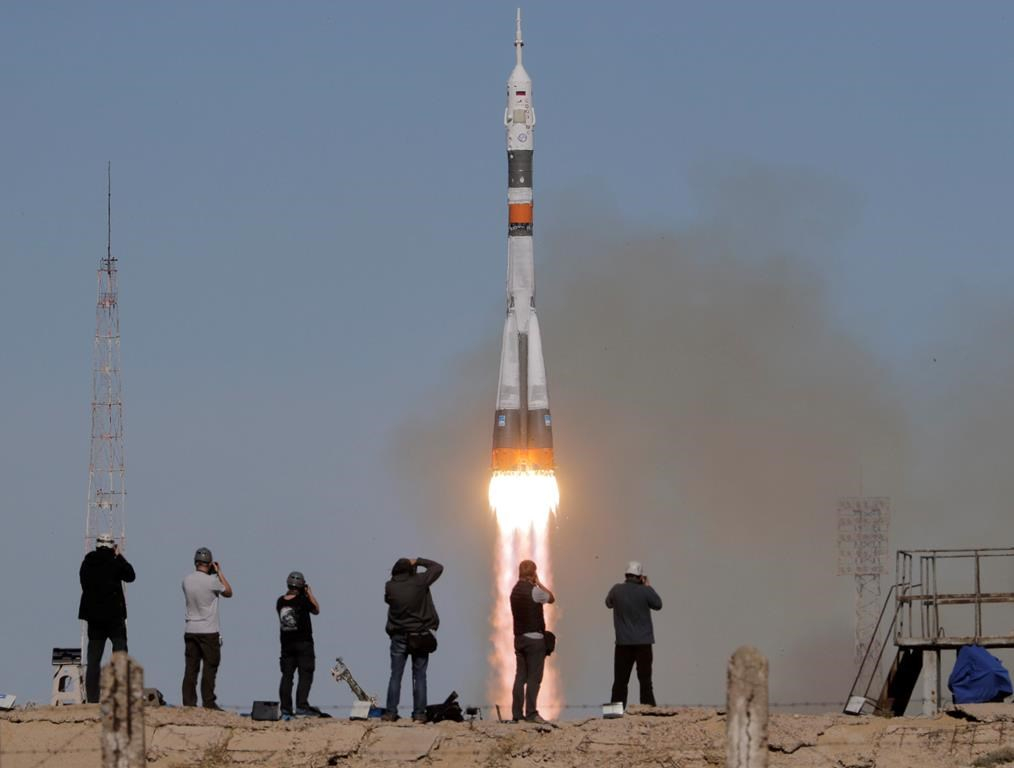 Canadian astronaut David Saint-Jacques' scheduled space voyage in December is in doubt following a rocket failure Thursday that forced a Soyuz capsule with two astronauts on board to make an emergency landing, Canadian officials say.

Russia announced Thursday it was suspending manned space launches pending an investigation into what happened when the Soyuz capsule transporting NASA astronaut Nick Hague and Roscosmos' Alexei Ovchinin automatically jettisoned from the booster.

U.S. and Russian space officials said Hague and Ovchinin were safe after a rocket failed two minutes into their flight to the International Space Station, forcing an emergency landing on the steppes of central Kazakhstan.

Saint-Jacques, 48, of St-Lambert, Que. was part of the backup crew for Thursday's failed space flight and was on site for the launch.

He is scheduled to be aboard a Dec. 20 launch to the space station from the Russia-leased Baikonur cosmodrome in Kazakhstan, in what would be his first trip to the International Space Station.

Retired Canadian Astronaut Chris Hadfield said Thursday that if the rocket problem was simple and diagnosable, Saint-Jacques could be up in space "not too far away from the time they were planning.

"But if it's a complicated problem — and rocket failures are almost always complicated problems — it will take longer for them to sort out what it was; so it could be many months," Hadfield said during a question-and-answer session he hosted on Twitter.

Hadfield said the three astronauts currently living on the International Space Station "are basically marooned there — indefinitely at this point, until we can get another vehicle out there."

Former Canadian astronaut Robert Thirsk was the first Canadian to fly on a Soyuz capsule, when he travelled to the International Space Station in 2009 for a six-month mission.

He said in an interview that depending on the cause of the rocket failure, the remedy might be something that could be implemented in days.

But the Soyuz capsule destined for Saint-Jacques's trip in December is currently being assembled, Thirsk said — and if that vehicle is similarly affected to the one that failed on Thursday, "then no, we aren't going to launch in two months.

"It will be months away (following) the corrections that need to be put in place."

He said all manned launches will be suspended pending an investigation into the cause of the failure, adding that Russia will share all relevant information with the United States.

Gilles Leclerc, director general of space exploration at the Canadian Space Agency, said the Russians have a good track record of identifying and quickly resolving problems.

"We'll see if there's an impact on the launch manifest to the space station," he said from the agency headquarters in Longueuil, Que. "Right now, it's wait-and-see for the Canadian Space Agency."

Leclerc said the plan remains "to launch David Saint-Jacques as soon as possible to the space station: conducting experiments, doing science and being the figurehead of the human space flight program for Canada."

He added that Saint-Jacques, who was travelling to Moscow on Thursday before returning home to Houston, would not lose his spot on a launch in the event of any delays. Saint-Jacques himself was not immediately available for comment.

"Canada has a crew allocation on the International Space Station — on flight every four years or thereabouts," Leclerc said. "There will be a Canadian flying to the space station very soon."

Thirsk said the crew inside the Soyuz capsule likely weren't feeling any fear when they noticed one of the rockets had failed.

"Fear would be put to the back of your mind," he said. "We are trained to compartmentalize. If you're doing a demanding mission, then you have to really focus on that task at hand and you don't have time to think about injury or death or family.

"You just really focus on the next action you're taking."

Leclerc said astronauts train for all contingencies, including ballistic landings like the one on Thursday in which astronauts are subjected to heavy gravitational forces.

"It was a High-G experience. People who have gone through this type of incident report it's like a car crash," he said. "But they appear to be in good physical shape."

The space agencies said the astronauts were in good condition after their capsule landed about 20 kilometres east of the city of Dzhezkazgan, Kazakhstan.

— With files from the Associated Press.