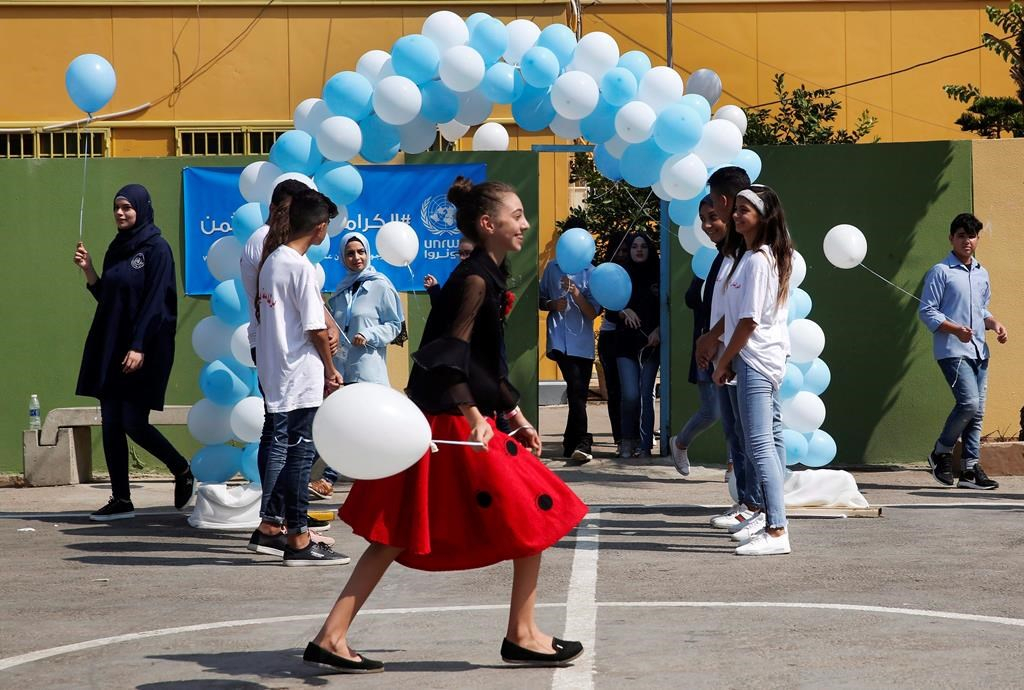 Palestinian refugee students attend a ceremony to mark the return to school of a new year at one of the UNRWA schools, in Beirut, Lebanon, on Monday, Sept. 3, 2018. File photo by The Associated Press/Hussein Malla
Previous story
Next story

Canada is contributing $50 million to the United Nations Palestinian refugee agency — after the United States decided to stop funding what it called an "irredeemably flawed" organization.

The new Canadian funds announced today will be allocated over two years to assist the health and education efforts of the United Nations Relief and Works Agency for Palestine Refugees, or UNRWA.

The Trump administration decided in August to withdraw US$300 million in support, ending the United States' status as the largest donor for an organization that had been trying to help more than five million Palestinian refugees.

Israel has accused the agency of being biased, fuelling its conflict with the Palestinians and promoting hatred against the Jewish state.

But it also says the money will assist UNRWA with "its ongoing efforts to improve neutrality within the agency and its operations."

"This assistance demonstrates how Canada and UNRWA are working together to ensure respect for the humanitarian principles of humanity, neutrality, operational independence and impartiality," said a statement from Global Affairs Canada.

Canada is earmarking $40 million towards the basic education, health and livelihood needs of millions of Palestinian refugees, especially women and children.

Another $10 million is aimed at helping 460,000 Palestinian refugees in Syria and Lebanon.

The new Canadian funds come two weeks after the European Union pledged an extra US$46 million to UNRWA to support its health and education services.

"This new funding to UNRWA is urgently needed, and it will bring some predictability to the agency as the needs on the ground are increasing," she said in a statement Friday.

Israel, meanwhile, has praised the U.S. decision to cut UNRWA funding, which the Trump administration said was an "irredeemably flawed" organization when it announced its decision at the end of August.

Kushner also reportedly called for a "sincere effort to disrupt UNRWA" in the email.

Last month, Palestinian leader Mahmoud Abbas told the UN General Assembly that the agency does work that is critical to the well-being of his people, but the U.S. simply wants to "obliterate it altogether.''

Just another reason Mr. Trudeau needs more money coming into general revenues. He is very adept at spending it. Hopefully on October 21 2019 we can vote in a government that is more fiscally responsible.