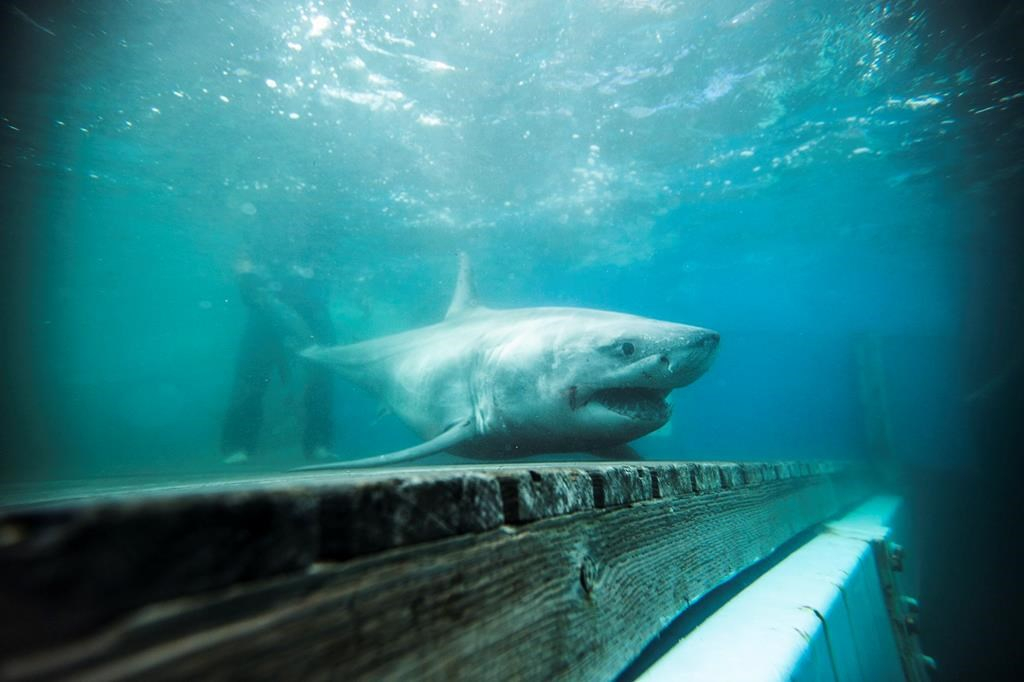 A white shark found in Canadian waters is shown off the coast of Nova Scotia in this recent handout photo. Handout photo by Ocearch/Robert Snow
Previous story

The Ocearch research team came to Nova Scotia this fall on a hunch.

Could the movements of two tagged great white sharks — dubbed Hilton and Lydia — suggest the mysterious predators have an undiscovered mating site off Canada's Atlantic coast?

The team hoped to capture and tag one shark on their first Nova Scotia foray.

Instead, they saw more than 10 sharks, collected samples from seven, and tagged six.

Expedition leader Chris Fischer was to leave Nova Scotia Saturday after wrapping what he called an "historic" expedition that offered an "enormous breakthrough" and opened new horizons for the organization's work to solve the complicated puzzle of the endangered North Atlantic white shark population.

"It was really surprising to come up here and see so many animals," the American researcher said.

"I think that there's a lifetime of work to do up here based on what we saw, for many people."

The Ocearch team, which includes 26 researchers from 19 U.S. and Canadian universities and labs, were in search of new data on the species, hoping to shed light on their life patterns and get scientists a bit closer to stabilizing their population numbers.

Satellite tags affixed to the sharks will collect data on everything from water temperature and salinity levels to their movements and feeding behaviours.

Three of the newly tagged sharks, males Nova and Hal and female Luna, were named for Nova Scotia, Halifax and Lunenberg, N.S., respectively. Another female, Jane, was named for the ship captain's mother.

Along with new friends Jefferson and Cabot, the public will be able to follow the sharks' movements on Twitter. Both Lydia and Hilton have more than 40,000 Twitter followers, bringing a wide audience to the group's research.

Fischer said the Nova Scotia team has heard from all the newly tagged sharks so far except for Jane, but expects to hear from her soon.

The information gathered from the sharks' tags and samples should help scientists paint a picture of the North Atlantic species' lives in a clearer way and plan a path forward to protect them.

Fischer says this requires an international effort, one that was evidenced by the presence on the expedition of Canadian federal fisheries scientists.

"Now that we know we can get them (sharks) here, we're hoping to see a lot more Canadian scientists jump on board next year," said Fischer, saying Ocearch is already discussing the logistics of a return trip in 2019.

Fischer noted that the age and sex ranges of the sharks found here have marked Canadian waters as an untapped gold mine for researchers -- and notably, put the area on the map as a rare place with predictable access to the elusive creatures.

Nova Scotians have been watching the team's activities with great interest, but luring sharks so close to popular beaches have worried some residents.

Ocearch's activities near Lunenberg raised some public concern about whether baiting sharks close to shore could change the animals' patterns and pose a risk to beachgoers.

Federal fisheries officials issued a statement that they had advised Ocearch to move away from busy coastal areas while working. But they also noted that "it is not anticipated that white sharks will change where they forage for food as a result of any chumming that occurs as part of this research."

For Fischer, the public concerns demonstrate some of the misconceptions and fears people have about shark behaviour and their presence in nearby waters.

"People have an idea in their mind that the big white sharks live out in the ocean. They don't, they live right on the beach," Fischer said.

Fischer added that the presence of seals near the beach draws sharks, and many of the animals were captured without the team chumming the water.

The overall health of the ocean depends, he said, on saving the top-of-the-food chain predators like the Atlantic great whites, who he calls "balance keepers," and "lions of the ocean."

He said the sharks keep other species in check, including those relied upon by fishing industries like lobster and cod.

The real thing to fear is not the animals themselves, but a world without them, he said.

"We should be terrified of an ocean that's not full of large sharks," he said.