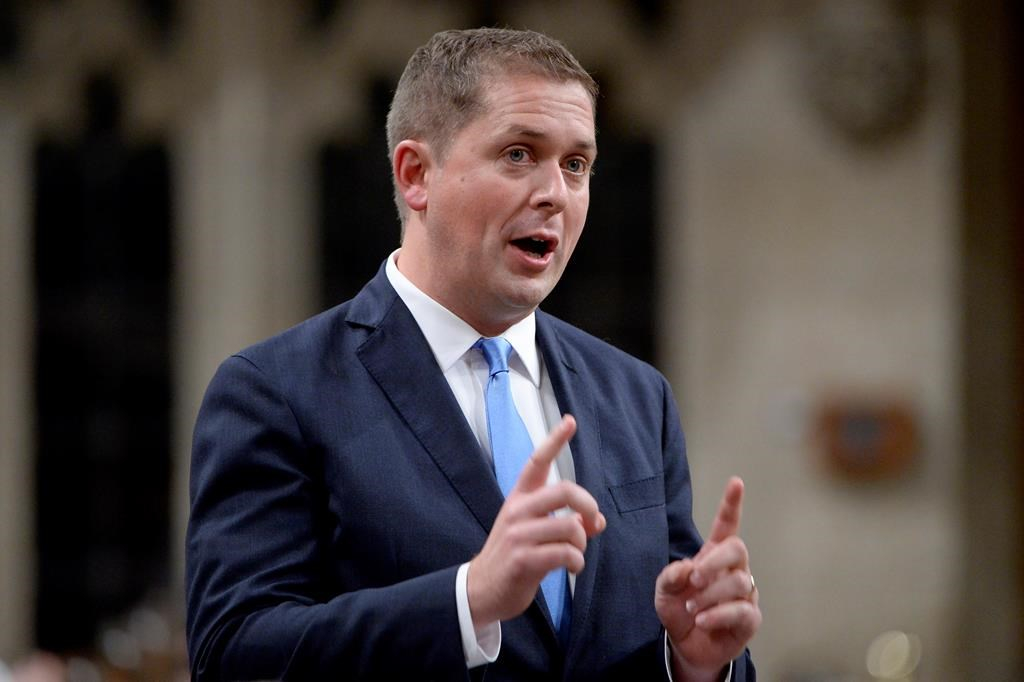 Conservative Party Leader Andrew Scheer rises during question period in the House of Commons on Parliament Hill, in Ottawa on Tuesday, Oct. 2, 2018. File photo by The Canadian Press/Adrian Wyld
Previous story
Next story

Conservative Leader Andrew Scheer is opening a new front in his party's fight against the revamped NAFTA deal, saying he would have done better than Justin Trudeau.

The United States is measuring its success in the newly revised North American Free Trade Agreement by what it gained, Scheer tweeted Sunday. The Liberal government, on the other hand, is defining its achievement by what it didn't give up.

Scheer's broadside comes as Parliament prepares to resume sitting after the Thanksgiving break, offering a glimpse of how the Conservatives will try to persuade the public they could have wrested a superior deal from the Trump administration.

Scheer argues his party would not have had to sign the new U.S.-Mexico-Canada Agreement because it would have negotiated a more attractive one for Canadians.

"Would I have signed this deal?" Scheer asked in his tweet. "I would have signed a better one."

He offered no details about those improvements, and his spokesman indicated he was not immediately available for an interview, having just returned from a trip to India to promote trade with Canada.

However, Scheer has accused the Liberals of gaining no new ground in the USMCA deal and making concessions in the auto, dairy and pharmaceutical sectors.

The pact's ink was barely dry when the Conservatives began portraying the Liberal performance at the negotiating table as a fumbling misplay that will cost Canadian businesses, consumers and workers.

"The Liberals would like Canadians to believe that this is somehow NAFTA 2.0," Scheer told the House of Commons earlier this month. "In reality, this is NAFTA 0.5."

The Tories have also pointedly reminded the Liberals that punishing U.S. steel and aluminum tariffs remain in place.

Freeland has touted several provisions as Canadian wins, including removal of a clause that undermined energy sovereignty and the scrapping of a dispute-settlement mechanism that allowed companies to sue Canada for millions.

"Andrew Scheer is showing a lot of Monday morning courage," she said Sunday in a statement to The Canadian Press. "He and Stephen Harper argued repeatedly that Canada should drop our demands and rush into a bad deal. We refused to capitulate, we held out, and we got a good deal for Canadians."

The NDP has echoed many of the Conservative criticisms of the deal, saying it will hurt dairy, poultry and egg farmers and producers.

As part of the implementation process, the new deal is likely to be presented to the House of Commons for discussion.

The New Democrats say the Liberals owe it to Canadians to explain the pact and how it will affect their livelihoods.