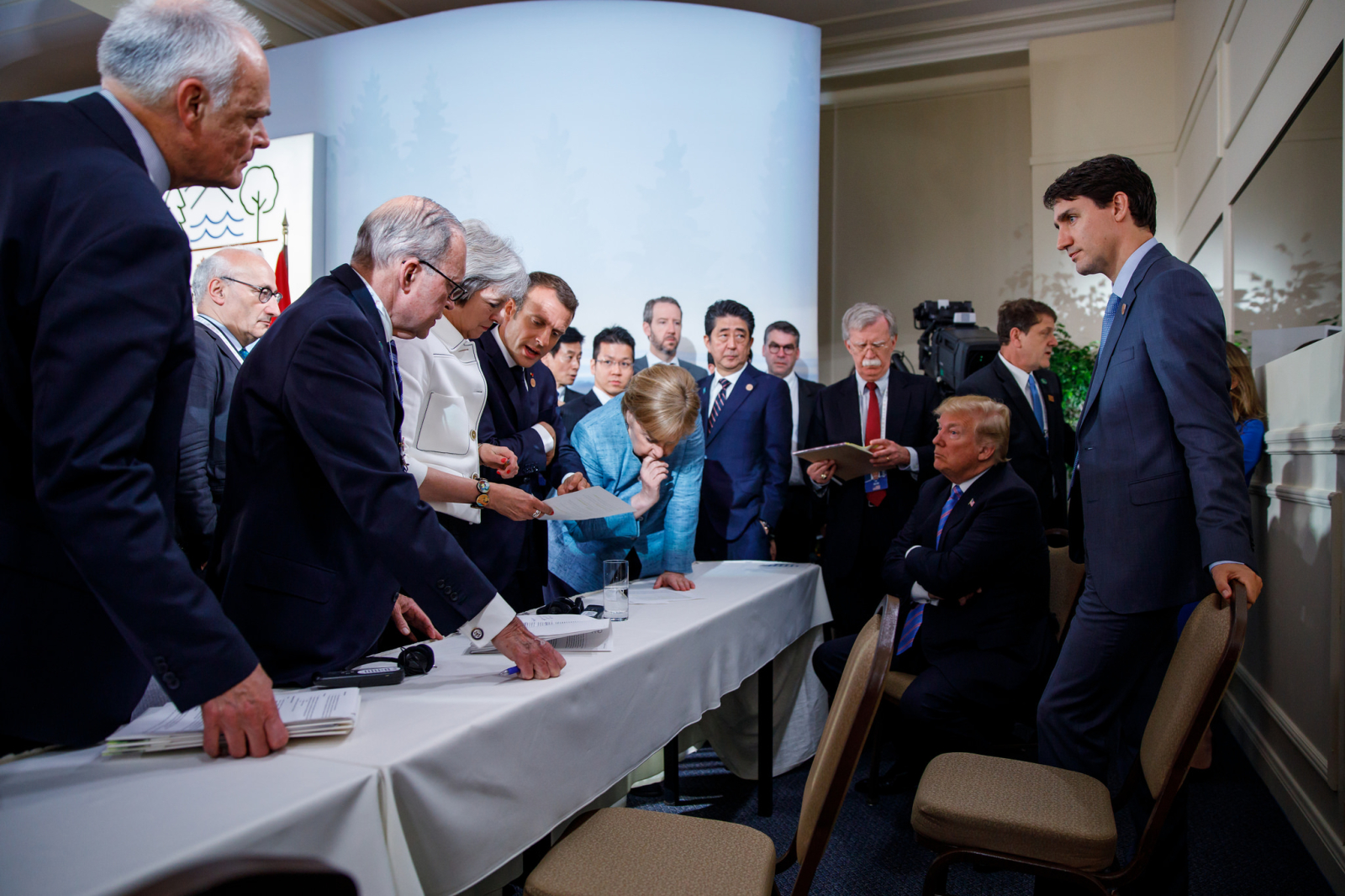 Peter Boehm, far left, then the G7 sherpa for Prime Minister Justin Trudeau, far right, said Trudeau asked him if he'd like to serve in the Senate on his last day on the job. Photo by PMO / Adam Scotti
Previous story
Next story

Peter Boehm says Prime Minister Justin Trudeau popped the question during a briefing on his last day as a public servant: would he like to serve in the Senate?

“I said, ‘I’d be honoured, it would be an interesting thing to do,’” said Boehm, a career diplomat and bureaucrat who was most recently Trudeau’s personal representative and deputy minister for the G7.

That day, Sept. 28, was the first time Trudeau raised the subject with him, though he had applied to be a senator “two years ago,” he told National Observer Monday. He spoke to him again two days later, he said, when the prime minister called him and “made it more official.”

“I had a three-day retirement,” said Boehm.

He was among three people appointed by Governor General Julie Payette on Oct. 3 on the advice of Trudeau. They are a few of the latest results of the prime minister's open nomination process in which people apply for Senate positions.

Less than two weeks earlier, Trudeau had congratulated Boehm on his “upcoming retirement.”

Boehm has been a visible fixture at the prime minister's side in recent years.

He's on the far left in a famous photo by Trudeau's official photographer, for example, showing a particularly tense-looking meeting with U.S. President Donald Trump and other G7 (Group of Seven) leaders in Charlevoix, Quebec in June.

He's also the public servant who briefed civil society groups waiting to see what position the government would take going into the summit of the G7 leaders of Canada, France, Germany, Italy, Japan, the United Kingdom, and the United States.

Foreign Affairs Minister Chrystia Freeland made a point in Charlevoix of acknowledging how hard Boehm was working at the summit and how little he slept.

Boehm is on record saying the previous government of former prime minister Stephen Harper "suppressed" the work of its diplomats.

This public profile now means that, before he’s even sworn in, Boehm has found himself fending off accusations of being too close to government.

“(Boehm is) a senior bureaucrat who was serving at the whim of the government, who retires, and a few days later — nudge nudge, wink wink — finds himself again called upon by the prime minister to serve the government,” Housakos said in an Oct. 12 interview.

“We all know that senior bureaucrats...they’re used to serving the government of the day.”

Boehm’s Senate appointment was announced along with University of Alberta lecturer Patti LaBoucane-Benson and journalist Paula Simons. They are scheduled to be sworn in on Tuesday along with Sudbury lawyer Josée Forest-Niesing and Brian Francis, chief of the Abegweit First Nation, who were named to the Senate on Oct. 11.

They were all recommended by the Independent Advisory Board for Senate Appointments, which was created with the view of ending partisanship in the upper chamber. It says it adheres to a detailed appointments process.

Housakos, a former Senate speaker, called the advisory board a “complete sham,” and suggested that the board members could not be independent themselves.

But Boehm defended his position by noting that, in addition to serving Trudeau, he was also Harper’s G7 and 'Nuclear Security Summit representative, and ambassador to Germany, and was also former prime minister Jean Chrétien’s ambassador to the Organization of American States.

“Yes, we serve the government of the day — whoever the government is,” he said. “Nudge nudge, wink wink? No. I applied for this two years ago, and wasn’t sure if it would succeed or not.”

Boehm said that he applied to be a senator after examining his options two years ago for what he might do after 37-year public service career.

“I had a few other irons in the fire — those of us who have had senior jobs in government tend to do that, whether it’s teaching, or looking at boards (of directors),” he said.

“As a designated public office holder I couldn’t lobby for five years — I knew all of that,” he said, referring to restrictions in the Lobbying Act.

He said he went through the application procedure, and heard nothing until “several months ago,” when the committee overseeing the independent vetting process told him he had advanced to another stage.

At that point, he said, he was asked to provide more information on his financial and property status, part of the assessment criteria.

“The prime minister never raised the appointment with me until my very last day of work, when I briefed him on where we were on the G7 — this was following the environment, oceans and energy ministerial in Halifax,” he said.

“I briefed him on how we were wrapping things up for our year, I briefed him on my trip to Paris, in terms of passing the torch over to the French, who are succeeding us — and he was fine with that. And then he asked me a question — and that was on the 28th of September — would I like to serve in the Senate?”

National Observer asked the Privy Council Office for details surrounding what date the advisory board began evaluating Boehm, what date it reached its conclusion about him, and how it came across his name for an appointment.

"We are not in a position to discuss individuals’ applications or their candidacies," said Stéphane Shank, media relations manager for the PCO.

Shank said all Senators appointed on the advice of the prime minister have been chosen using the appointments process, and that since summer 2016, all Canadians need to apply to be considered. Applications are then reviewed by the board.

This seems like a conflict of interest. He was duty bound to be impartial, but he had a self-interest in currying favour in a partisan way.

And that’s how being at the

And that’s how being at the through keeps on.

Nudge, Nudge, wink, wink? Partisan? politics? Just how, you self righteous critics, do you think anything in this world; politics, business, health care, social work, education? gets done without the networking, vetting, and calculation that is integral to our species. Nothing occurs in a vacuum. What matters ultimately is the result. The process of achieving anything is always a negotiation, a compromise. What matters in a democracy is representation and responsibility. Casting aspersions is lazy - actually trying to make good things happen is hard work and it takes brains, experience, and persistance. Why waste any of those qualities when they are on offer? Impartiality is largely a myth and even judges who supposedly embody it are subject to personal preferences. Honesty and integrity are more valuable than impartiality.

It doesn't pass the smell

It doesn't pass the smell test.