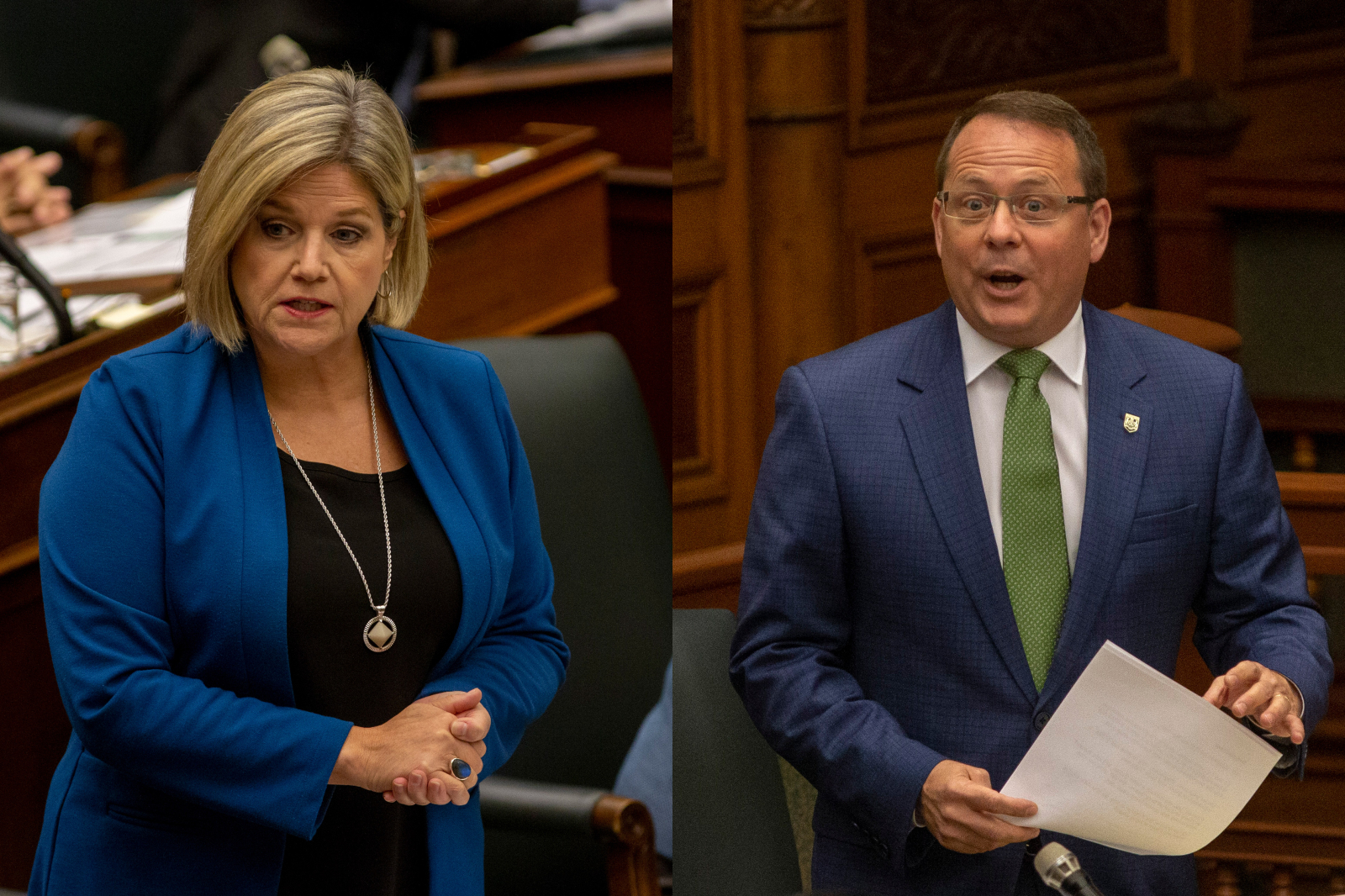 Every two weeks, Mike Schreiner gets three minutes to ask a question in the Ontario legislature. It’s as brief as a YouTube or Facebook video, he notes, but he dedicates the morning to choosing the right topic, preparing, writing and editing his statement each time. It's his chance to make his beliefs known.

“It's hard to make substantial contributions to a piece of legislation, when you only have three minutes to speak on it,” the Ontario Green Party leader told National Observer in conversation.

Wearing his trademark green tie, a smiling Schreiner stands behind his desk with his back against the windows of his large office, where the walls remain blank save for a band of Tory blue, a reminder of a previous era of Queen’s Park politics. Just over 100 days ago, this was the office of Lisa MacLeod, now minister of children, community and social services in Doug Ford's Progressive Conservative government.

There have been many challenges for Ontario’s first Green Party MPP as an independent member of the opposition in the first 100 days of Ford's government. Representatives of groups from across the province seek meetings to find out where he stands on issues other than those traditionally associated with the Green Party. In the legislature, members across the aisles tease him: “Come on Mike.” or “You know you’re with us, Mike.” Schreiner smiles, and diligently educates himself so he's prepared to speak his mind on any issue that comes his way.

And then there’s his personal challenge to match, if not surpass, Finance Minister Vic Fideli’s yellow tie collection. “I want to collect the largest green tie collection,” he told visitors, noting his search for a green tie with yellow specks just for budget day.

Schreiner’s presence in Queen’s Park means there are four parties in the legislature for the first time since the 1940s. “The standing orders (of the legislature) don't imagine a fourth party,” he said. “They kind of imagine three official parties and maybe an independent.”

But, on June 7, 2018, Ontarians ushered in a new political landscape for the province. The New Democratic Party won 40 seats to form the official Opposition. The Tory government holds 76 seats. The defeated Liberals fell to one member short of official party status with seven elected MPPs. Along with the Green Party leader, that makes eight independents at Queen’s Park, “which is just something that is not the norm here,” Schreiner said. "(Queen’s Park is) more complicated today.”

‘It's challenging to watch the way that the premier is behaving': Horwath

The onset of this complicated reality has been obvious to NDP leader Andrea Horwath since she first went against Doug Ford during the election campaign; the challenges have only increased since they both were elected, she told National Observer.

"We have a greater responsibility as the only opposition party that has official status," Horwath, the first NDP opposition leader since 1987, said in an interview with National Observer. “For me, the focus has to remain on the government and on making sure that we are holding them to account every way possible.”

Horwath and her caucus have struggled to block any of the bills tabled in Ford’s first 100 days of governance, but they have prepared for battle as best they can. The large caucus has allowed them to ensure they can dedicate an NDP critic to every cabinet minister.

Even so, Horwath said she wasn’t prepared for such a combative legislative environment, where members of the public were shut out of public galleries on more than one occasion during debates over Ford’s proposal to cut Toronto city council. If she could have brought them back in, she would have, she said without hesitation.

Horwath herself was the first member to be escorted out of the legislature during one of the first debates, in a moment that has defined her first 100 days as opposition leader. She pointed and yelled “shame” at the government side as she was led to the door. The public's presence has been “affirming,” she said. Queen’s Park, today, is more than the members sitting in the legislature, she notes. It’s “literally millions of people across the province who have joined with us to fight literally at the gates.”

She expressed slight anger when noting the number of times Ford has dismissed the public, or in fact her questions, by simply yelling one of two government slogans: "Ontario is open for business," or promise made, promise kept." She worries about the extent to which Ford is prepared to go "to hobble the opposition and prevent us from holding government to account."

“The overheated way in which the premier responds to basic questions from the opposition is something I didn't expect, to be honest with you,” Horwath said, shaking her head. “It's challenging to watch the way that the premier is behaving”

Much of the opposition work in Ontario’s legislature has involved simply bearing witness to rushed bills and dramatic reversals of past legislation affecting Ontario’s environment, labour and education sectors. With a majority government in power, there are limited options to oppose, say both Horwath and Schreiner, and even less opportunities to propose.

The Ford government's extensive efforts to repeal climate change policies, along with such other major decisions as cutting Toronto city council in the middle of an election campaign, are part of “a disturbing trend” that limits public participation, Horwath said.

“This government is dragging us backwards,” Horwath said. “It shows a massive disrespect for everyday Ontarians and for Ontarians who are stakeholders and have been engaged in these public policy matters...and we don’t know what the government’s going to bring next.”

Schreiner expressed hope for more constructive conversations moving forward. “The Ford government, I think, has been incredibly irresponsible in tearing things down without talking about how we can build things up,” he said. He wished the government had allowed for a more substantial discussion around climate change policies and felt as rushed to produce a plan to tackle it as they did to repeal those of the former government. “They should've had the plan developed before they started dismantling."

Until this week, there had been no committee meetings on any bill – including the rushed cancellation of Ontario's participation in a carbon emissions cap and trade market. Schreiner, being a one-man political party, attends every debate and question period, even if he is not given the opportunity to speak on all topics. He’s met with Ontario Environment Minister Rod Phillips a few times, he said, and worries about how politicized many issues, especially environmental ones, have become in the first 100 days.

Schreiner is animated as he asserts that the world is "way too complicated" to fit on a simple left and right political spectrum; the same is true for issues, he notes. “In North America, climate change has become a left-right issue,” he said, “which is challenging for me because I don’t see it as a left-right issue at all.”

“It's just backwards and wrongheaded,” Horwath said on Ford's climate policies. “Whether (these policies) are coming from the Conservatives, or from the Liberals, at the end of the day, where's their obligation, their responsibility to start actually doing right by our environment? Where's the responsibility and obligation to start to take on pollution and polluters?”

While Horwath and Schreiner both noted the spread of populist politics in Ontario, Quebec and Alberta, Schreiner also noted, too, the slow but steady rise in Green Party seats across the country. In September, the New Brunswick Green Party won three seats in a historic breakthrough during the provincial election. Both leaders noted that the rise of polarized political movements are deeply concerning.

“I think all of us have a responsibility to speak honestly with people about the fears they have, the challenges we face, the anxiety they have around the fact that something isn't quite right in the world," Schreiner said, "And we need to channel that into more positive, more hopeful direction than some people would like to go.”

Horwath said she is concerned tensions that rise "when these kind of a right wing populist parties come to power on a sentiment of anger and frustration of the electorate" will "rock the stability of our province." "I know I'm not happy about it. I'm not happy at all," she said. "But my job is to be in that legislature and hold Premier Ford to account."

Schreiner noted that in Ontario, particularly, the status quo doesn't seem to be working. "It seems the new establishment is letting us down and now we need another way of doing things.”

Chris Hedges on Trump, failed democracy and the most dangerous forces in America