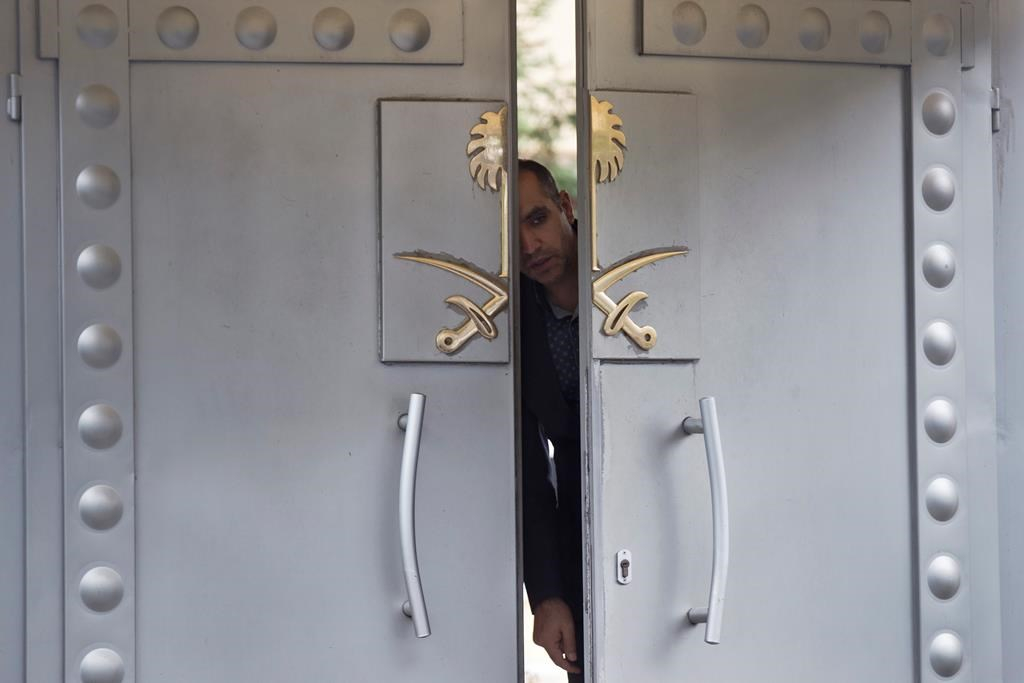 A security personnel looks out from the entrance of the Saudi Arabia's consulate in Istanbul, on Sunday, Oct. 14, 2018. Writer Jamal Khashoggi, vanished after he walked into the consulate on Oct. 2, 2018. Photo by The Associated Press/Petros Giannakouris
Previous story
Next story

Saudi Arabia on Sunday threatened to retaliate for any sanctions imposed against it after President Donald Trump said the oil-rich kingdom deserves "severe punishment" if it is responsible for the disappearance and suspected murder of Washington Post contributor Jamal Khashoggi.

The warning from the world's top oil exporter came after a turbulent day on the Saudi stock exchange, which plunged as much as 7 per cent at one point.

The statement was issued as international concern grew over the writer who vanished on a visit to the Saudi Consulate in Istanbul over a week ago. American lawmakers threatened tough punitive action against the Saudis, and Germany, France and Britain jointly called for a "credible investigation" into Khashoggi's disappearance.

Turkish officials have said they fear a Saudi hit team killed and dismembered Khashoggi, who wrote critically of Saudi Crown Prince Mohammed bin Salman. The kingdom has called such allegations "baseless" but has not offered any evidence Khashoggi ever left the consulate.

Already, international business leaders are pulling out of the kingdom's upcoming investment forum, a high-profile event known as "Davos in the Desert," and the sell-off on Riyadh's Tadawul stock exchange showed that investors are uneasy.

The exchange dropped by over 500 points, then clawed back some of the losses, ending the day down 264 points, or more than 4 per cent. Of 188 stocks traded on the exchange, 179 ended the day with a loss.

"Something this big would definitely spook investors, and Saudi just opened up for foreign direct investment, so that was big," said Issam Kassabieh, a financial analyst at Dubai-based firm Menacorp Finance. "Investors do not feel solid in Saudi yet, so it's easy for them to take back their funds."

In an interview scheduled to air Sunday, Trump told CBS' "60 Minutes" that Saudi Arabia would face strong consequences if involved in Khashoggi's disappearance.

"There's something really terrible and disgusting about that, if that was the case, so we're going to have to see," Trump said. "We're going to get to the bottom of it, and there will be severe punishment."

But the president has also said "we would be punishing ourselves" by cancelling arms sales to Saudi Arabia. The sales are a "tremendous order for our companies," and if the Saudis don't buy their weaponry from the U.S., they will get it from others, he said.

In a statement published by the state-run Saudi Press Agency, the kingdom warned that if it "receives any action, it will respond with greater action, and that the kingdom's economy has an influential and vital role in the global economy."

"The kingdom affirms its total rejection of any threats and attempts to undermine it, whether by threatening to impose economic sanctions, using political pressures or repeating false accusations," the statement said.

The statement did not elaborate. However, a column published in English a short time later by the general manager of the Saudi-owned Al-Arabiya satellite news network suggested Saudi Arabia could use its oil production as a weapon. Benchmark Brent crude is trading at around $80 a barrel, and Trump has criticized OPEC and Saudi Arabia over rising prices.

"If the price of oil reaching $80 angered President Trump, no one should rule out the price jumping to $100, or $200, or even double that figure," Turki Aldakhil wrote.

It's unclear, however, whether Saudi Arabia would be willing to unilaterally cut production.

Aldakhil added that Saudi arms purchases from the U.S. and other trade could be at risk as well. "The truth is that if Washington imposes sanctions on Riyadh, it will stab its own economy to death, even though it thinks that it is stabbing only Riyadh!" he wrote.

Prince Mohammed has aggressively pitched the kingdom as a destination for foreign investment. But Khashoggi's disappearance has led several business leaders and media outlets to back out of the upcoming investment conference in Riyadh called the Future Investment Initiative. They include the CEO of Uber, a company in which Saudi Arabia has invested billions of dollars; billionaire Richard Branson; JPMorgan Chase & Co. Chief Executive Jamie Dimon; and Ford Motor Co. Executive Chairman Bill Ford.

Egyptian Foreign Ministry spokesperson, Counselor Ahmed Hafez, said Egypt is following with concern the repercussions of the case of Khashoggi, and stressed the importance of revealing the truth of the matter through a transparent investigation, while emphasizing the gravity of pre-empting investigations and directing groundless accusations.

Khashoggi has written extensively for the Post about Saudi Arabia, criticizing its war in Yemen, its recent diplomatic spat with Canada and its arrest of women's rights activists after the lifting of a ban on women driving. Those policies are all seen as initiatives of the crown prince.