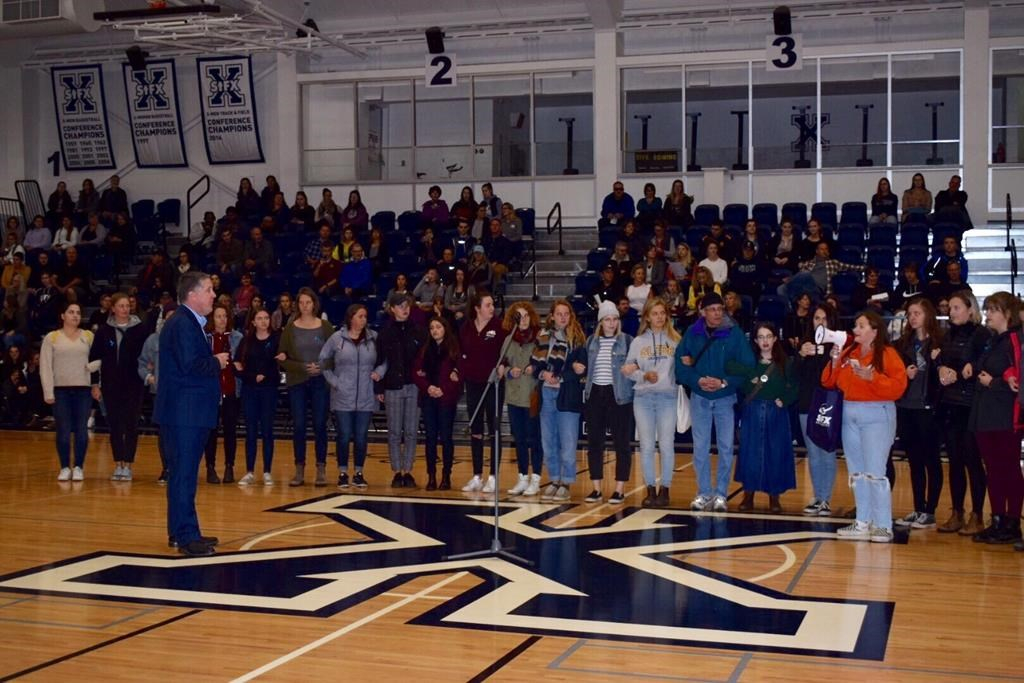 A group of students is set to launch a petition that demands St. Francis Xavier University strengthen its sexual violence policy, saying an apology from the school's president for its handling of an allegation of sexual assault doesn't go far enough.

On Saturday, nearly 40 demonstrators from the school and community confronted Kent MacDonald as he addressed potential students at the university's open house, and they plan to launch the petition on Monday.

The school recently came under fire after The Canadian Press reported that the university reversed its decision to suspend a student it found responsible for an alleged sexual assault — without notifying the man's accuser — when he appealed.

"Since this has come forward, there's been a lot of people on social media, and in meetings, who have spoken up, saying, 'Hey, this happened to me, I also left,'" said Addy Strickland, a student and activist at the Antigonish, N.S., university.

"So we know it's definitely a larger issue than the university has made it out to be."

The woman in this case, whose name is protected by a publication ban, left the university devastated after discovering her alleged assailant was still on campus.

The accused — who has been criminally charged in the alleged incident — withdrew from the school after the story went public, and on Friday, the president posted a public apology on the school website.

In a two-page letter to the campus community, MacDonald said, "I acknowledge and accept the fact that we can do better."

"In this particular case, there were clear gaps in communication and apparent issues relating to our appeal processes that negatively affected our university community and, in some cases, retraumatized victim/survivors," he said.

But the apology came as little comfort to St. F.X. student Kaitlin Dryden, who said this particular case is one of many, and the school is only acknowledging it because of the media attention it received.

She said the school has issued similar apologies in the past.

"The university constantly apologizes for their actions," she said. "But I don't think they understand their actions are ruining people's lives."

Dryden, who said she was sexually assaulted in her first year of university, said she has spoken to the administration three times before about sexual violence on campus and has received little response.

"I will never report my incident because I do not trust this school."

The online petition will make a number of demands, including that survivors must be informed and protected throughout the entire reporting process, that the school reconstruct its existing sexual violence policy to make it "survivor-centric," and that the school be more transparent and develop a communication plan for survivors and the campus community.

When asked for comment over the weekend, university spokeswoman Cindy MacKenzie said the school is working to advance its efforts to further develop and improve their sexual assault policies, and looks forward "to engaging the St. F.X. community."

"As mentioned in Friday's statement, we welcome input from our students as we work through this process. We will be inviting all comments and perspectives to help make our processes stronger," said MacKenzie in an email, adding that more details will be made available in the near future.

The protest was not addressed in a story posted on the school's website Saturday about the open house.

Chris Frazer, a history professor at St. F.X., said he was struck by the fact that the woman left the school after seeing her alleged rapist back on campus — but he said it's a situation that is all too familiar for him.

"The whole thing just felt wrong," he said. "I've been here for 14 years, and this happens consistently. And the only thing that's really different about this story is that it came out in the media."

He said he believes this speaks to a larger issue about the pervasiveness of sexual violence in Canadian universities.

"This is just the crest of a much bigger wave."

In the midst of this story, Strickland noted that there is help available for St. F.X. students who need it — the Antigonish Women's Resource Centre and the VISIBLE @ X website.

In a statement to The Canadian Press last week, the accused denied sexually assaulting the young woman, but said the "outrage" that has enveloped the university has caused too much stress for the St. F.X. community, and that he never intended to bring harm to the school.

He said he believed he did not have a fair and balanced process and said "the articles do not tell the whole story."

Court documents show he was charged with sexual assault and released on conditions. A preliminary inquiry is set for Nov. 29.

When a fundraiser shows us rape culture exists in Canada