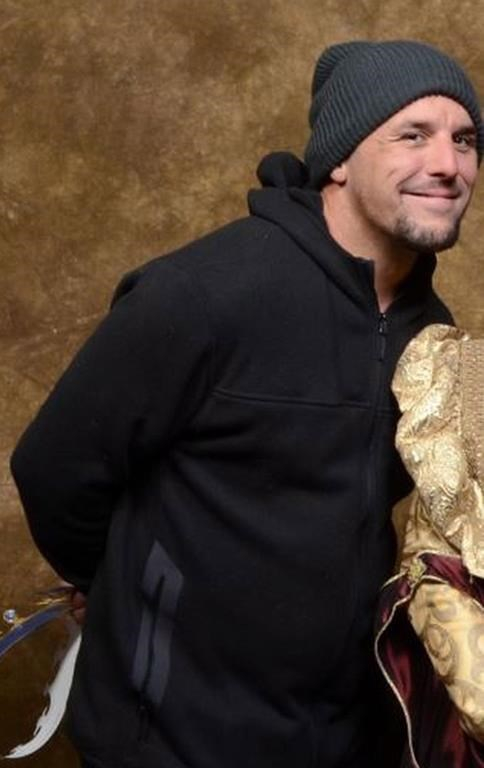 Police say a man who stunned patrons and staff at a popular Toronto aquarium when he stripped naked, hopped a security barrier and jumped into a large shark tank is wanted in connection with an earlier assault.

The man spent several minutes swimming in the tank with sand tiger sharks, sawfish and moray eels at Ripley's Aquarium of Canada, located beside Toronto's CN Tower, around 10:30 p.m. Friday as a crowd looked on.

Police say they are looking for David Weaver, 37, of Nelson, B.C., who is also wanted in connection with an alleged assault at another location earlier Friday evening that seriously injured a man.

At one point, according to officials and videos posted online, the man briefly paused his swim and appeared to be getting out at the urging of security guards. A moment later, he dove backwards into the tank as onlookers let out a cheer.

The aquarium said the man was with a woman when he entered and exited the facility, but left behind his jacket and T-shirt as he scrambled to leave before police officers arrived.

"It was premeditated and intentional," the aquarium's general manager Peter Doyle told The Canadian Press on Monday. "He wasn't here to enjoy jazz night because he was only here for 20 minutes."

The aquarium — which said it is "willing to press all appropriate charges" over the incident — said the incident took place during a bi-weekly event called Friday Night Jazz, which features live music and cash bars.

The facility's surveillance footage shows the man and a woman bought tickets to the event at 10 p.m. and made their way directly to the "dangerous lagoon," the 2.9 million-litre tank that is the centrepiece of the tourist attraction, Doyle said.

The man jumped into the pool at 10:26 p.m. and was out five minutes later, the general manager said.

At 10:31 p.m. on Friday night, Ripley's called police for an "indecent exposure incident."

"We arrived on scene within seven minutes and he was already gone," said Toronto police spokeswoman Katrina Arrogante.

Doyle said it's unclear if the man was intoxicated, and noted that he did not appear to have a drink at the aquarium.

Videos posted online show a bald man swimming in the tank as sharks and other fish pass underneath, with a security guard yelling at him to get out of the water. As he gets out of the tank, the videos show a woman in a leopard-print outfit handing him his clothes before he walks away.

"We've never had an incident like this before," Doyle said. "I've never seen this in my 25 years working in aquariums."

In the earlier incident, police allege a 34-year-old man was approached by an unknown man, who assaulted him and then fled the area.

Police say the victim sustained serious injuries and was treated in hospital.

They say Weaver is wanted for assault causing bodily harm and mischief related to interfering with property.

He is described as five feet 10 inches tall, weighing 220 pounds, with a heavy build, shaved head, goatee, and missing a front tooth. Police say he is believed to be driving a green Dodge Caravan with B.C. licence plate PL120G.