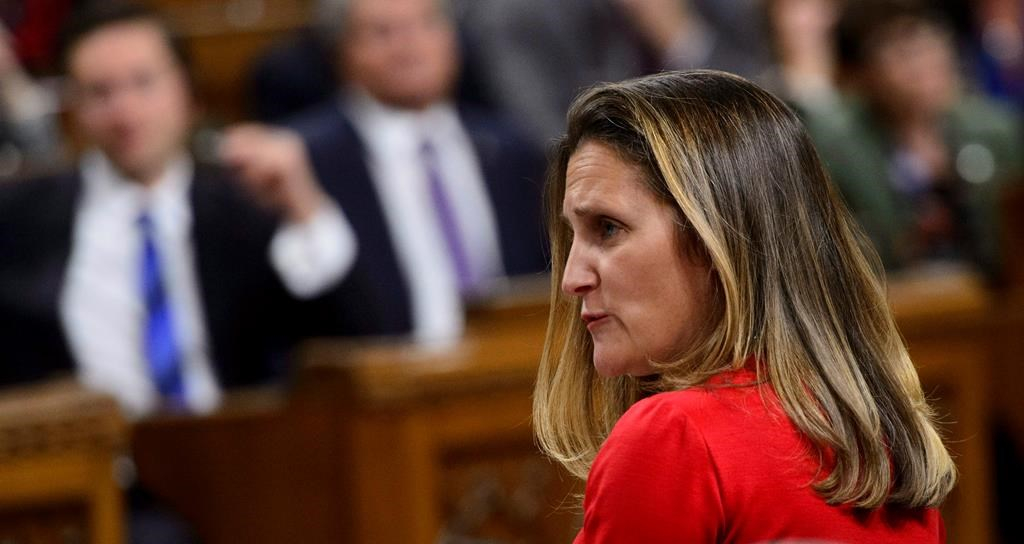 Minister of Foreign Affairs Chrystia Freeland stands during question period in the House of Commons on Parliament Hill in Ottawa on Monday, Oct. 15, 2018. Photo by The Canadian Press/Sean Kilpatrick
Previous story
Next story

"There are some very worrying questions about the disappearance of Jamal Khashoggi," Freeland said Tuesday during a question and answer session at the Fortune Global Forum in Toronto.

"Canada has raised the issue directly with Saudi Arabia and we are talking about the issue with our allies."

Khashoggi is a Saudi citizen and also a U.S. resident. He has written critically of the Saudi regime, and after entering that country's consulate in Istanbul two weeks ago, he hasn't been seen since.

Freeland said she's been in contact with her G7 and NATO counterparts, including U.S. Secretary of State Mike Pompeo, as well as the German, British and Turkish foreign ministers.

"We think that it is very important that there be a clear, transparent investigation. We need to know what has happened, and those responsible need to be held to account," Freeland said.

Her comments were echoed in a brief statement issued Tuesday by the foreign ministers of G7 countries.

"We, the G7 Foreign Ministers, of Canada, France, Germany, Italy, Japan, the United Kingdom, the United States of America, and the High Representative of the European Union, affirm our commitment to defending freedom of expression and protection of a free press," the statement said.

“We remain very troubled by the disappearance of prominent Saudi journalist Jamal Khashoggi. Those bearing responsibility for his disappearance must be held to account. We encourage Turkish-Saudi collaboration and look forward to the Kingdom of Saudi Arabia conducting a thorough, credible, transparent, and prompt investigation, as announced.”

There have been widespread reports that Khashoggi was killed inside the consulate by a Saudi hit squad that may have dismembered his body.

Trump offered his most robust defence of the Saudi regime during a Tuesday interview with the Associated Press in which he linked the allegations of the Khashoggi case with the recent Brett Kavanaugh affair.

In the interview, Trump compared the case of Khashoggi, who Turkish officials have said was murdered in the Saudis' Istanbul consulate, to the allegations of sexual assault levelled against Kavanaugh during his Supreme Court confirmation hearing.

"I think we have to find out what happened first," Trump told AP.

"Here we go again with, you know, you're guilty until proven innocent. I don't like that. We just went through that with Justice Kavanaugh and he was innocent all the way as far as I'm concerned."

Freeland, meanwhile, said Canada isn't backing down on defending human rights in its own dispute with Saudi Arabia.

In August, Saudi Arabia reacted strongly to a tweet from Freeland calling for the immediate release of detained activists, including Samar Badawi, a champion of women's rights and the sister of detained blogger Raif Badawi.

Saudi Arabia also responded by recalling its ambassador in Ottawa, freezing trade, cancelling flights to and from Toronto and recalling its students from Canadian medical schools.

Freeland said she's been in regular contact with her Saudi counterpart, but she had nothing new to report on Tuesday.

She said the Saudis are "very keen to have a dialogue" and that Canada wants human rights to be part of the conversation. She said that conversation would be conducted "politely" and with "humility."

But she also dropped a strong hint that she has no regrets about the very public tweet that raised the ire of Saudi rulers.

"And sometimes it's important to take a public stand."