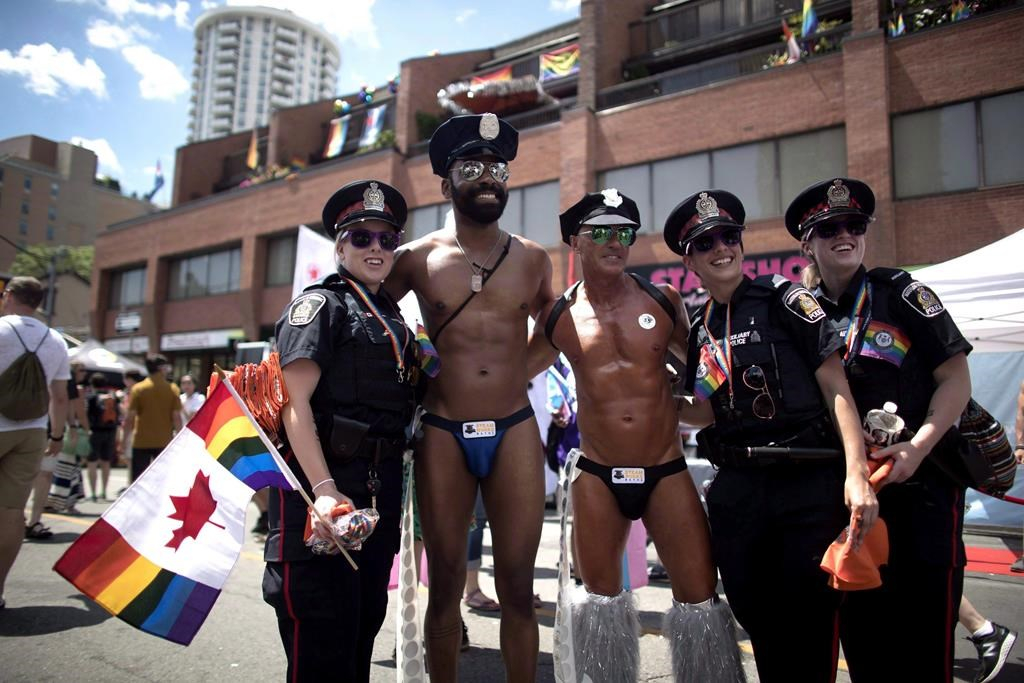 Revellers pose for a photos with police officers at the annual Pride Parade in Toronto on Sunday, July 3, 2016. File photo by The Canadian Press/Mark Blinch
Previous story

Toronto's Pride Parade has lifted a ban on uniformed police officers participating in the colourful annual event, saying the force was welcome to apply to be a part of next summer's festivities.

The relationship between Pride Toronto and city police has been tense for the past two years — uniformed officers were banned from the parade in 2017 over concerns of racial profiling, and again this year over criticism the force had not taken the disappearances of several men missing from the city's gay village seriously.

Pride Toronto said Tuesday the two sides have made progress on conversations related to "policing and institutional power" and said that if police apply to march in the 2019 parade, their request will be granted providing they meet the event's rules.

"We're looking for real solutions to some of these issues and what we're not going to do is not sit around the table and not talk to one another in order to arrive at those solutions together," said Olivia Nuamah, the executive director of Pride Toronto.

Toronto Police Chief Mark Saunders said the relationship between police and the LGBTQ community had been strained for a time, and being able to march in the Pride Parade meant a lot to the force.

"We needed to figure out how to move forward. We're not going to get policing proper unless we establish relationships," he said. "This is just a start to a much longer journey. We're not where we need to be yet but as chief I promise you the Toronto police service will do anything and everything we can to get to where we need to be."

Tensions involving police and the parade broke out in 2016 when members of Black Lives Matter abruptly halted the march to present several demands, among them that uniformed police, their floats and cruisers be excluded.

The group cited tensions between the force and black citizens arising from racial profiling as among the reasons for their demands.

Pride organizers agreed for the next two years to exclude uniformed officers on-duty from marching in the parade.

For this summer's parade, organizers also cited ongoing anger about perceived police inaction on a slate of disappearances from Toronto's gay village as a reason police could not participate.

The community had long ago sounded the alarm on a suspected serial killer preying on men in the gay village. Saunders himself said there was no serial killer last December, even though recently released court documents showed investigators had zeroed in on McArthur as the key suspect in the disappearances of five men.

"Certainly what Bruce McArthur did was raise a number of issues that police have taken up themselves," Nuamah said. "What I can say is as a result of that we have all undertaken to find solutions to some of the issues raised by Bruce McArthur."

Nuamah also noted that Black Lives Matter played no role in the reconciliation talks with police.

Pride Toronto acknowledged that Tuesday's decision to invite police back to the festivities would be controversial.

"For many members of our communities, this decision will feel premature; we may not all see the same signs of a mending relationship," the organization said in an open letter to the LGBTQ community.

"Indeed, some of the change is subtle and some just getting underway. We are heartened that the seeds are being planted, but we acknowledge and respect those who will find this decision a difficult one."

Toronto Mayor John Tory said the building up of trust between the police and the LGBTQ community was well underway.

Toronto's Pride parade is one of the country's most colourful and flamboyant outdoor events. This summer's event saw more than 120 groups march through a part of the city's downtown, with crowds of onlookers cheering them on.