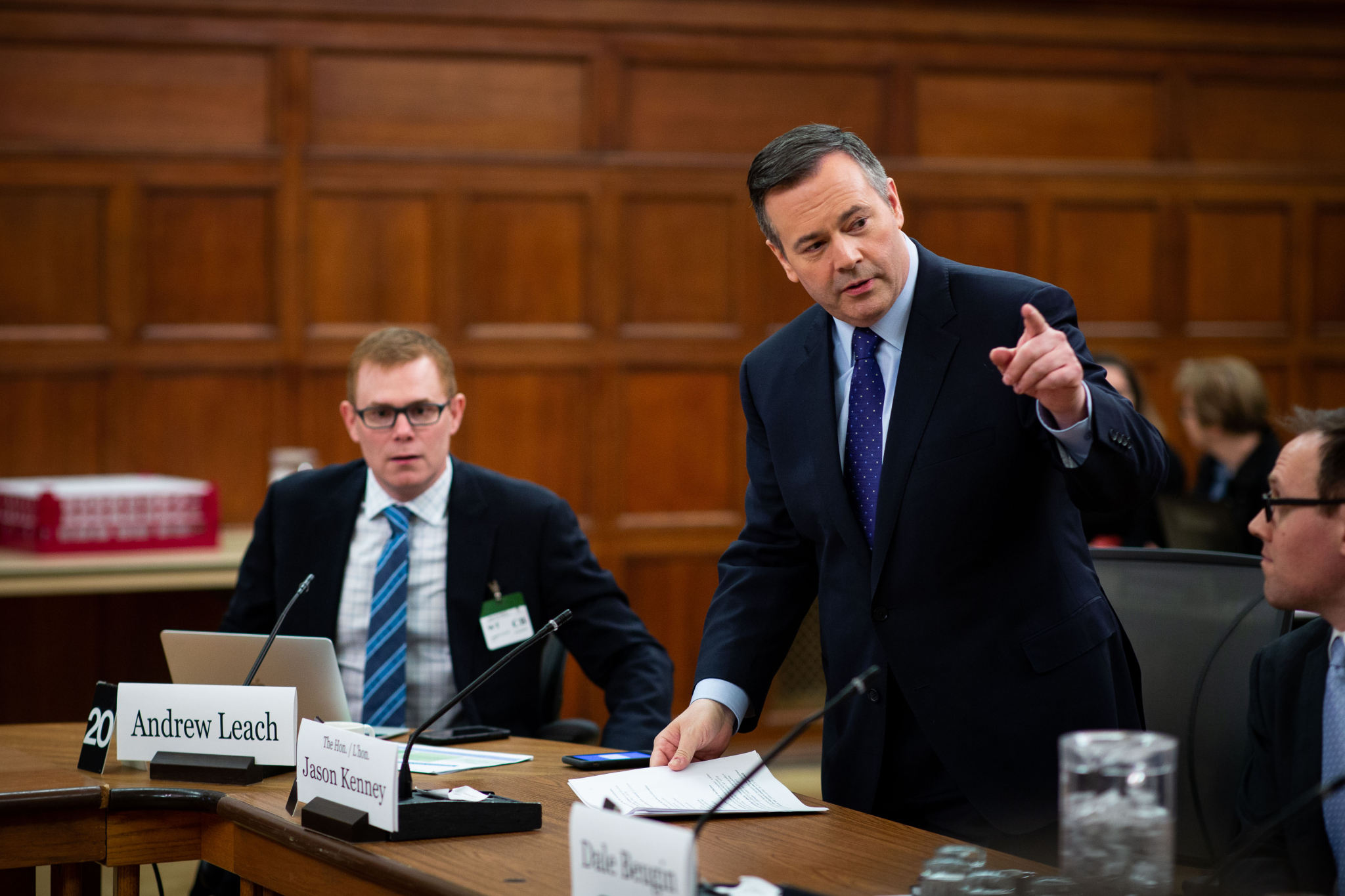 Alberta United Conservative Leader Jason Kenney gestures as he takes his place at a parliamentary committee studying carbon pricing in Ottawa, next to economists Andrew Leach (left) and Dale Beugin (right) on May 7, 2018. File photo by Alex Tétreault
Previous story
Next story

“Economists say a carbon tax is the most efficient way to reduce greenhouse gas emissions.”

How many times have you heard this phrase? Ten? Fifty? Over 100 times? For more than a decade, nearly every piece of climate change punditry has perpetuated this gospel truth of carbon taxes.

Whatever the reason, enough of us don’t like them that swiping “no” to the federal carbon tax is quickly becoming a Tinder app for politicians interested in forming new bro-mances.

Who would sell Dion’s carbon tax?

How is it that such an unpopular policy has become the mainstay of our climate change conversation for so long?

To answer that question, flash back more than a decade. Successive Liberal governments, along with the Harper Conservative government in its first term, had crafted climate change plans with broad public acceptance. Policies included a cap-and-trade system for industry plus a range of regulations and other targeted programs. Importantly, consumers were exempted from any obligations and were instead offered various subsidies to go green.

Then Stephane Dion woke up one morning and decided his knack for expressive clarity wasn’t enough to lead the Liberals to victory in the 2008 federal election. He needed to be different. Really different. So, Mr. Dion jettisoned the climate change policy consensus and proposed a carbon tax in its place.

But who would help Mr. Dion sell his proposed ‘Green Shift’ to Canadians? Enter the economists. Bored with teaching the dismal science to millennials, academic economists were looking for a new challenge, a chance to be the yeomen of efficiency in the battle to save planet Earth. So, they joined Mr. Dion’s carbon tax sales force in droves. Microsoft Excel became the new weapon of choice in the war against climate change.

Canadian voters roundly rejected Mr. Dion’s carbon tax, leading the Liberals to their second-worst showing in a federal election since 1867.

Sadly, the economists couldn’t take a hint. “How could the public reject our tax?” they asked themselves with incredulity. All that they needed to do was to continue the mission of carbon tax proselytization and eventually voters would come onside. So, they took to social media, print and television, and participated in panels, commissions, and institutes - anyplace where they could preach the mantra of carbon tax efficiency.

‘We are no farther ahead’

Flash forward to today: after 10 years of debating a carbon tax it seems that we are no father ahead. In fact, looking at the tenor of the political circus around the carbon tax, we seem father behind. Lost in the last decade’s preoccupation with a carbon tax was any discussion of other more publicly acceptable (albeit less efficient) climate change policies. Perfection has proven to be the enemy of the good.

Canadians now have an important question to ask themselves: At what point do we decide that a carbon tax is too politically toxic to pursue further and start talking about alternatives?

It will be messy. It will be inefficient. It may not completely save us from climate change Armageddon. But it will certainly be better than arguing about a carbon tax for another decade.

By Steve Lambert | News, Politics | October 12th 2018
Reports from the Race to a Safer World

Interesting take, to be sure.

Interesting take, to be sure. It would interesting, too, if those politicians who are advocating against carbon pricing and people who don't want to pay a price on carbon would tell us what their proposals are for effectively addressing climate breakdown. I ask because the anti-carbon price crowd seems just as opposed to any measures that would effectively reduce CO2 emissions, except those that involve new technological breakthroughs which have an almost zero chance of magically appearing anytime soon.

I often wonder what the

I often wonder what the public conversation around this would have been if the Government would have, in late 2015, passed a bill introducing a national carbon tax and dividend program, rather than spend two years on a pan-Canadian framework. Canadians would have received three carbon cheques by the time they went to the polls next year, and they'd have three years of data to (possibly) illustrate how it had already driven emissions down to a degree and been successful at achieving the objective. After three years of lived experience, it'd be harder for opposition to claim it was "just another tax". The accusation then would be more about wealth re-distribution, which would present an opportunity for a more conventional response. All that being said, the $20-$50/tonne is nowhere near what the World Bank ($150US/T) and the IPCC ($5500US/T) say is necessary to change purchasing decisions.

Totally agree with each of

Totally agree with each of your points Graeme. The attempt to work with provinces was probably in reaction to the Harper government legacy of ignoring them. I wonder what the anti-tax folks will say when we start running out of disaster relief money in a decades' time? Many they'll point at how high the GDP is because of all of the work recovering from hurricanes, droughts, wild fires, tornadoes, insects migrations, permafrost loss and building sea walls?

I don't think it would matter

I don't think it would matter much, frankly. Oh, it might have helped a bit. But the real oxes getting gored aren't ordinary citizens, and carbon taxes get tons of negative publicity for the exact same reason that for years there was supposedly a "debate" about climate change even though the scientific consensus was overwhelming: Oil, coal etc. money wanted us to ignore reality.

It doesn't matter what method

It doesn't matter what method we use. The ideas of carbon taxes and cap-and-trade were originally introduced because industry whined about regulation and wanted "market-driven" solutions. Now industry is whining about carbon taxes and industry-backed politicians with names like Ford are abolishing cap-and-trade systems even though cap-and-trade is the most ludicrous industry-gimme approach to climate mitigation EVER.
If we come up with something else, they'll pseudo-back it against carbon taxes just until it gains enough momentum that someone might want to actually do it, and then they'll turn around and start whining until useful fools start saying "Well, industry doesn't like this one, maybe we should give up and try something else".
But OK, they hate carbon taxes, here's an alternative: Expropriate the fossil fuel industry without compensation, take all the executives' money, and their little Barbados trust fund too, as back taxes owed, and start shutting 'em down. Maybe once we take their cash they won't be able to distort the country's politics so much.

Mr. Trudeau is encouraging ever more fossil fuel extraction and marketing around the world. Our government should be held accountable for the ever increasing carbon footprint. When Trudeau promised to wean Canada off of fossil fuels how many voters knew he was going to ramp up the oil and gas industry? I hope he's not banking on those voters coming back to him in October 2019.

The prospect of another

The prospect of another decade arguing over climate action is disheartening. The prospect of our future is disheartening, period! But even if we are failing in many ways, I'm still so grateful to Citizens Climate Lobby, which works as if our lives depended on it, for fee & dividend carbon pricing (recommended by Graeme in comments here) and Elizabeth May & Greens/greens everywhere for doing what we can. Time to cut the power to the earth destroying, future destroying clique for sure.