Breaching dams to save Northwest orcas is contentious issue 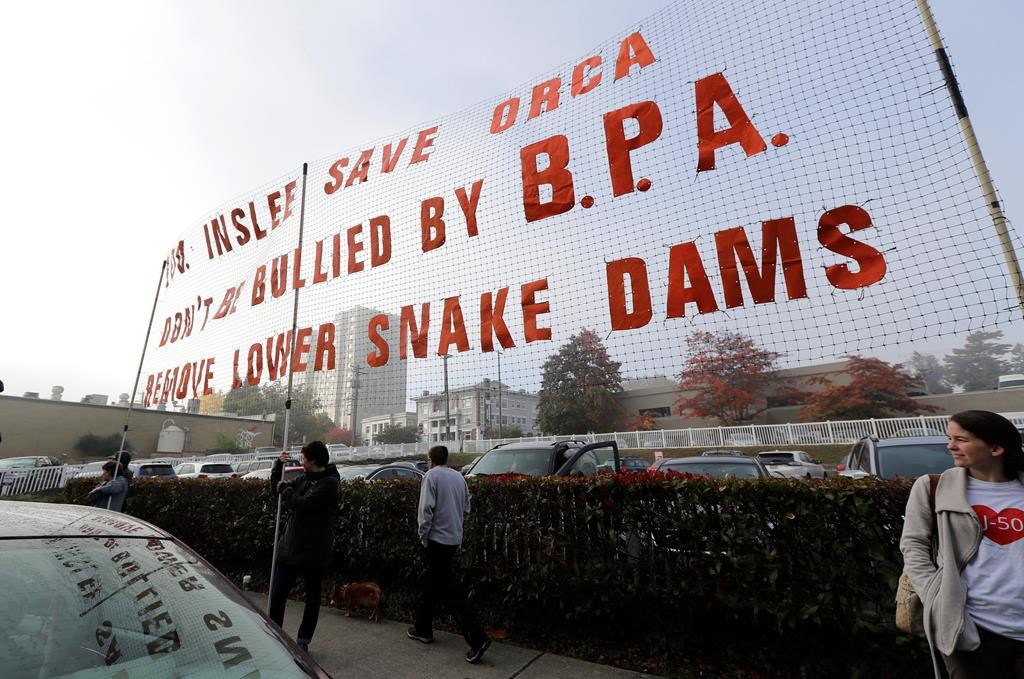 In this Oct. 17, 2018 photo, supporters of dam removals and other measures intended to help endangered orca whales stand near a large sign a outside a building in Tacoma, Wash. Photo by The Associated Press/Ted S. Warren
Previous story
Next story

Some argue the quickest way to get more salmon to the starving whales is to tear down four dams on the Lower Snake River, a tributary of the Columbia River, to help migrating fish.

But federal agencies and others have pushed back, saying the dams provide benefits to the region in low-cost hydropower, navigation and recreation.

Breaching the dams has long been contentious, but it's gained renewed attention as the orcas have hit the lowest numbers in more than three decades. The whales struggle from pollution, boat noise and lack of chinook salmon, which have been declining because of dams, habitat loss and overfishing. Just 74 animals remain in the small group.

A task force called by Gov. Jay Inslee is prioritizing a list of potential solutions to address those three threats. At a meeting Thursday, there was little consensus on whether the group should convene stakeholders to discuss issues related to the possible future removal of the dams.

Ken Balcomb, a scientist with the Center for Whale Research, who supports dam breaching, told the group that punting on the issue won't help the orcas. "They're reaching the bottom of their barrel," he said. "We have to move the ball forward. The time is now."

A number of whale and fisheries scientists have urged the task force to recommend breaching the dams and spilling more water over Columbia and Snake river dams to help salmon. Many who have commented have also supported the idea.

But dam supporters say the structures provide carbon-free electricity and support barging on the Snake River that moves millions of tons of cargo.

"The dams along that river are the lifeblood of those communities," Tom Davis, government relations director with the Washington Farm Bureau. He called the talk over dams "a distraction" that continues to divide the state.

Some say dam removal could be part of a long-term solution but note that more immediate actions could boost salmon, such as removing smaller dams or increasing habitat protections.

"Everything has to be on the table," said state Sen. Kevin Ranker, an Orcas Island Democrat who supports dam removal but said discussions would need to take place. Meanwhile, he said the state can move quickly on other actions, including creating a "no-go zone" that restricts vessels around feeding whales.

Other ideas being weighed by the group include reducing boat noise around the orcas; creating a permit system for commercial whale watching trips; protecting habitat for chinook salmon and the smaller forage fish that they eat; boosting production of hatchery fish; and spilling more water over Columbia and Snake river dams.

"There is no one magic solution to recovery of southern resident killer whales," said Rob Williams, a Pew Fellow in marine conservation and co-founder of Oceans Initiative. "The three main threats that the whales are facing are inextricably linked, so recovery actions need to be linked too."

Federal agencies are currently studying dam breaching as one of many options to aid salmon recovery in the Columbia River basin after a federal judge in 2016 ordered a new plan and told the federal government to consider breaching one or more of the four lower Snake River dams. That environmental review won't be complete until 2021.

Officials with the Army Corps of Engineers, which operates the four dams, and Bonneville Power Administration, which markets the power, said the structures provide low-cost electricity and adds reliability to the entire system.

The dams produce an average of 1,000 megawatts of power a year, or about 5 per cent of electricity generated in the Pacific Northwest, and account for about 12 per cent of BPA's power.

A number of conservation, fishing and other groups say removing the dams represents the greatest opportunity to boost salmon runs and that planning must begin now. They note that the two Snake River runs are among 15 priority stocks of chinook salmon for orcas, and that increasing those runs would be a big step forward.

Michael Milstein, a spokesman with NOAA Fisheries, said those Snake River runs are important but not in isolation. The whales "depend on a number of stocks up and down the West Coast over the course of the year and they're all important," he said, adding that returns to the Snake and Columbia rivers have been up in the last 10 years. "We do think that the whales have access to the same volume of fish that they would have otherwise," he said.

Jeff Friedman, U.S. president of the Pacific Whale Watch Association, said "the dams are not everything but it's a big piece."

He said there are interests in eastern Washington that would need to be addressed but that "it's time we have that conversation to find out what it is going to take for everybody."

By Associated Press | News, US News, Politics | November 22nd 2017
State Of The Animal