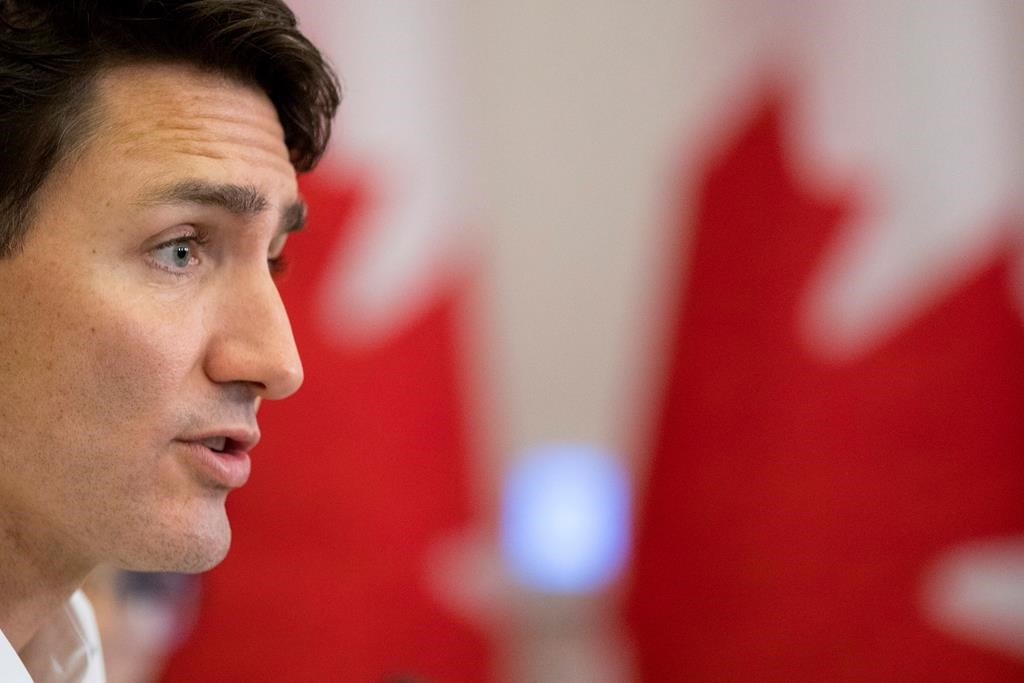 Prime Minister Justin Trudeau attends a meeting of the Youth Council in Toronto on Friday, October 19, 2018. Photo by The Canadian Press/Chris Young
Previous story
Next story

The controversy surrounding Canada's $15-billion deal to sell armoured vehicles to Saudi Arabia got deeper on Tuesday, as Prime Minister Justin Trudeau revealed that taxpayers would pay "significant financial penalties" if the contract was cancelled.

The comment came as the federal government faced new calls to scrap the agreement, billed as the largest arms deal in Canadian history, because of the killing of Saudi journalist Jamal Khashoggi.

The Saudi government has denied murdering Khashoggi in Turkey earlier this month, but Canada and other countries say Riyadh's explanation lacks credibility and called for a detailed investigation.

Trudeau echoed those doubts during a news conference in Toronto on Tuesday, saying "the brutal murder of a journalist on foreign soil is something that is extremely preoccupying to Canadians, to Canada and to many of our allies around the world."

Yet the prime minister, whose government was already locked in a diplomatic spat with Saudi Arabia even before Khashoggi's death, indicated the federal government was reluctant to cancel the arms deal because Canadians would end up bearing up the brunt of the cost.

"One of the issues we are faced with is a contract that was signed by the previous government that makes it extremely difficult for us to withdraw from that contract without significant financial penalties on Canadians," Trudeau said in response to a reporter's question.

"We are working very hard and looking at our options, because as we said, this situation, if indeed the stories that are widely being reported turn out to the case, then Canadians expect us to act."

The prime minister did not put a price tag on the potential penalties during the news conference to announce more details of his government's federal carbon tax, but suggested earlier in the day that it would be $1 billion or more.

It also wasn't immediately clear who would actually receive the money: Saudi Arabia or General Dynamics Land Systems, whose plant in London, Ont., is building the light-armoured vehicles, or LAVs.

The Prime Minister's Office referred questions to Global Affairs Canada, where a spokesman for Foreign Affairs Minister Chrystia Freeland declined to comment because of commercial confidentiality.

Opposition parties have been calling on the government to take a firm stand on Saudi Arabia, though they have been divided on the best approach. While the NDP wants to the arms deal cancelled, Conservative leader Andrew Scheer sidestepped questions Tuesday about scrapping the contract and instead urged the government to wean Canada off Saudi oil imports.

Human-rights groups and others critical of the deal renewed their calls for the government to pull back the curtain on the agreement, which has remained largely shrouded in secrecy since it was signed by the Harper Conservatives in 2014 and subsequently upheld by the Trudeau Liberals.

However, Trudeau indicated in an interview with the CBC on Tuesday morning that the terms of the "difficult" contract prevented the government from speaking at length about the deal, which was facilitated by the Canadian Commercial Corporation.

The corporation also negotiated a secret deal to sell military helicopters to the Philippines last year, which was later scuttled over concerns the aircraft could be used to commit human-rights violations.

University of Montreal law professor Daniel Turp, who is trying to challenge the Saudi deal in court on the basis that it violates Canada's human-rights obligations, said there was "something very unhealthy that this is a Crown corporation that is hiding information from the public."

The reported presence of financial penalties for cancelling the deal was also seen as confirmation of longstanding suspicions that the government had put commercial interests ahead of human rights when it came to the contract — and set a troubling precedent.

"Ottawa's logic that Canada is contractually bound by the agreement constitutes a troubling slippery slope and sends a clear message to Saudi Arabia that it can get away with virtually any behaviour — however gruesome and criminal — and still count on a constant flow of Canadian arms," said Cesar Jaramillo, executive director of Project Ploughshares.

Alex Neve, secretary general of Amnesty International Canada, said the prime minister's revelation underscores the importance of considering human-rights before approving the sale of arms to countries like Saudi Arabia.

"When human rights considerations are given short shrift at the outset in approving arms deals with countries that have notorious human rights records," he said, "the implications are not only the very real risk of contributing to the commission of war crimes and other serious rights violations, but also that it may cost a great deal of money to make things right later on."

I agree with Amnesty on this

I agree with Amnesty on this one. Selling arms to people like the Saudi Arabians is always going to bite us back. Sure, breaking a contract usually has cancellation costs, but it seems to me that the Saudis have repeatedly threatened to break the deal themselves, so upping the rhetoric would result in the Saudis carrying out their threat and we could charge them for breaking the deal. Why are our politicians always such wussies about stuff like this?