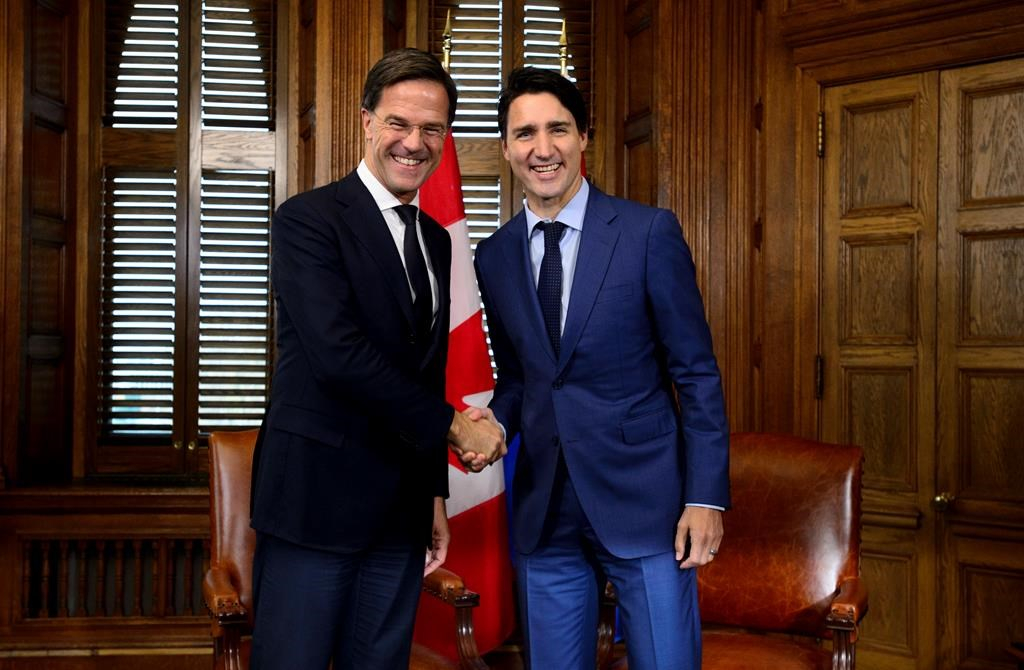 Dutch Prime Minister Mark Rutte and Prime Minister Justin Trudeau expressed shared concern Thursday over the current fate of the international order that both their countries help to create after the carnage of the Second World War.

The theme developed over Rutte's one-day visit and was laid plain in his morning speech to Parliament where he said Canada and the Netherlands have a special role to play after Brexit.

Rutte told the House of Commons that Britain's decision to leave the European Union is a terrible idea, adding that he imagines many Canadians feel the same. In his address he also invoked the strong bonds between the two countries forged during the Second World War.

"In Europe, we now face the great unknown of Brexit. Let me be totally honest, I still think it's a terrible idea," Rutte said in his speech, as Trudeau looked on.

Rutte said that Brexit negotiations are proving complex because "it's not so easy to unbreak the eggs that made the omelette."

Rutte said his country needs to continue working with the United Kingdom and that it remains a key partner for the Netherlands, and for Canada.

"Together with Canada I'm sure we will succeed in building new and even stronger bridges between both sides of the Atlantic," he said, adding that he discussed the issue with Trudeau during their private meeting.

Trudeau told Parliament that the bond between Canada and the Netherlands has been "tested and solidified on the battle field." He said the countries share a strong sense of duty and a commitment to fairness.

"It's brought us together in defence of shared goals and ambitions and it will propel us to a new prosperity in the decades ahead."

Rutte praised the Comprehensive Economic Trade Agreement, or CETA, saying the wide-ranging free trade deal between the EU and Canada is a progressive, modern agreement made for the 21st century. He said it shows that trade does not have to be a "zero sum game."

The Dutch leader said his country and Canada helped build the international rules-based order that rose from the "ruins" of the Second World War, including NATO, the United Nations and the World Trade Organization.

He said the two countries share a commitment to free and fair trade, and the ongoing effort to make global institutions more relevant to people around the world feeling the ill effects of globalization. Rutte said "geopolitical shifts" need to be addressed.

"In the past we worked to build a better world order and it's true after so many years the system we built is now showing some cracks."

Rutte didn't mention Donald Trump by name, but his remarks appeared aimed at the U.S. President who has taken a rhetorical wrecking ball to international institutions.

But Rutte said that the U.S. can't be blamed for asking other NATO countries to increase their defence spending — a case Trump has made loudly in the past.

Trudeau was asked by a Dutch journalist if he had advice for Europeans on dealing with Trump.

"Trade deals are not zero sum games," Trudeau replied. "As we have seen with CETA, as we've seen time and time again with trade deals around the world, it is obvious that trade deals properly done can be win-wins for all participants."

Trudeau also told reporters that countries like Canada and the Netherlands need to stand up for "democracy, human rights and the rule of law at a time when these institutions are facing growing uncertainty."

Trudeau said in addition to Canada's defence efforts and peacekeeping missions it will work to build a more peaceful and prosperous world, "a world where the rights and liberties of every citizen are upheld and protected."

Rutte thanked Canadian soldiers for their efforts in liberating the Netherlands during the Second World War, including the more than 7,600 young men who did not survive.

"They made ultimate sacrifice and Netherlands is their final resting place."

The two leaders concluded their day with a town hall event at Gloucester High School where they took questions from students about legalizing marijuana, ensuring safe drinking water in First Nations communities, addressing mental health support in the work place, and how to encourage more women to enrol in science technology, engineering and math.

It has taken all the years

It has taken all the years since WWII for Britons to face up to the facts of the changing world order. Not even their "green and pleasant" island can withstand the forces of globalism, of technology and of the aspirations of their former colonial subjects. The Empire for centuries shielded the kingdom from the realities of its precarious existence. As the Empire faded, the EU and the supports it provided bolstered and rescued the ruined economies left as legacies of that pyrrhic victory over fascism and partial victory over communism.

However, what ultimately will kill Britain is its fear. The tattered remnants of its white supremacist ruling classes and the "commons" who follow their lead, have evidently decided to go down squalling at the prospect of being overwhelmed by the immigrants, formerly despised colonial subjects, now flooding through their gates. They are not alone. All of the "white" European countries are grappling with the same fear and revulsion. Perhaps finally they begin to understand the feelings of those they colonized - and sometimes tried to exterminate.