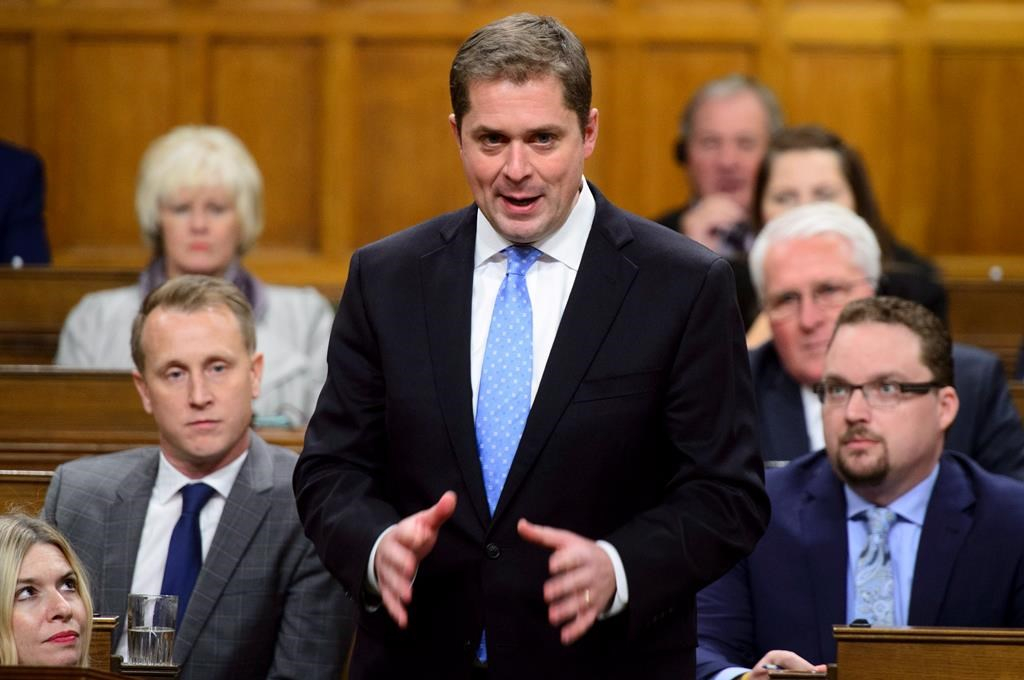 Conservative Leader Andrew Scheer stands during question period in the House of Commons on Parliament Hill in Ottawa on Wednesday, Oct. 24, 2018. Photo by The Canadian Press/Sean Kilpatrick
Previous story
Next story

The federal Opposition leader is likening the stalled Trans Mountain pipeline expansion to a famous Monty Python sketch in which two men argue over whether a parrot is actually dead.

"(Prime Minister) Justin Trudeau has bought a pipeline with no plan to actually build it. Conservatives will build pipelines without having to buy them," Conservative Leader Andrew Scheer told the Energy Relaunch conference in Calgary on Thursday.

"It's a little bit like the Monty Python dead parrot sketch. He just wants everyone to believe that it's not quite gone yet."

The Liberal government purchased the existing Trans Mountain pipeline from Kinder Morgan earlier this year for $4.5 billion after the U.S. firm became frustrated by political roadblocks, mainly put up by the British Columbia government.

An expansion to nearly triple capacity on the line stretching from Alberta to the B.C. coast is in limbo following a Federal Court of Appeal ruling in August that requires more Indigenous consultation and research into increased tanker traffic.

Scheer said if he were to become prime minister, he would repeal the carbon tax and Bill C-69 to overhaul energy project reviews. He called the proposed legislation the worst thing to happen to the industry since Pierre Trudeau's national energy program of the 1980s.

Both Scheer and his provincial counterpart — United Conservative Leader Jason Kenney — highlighted what they see as the need to go on the offensive against foes of Alberta energy development.

Scheer said nothing frustrates him more than protesters from elsewhere trying to block exports of Canada's "safe and responsible and secure" energy.

"And yet I don't see them lining up and down the St. Lawrence (River) trying to block tanker after tanker of foreign oil coming into our markets from countries with terrible human rights records, without anywhere near the same level of environmental standards that we have in this country."

Earlier in the day, Kenney reiterated his multi-pronged plan to fight back against Alberta energy critics if he becomes premier after the spring election.

It would include setting up a war room within the Alberta Energy Department to counter anti-oilsands claims quickly, paying the legal bills of pro-development Indigenous communities and targeting charitable groups that want to shut down the industry.

"It is time that we used all of the political and economic levers at our disposal," Kenney said.

Canada should stick up for its industry and can't cede the global energy market to the likes of Saudi Arabia, Iran and Venezuela, he said.

"Either we allow them to dominate global energy markets or ... we move forward on the offensive unapologetically to do everything possible to get our Canadian energy to global markets."

Deron Bilous, economic development minister in Alberta's NDP government, said it's one thing on which he and the Opposition agree.

"From the Alberta point of view, it's quite frustrating when other provinces across this country are importing their resources from either petro-dictatorships or countries that have low to no standards whatsoever, when we have real opportunities to supply our own country with our energy."

Nothing frustrates me more

Nothing frustrates me more than the PCs and their puppet masters' refusals to acknowledge, publically, that the Tar Sands are a doomed enterprise, economically and environmentally un-viable. The KM pipeline was predicated on faulty, if not wilfuly false, data from the start; as it's former ENRON proponents were merely running another stock scam to wring as much revenue as possible from investors and pipeline proponents while they failed to meet targets, deadlines or the laughably lax conditions laid on them by their friends at the NEB.

I can't begin to grasp the calculations that drove the Federal government to puchase this broken and useless "asset". Only time will unravel this fiasco.

OK, first, on the Parrot

OK, first, on the Parrot Sketch thing, this is the first time I've ever seen Scheer say ANYTHING and thought, "He might be right. Actually, I hope he is."
For the rest, what utter liars. The gall of a guy who backs to the hilt companies with no interest in refining any of our oil/tar/other ugly stuff in Canada, who is backing pipelines explicitly intended only to export unrefined muck to other places while we continue to import refined gas from the Saudis, then turning around and talking like opposition to pipelines == support of Saudi imports. He is scum, and the Alberta NDP are worthless sellouts.
If he wanted to see Saudi oil replaced in Canada, which he doesn't, he would back a federal project to create refineries for the Alberta muck so that rather than sticking it in pipelines we could refine it into somewhat less toxic stuff and use it in Canada.
Of course, the RIGHT policy is to back federal and provincial projects to ramp up renewable energy and electric transportation including plenty of mass transit. Then we'd no longer need Saudi oil and gas because we wouldn't need oil and gas at all.

scheer and kenney the blind