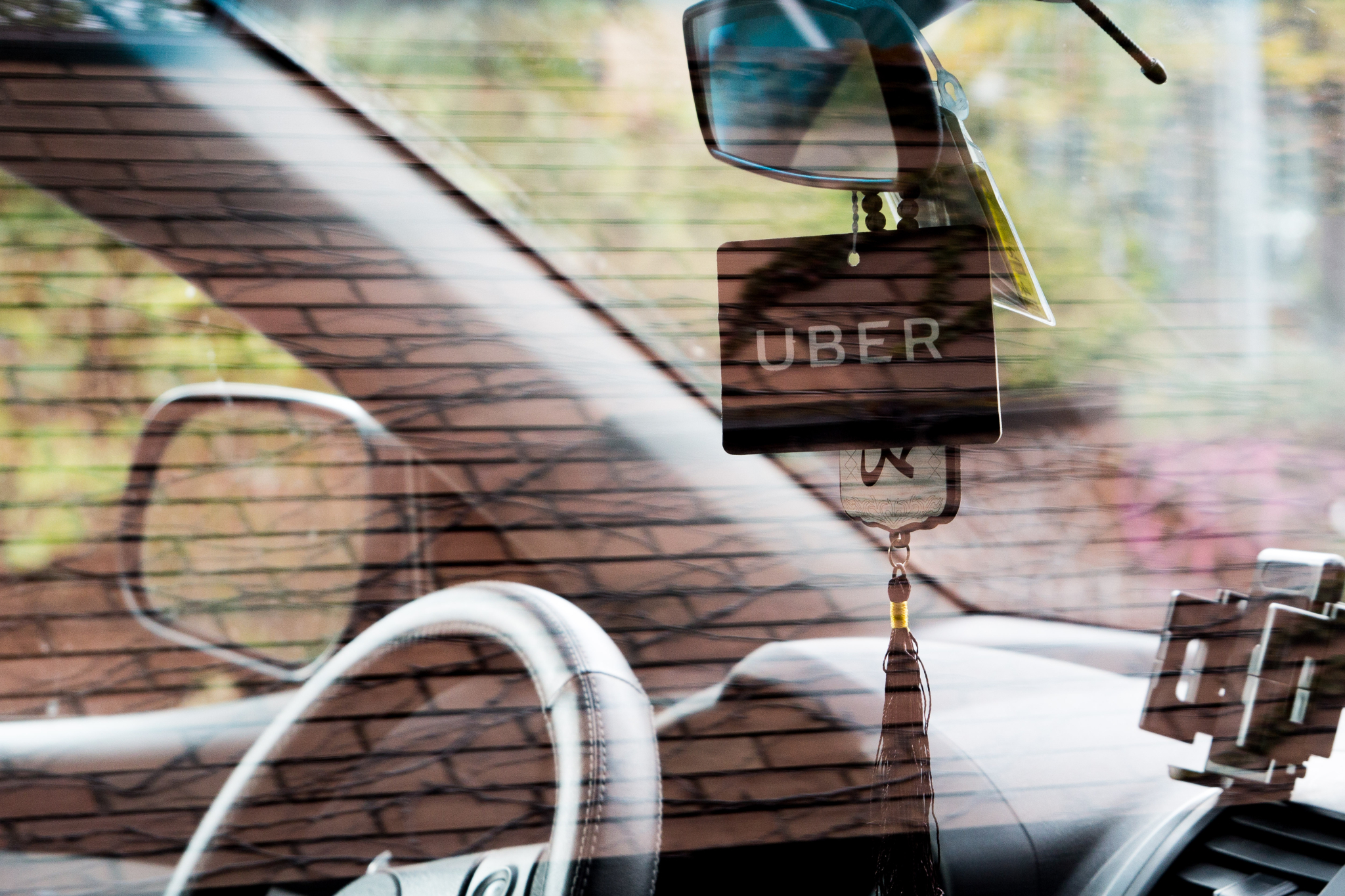 An Uber car in Montreal on Oct. 31, 2017. Photo by Josie Desmarais
Previous story
Next story

Émile Hajjar has worked as a taxi driver in Montreal for 18 years and hoped to sell his taxi permit – which he purchased for $60,000 – in order to retire five years from now.

He’s unsure whether retiring at 65 will be possible anymore. Taxi permits in Quebec, once highly sought after given their limited number, have significantly dropped in price and are not in demand. On Thursday, several month-old listings for permits priced around $100,000 were listed on Kijiji, the online marketplace.

“The problem is that we are stuck with the licenses that we have. I can't sell it, and I’m not going to throw it [away]. It’s too much money,” Hajjar, who works for Taxi Champlain, told National Observer on Wednesday. “If I want to do something else, I have to sell my permit. But nobody buys them now.”

A taxi permit used to be a hot ticket for new immigrants hoping to set up a business fast in their new country, according to Hajjar. In recent years, taxi customers have flocked to Uber, enticed by cheaper rates.

In bad news for Hajjar and traditional taxis across the province, Quebec’s transport ministry announced a second one-year extension of a 'pilot project' allowing Uber to operate in Quebec. It published a ministerial decree Oct. 12. The ministry said during the year, it will collect and analyze additional information on Uber services and their impact on the taxi industry.

After two years operating in the province without paying federal or provincial taxes, Uber started operating legally in Quebec in Oct. 2016. A one-year pilot project was extended by another year in Oct. 2017, with some conditions added, including more hours of driver training, mandatory vehicle checks, and mandatory police background checks. Uber drivers do not need to purchase taxi permits.

This is the final year Uber can operate under a pilot project in Quebec because the provincial taxi transportation services act sets a limit of three years, including an extension.

The outgoing Liberal government extended the pilot project in its final cabinet meeting at the behest of the incoming Coalition Avenir Québec (CAQ) government, according to a report in French daily newspaper La Presse.

The CAQ, which was elected on Oct. 1 and assumed office last week, championed Uber on the election campaign trail and in debates in the National Assembly.

Ewan Suaves, press attaché for the cabinet, said that no information about the government’s plans for Uber once the pilot project expires or about modernization of the traditional taxi industry is available. But the election of François Bonnardel as transport minister last week bodes well for Uber.

In the National Assembly last year, Bonnardel supported Uber’s continued presence and argued a year ago that the Liberals should acquiesce to Uber’s demand to drop a requirement of 35-hour driver training in the second year of the pilot project. “A collaborative economy can work in Quebec, but the government wants to deprive Quebec from those benefits for a 35-hour training that is in place nowhere else in the world,” he said.

Ultimately, the requirement was kept. Uber drivers must complete a 35-hour online training course. Traditional taxi drivers do 150 hours of training in school at a cost of $1200 to work on the island of Montreal.

In an email to National Observer, Suaves wrote that the CAQ election promises to modernize the taxi industry and encourage competition "were clear and we will respect them."

Hajjir received $46,700 on the eve of the provincial election, his part of a $250 million compensation package allocated to taxi drivers in this year's government budget for the loss of value to their permits. He welcomed the cash and admitted it goes a lot further for him than colleagues who bought permits when they were at their most expensive four of five years ago. But he said compensation alone does not fix the problem.

“We don’t need money, we need business,” he said, adding that he feels that it is the government’s responsibility to help the traditional taxi industry regain their competitive edge “They should have one rule for everyone. Not two rules, two systems.”

Hajjar used to drive four or five times from downtown Montreal to the airport daily, but now he’s lucky if he gets one or two trips. He said that is he is thankful that he does not have a family to support. He said his colleagues with families “work seven days a week, they work non-stop from 7:00 am to 7:00 pm, just to pay what they have to pay.”

Currently, there is no cap on the number of people allowed to drive for Uber on Quebec roads. In September, 2017, Uber estimated it had 10,000 drivers in Quebec.

Meanwhile, the province estimates that there are 7,600 taxi permits in Quebec. The permit system was introduced to control the number of taxis in the province.

George Boussios, spokesperson for Taxis du Grand Montreal, a group that represents 3,000 drivers in Montreal told National Observer in an email earlier this month that the traditional taxi industry will be lobbying Premier François Legault for a second round of compensation.

Former finance minister Carlos Leitao intimated in August that more compensation might be possible and on the campaign trail Legault told the Quebec City-based taxi group Regroupement des Intermédiaires de Taxis that he was “open to studying the second part of compensation for taxi owners” according to Boussios.

“I think our fight now is to make sure the CAQ respects that,” he said.

Shifting costs and risks from companies to workers

Last week, 400 workers for Montreal-based all-electric taxi service Téo Taxi became members of the Quebec Teamsters union, making history as the first unionized salaried workers in the taxi industry in Quebec, according to Stéphane Lacroix, the union's director of communications and public affairs.

They were able to join that union because unlike Uber and traditional taxi drivers, Téo Taxi drivers are salaried. According to the Téo Taxi website, drivers are also entitled to paid leave and annual vacations.

Regardless of how much time they commit to driving for the company, Uber classifies drivers as independent contractors, or “partner-drivers" instead of employees. According to Emily Norgang, senior researcher at the Canadian Labour Congress, that is part of a "dangerous" trend where platform businesses like Uber "deliberately misclassify" their workers.

"What this means is that companies are avoiding costs associated with hiring employees. They are dodging taxes and they are able to engage workers without having to respect employment standards and workers rights. This only shifts costs and risks that were traditionally borne by companies onto workers, but it’s also placing workers outside of the scope of basic employment standards. So standards that are related to health and safety, to working hours, to minimum wages, to unjust dismissal," she explained. Racialized workers, immigrants and young people are likely to be disproportionately affected by exploitative working conditions, she added.

Statistics Canada data shows that the number of people who identify as 'incorporated self-employed workers without paid help' quintupled nationally between 1985 and 2015. That's the category, Norgang explained, where workers are likely to be self-employed because of a lack of formal employment opportunities or by misclassification (as opposed to workers who choose to be self-employed.)

In Ontario, workers suffered a setback this week when Conservative Premier Doug Ford unveiled his Open For Business Act. It repeals the provisions of the previous Liberal government's Bill 148 which protected workers from precarious work situations by placing the onus on employers to demonstrate that a person is not an employee. The new act, according to Norgang, puts the onus back on the employee to make the case that they are not an independent operator in front of court.

Not only does the Quebec government need to ensure that requirements for Uber are up to the same standards as traditional taxis, Norgang said, but it needs to have a "serious look at how this trend is spreading. Not just the taxi industry, the growth of platform businesses in other sectors, retail accommodation, services, finance, for example Airbnb, Taskrabbit, Kickstarter. [...] They are using new technology, new innovation to develop these exploitative business models which place workers outside of basic employment standards. It’s something the Quebec government has to look at not solely in the transportation industry but other industries as well."

Moreover, income from driving for Uber is not high. A report by the Economic Policy Institute from May reported that Uber drivers in the U.S. between January 2015 and March 2017 earned on average US$11.77 ($14.61) an hour after fees and driver vehicle expenses are deducted from passenger fares.

A former Uber driver corroborated these figures to National Observer. The driver, who did not want to be named, said that he earned between $13 and $18 an hour when he put in full-time hours for the company in Montreal between February and October, 2016. He said that while he could support himself on that income, he was vulnerable. The driver said he borrowed a car from a family member and didn't have huge bills to pay at home but would not be eligible for employment insurance, sick leave or vacation.

Meanwhile, a storm may be brewing for Téo Taxi. Media commentators have questioned whether the company is struggling to make ends meet in the light of news of a fresh round of investments solicited by the company.

Moreover, the defeat of the Quebec Liberals may not help business. The all-electric taxi service was launched in 2015 by Quebec entrepreneur and businessman Alexandre Taillefer, who enjoys a close relationship with the Liberal party and served as party chair during the election campaign. During the Liberal tenure he received financial support and regulatory breaks from the government, most recently in the shape of two loans worth $4 million in total for Téo Taxi. The Liberals also amended the taxi permit rules so that Téo could rent more than 20 taxi permits for his fleet of electric cars.

While he declined to respond to a question relating to the new government's plans for Téo in his most recent correspondence with National Observer, CAQ press attaché Suaves wrote in August that the party "has often deplored the disproportionate help from the government given to this company (Téo) alone. All taxi companies should benefit from the available funds made available to them by the Quebec government for the modernization of the industry."