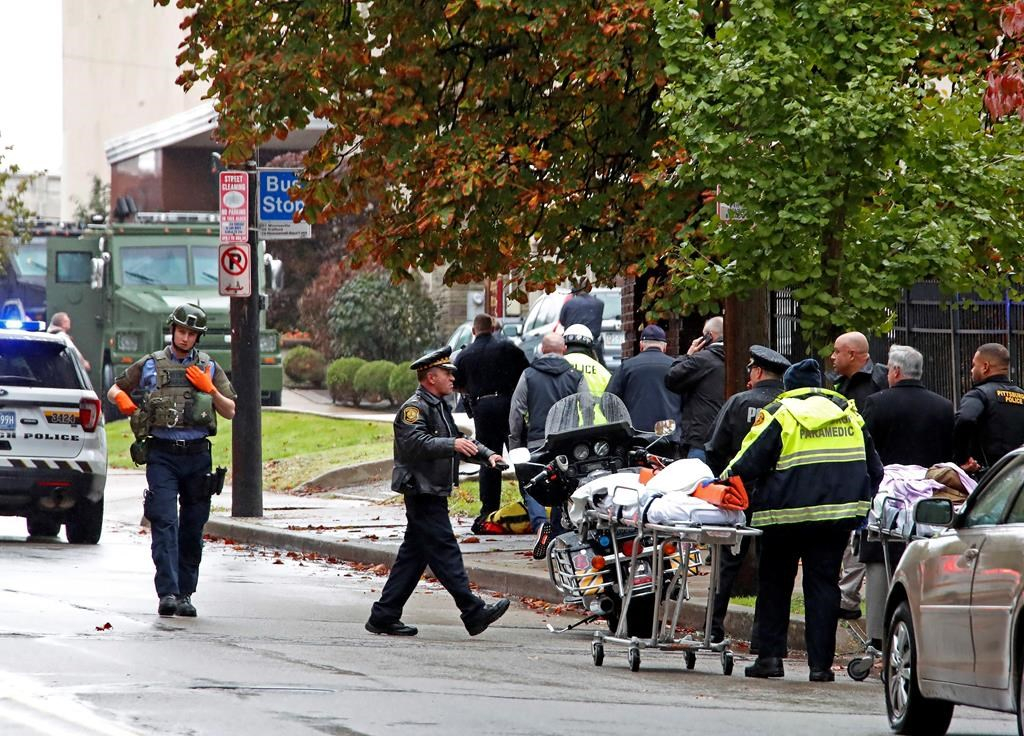 First responders surround the Tree of Life Synagogue, rear center, in Pittsburgh, where a shooter opened fire on Saturday, Oct. 27, 2018, wounding three police officers and causing "multiple casualties" according to Police. Photo by The Associated Press
Previous story
Next story

Canadian politicians and Jewish groups expressed sympathy for the victims and condemnation for the shooter after an attack at a synagogue in Pittsburgh on Saturday left 11 people dead and six others wounded.

Prime Minister Justin Trudeau condemned the mass shooting, which took place during a baby-naming ceremony at the Tree of Life synagogue in the city's Squirrel Hill neighbourhood, as a "horrific anti-Semitic attack."

"Canadians' hearts are with the Jewish community in Pittsburgh today," Trudeau wrote in a post on Twitter. "May the families of those murdered be comforted, and may the injured recover quickly and fully."

Meanwhile, Public Safety Minister Ralph Goodale tweeted that he shares "the deep anguish in the Jewish community," adding, "If Canada can help, we will."

Foreign Affairs Minister Chrystia Freeland said she was "horrified" by the shooting and called on Canadians to "stand together against hatred, intolerance, anti-Semitism and violence."

Conservative Leader Andrew Scheer wrote that he was praying for those affected, while the NDP's Jagmeet Singh said his "heart breaks" for the Jewish community in Pittsburgh.

Both opposition leaders also called for Canadians to stand firmly against hate and anti-Semitism.

Some of Canada's premiers also weighed in, with Ontario's Doug Ford saying we must work together to "defeat anti-Semitism and bigotry in all its forms," and newly minted Quebec Premier Francois Legault calling for people to "unite against hatred and racism."

British Columbia's John Horgan described the incident as a "deep violation of safety and security," while Alberta's Rachel Notley said her "heart is with all victims, their loved ones and everyone affected."

American officials said one person is in custody, and Attorney General Jeff Sessions said the Justice Department intends to file hate crime and other charges against him.

The suspect, identified by police as 46-year-old Robert Bowers of Pittsburgh, appears to have made virulent anti-Semitic posts on a social media platform popular with far-right extremists — including one made shortly before the attack.

Canadian Jewish groups were quick to condemn the shooting, which the Centre for Israel and Jewish Affairs called a "despicable and cowardly attack."

The Friends of Simon Wiesenthal Center for Holocaust Studies expressed "heartfelt condolences to all affected families," and said it was praying for a "Refuah Shlema," or speedy recover, for the injured.

Both groups also praised Canadian law enforcement agencies for their swift response to the attack, while reiterating that there was no direct threat to any Jewish community centre or house of worship in Canada.

In the wake of the Pittsburgh shooting, some Canadian police departments said they were increasing officer visibility around Jewish facilities.

York regional police, north of Toronto, and Ottawa police said there was no increased threat, but they were monitoring Jewish community centres and synagogues as a precaution.

The departments said they were also increasing officer presence to help ease concerns from the community in response to the shooting.

Toronto police said they made "adjustments" to local security, with Chief Mark Saunders tweeting that the force "stands with our Jewish community condemning the senseless violence against those in Pittsburgh."

A spokesman for the Vancouver Police Department said in an emailed statement that the force was in contact with the city's Jewish Federation, and would "continue to liaise with the community and offer support."