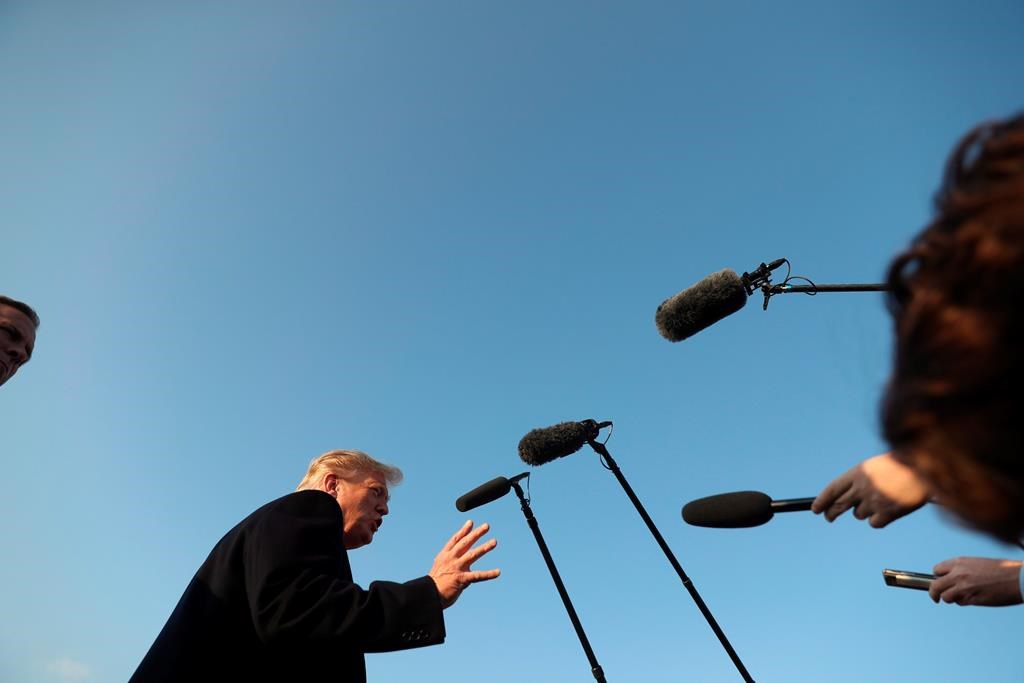 Under pressure over his no-prisoners, no-apologies style following the deadliest-ever anti-Semitic attack on U.S. soil, President Donald Trump sent his supporters Monday a familiar conservative comeback: it's all the media's fault.

It was the clearest attempt so far by the president to redirect the criticism his own fiery language has faced in recent days, particularly after a Trump supporter was charged last week in a series of attempted pipe-bomb attacks on prominent Democrats, liberals and presidential critics.

"There is great anger in our Country caused in part by inaccurate, and even fraudulent, reporting of the news," Trump declared on Twitter. "The Fake News Media, the true Enemy of the People, must stop the open and obvious hostility and report the news accurately and fairly."

As if on cue, one of those pipe bombs — the 15th so far; officials had warned there could be more still in the U.S. postal system — turned up Monday at a mail facility in Atlanta, addressed to the headquarters of CNN, a frequent and popular target of the president's ire.

But it was the gunman who shattered the serenity of Pittsburgh's leafy Squirrel Hill neighbourhood Saturday, reportedly shouting anti-Semitic epithets, who seems to have prompted Trump to renew and sharpen his attacks on the fourth estate — including with the historically loaded phrase "enemy of the people."

It all made for a tense White House press briefing Monday — especially when CNN's Jim Acosta pressed spokeswoman Sarah Sanders on whom exactly the president was describing in his tweets.

"If you're going to stand there and continue to say there are some journalists and some outlets in this country that meet that characterization, shouldn't you have the guts, Sarah, to state which outlets, which journalists, are the enemy of the people?" Acosta demanded.

Trump is far from the only prominent conservative to use the media and its coverage as a political foil.

"Make no mistake — he’s got the media on his side," Conservative Leader Andrew Scheer said of Prime Minister Justin Trudeau last week in a speech kicking off the 12-month sprint to the 2019 federal election.

And in an "open letter" that appeared in the Toronto Sun that same weekend, Scheer promised to "stand up to this government, the media, and the privileged elite on their behalf" — a turn of phrase that, while not as harsh as Trump's, strikes a more confrontational tone than Canadians might be used to hearing.

"There's a portrayal of journalists as opponents to the average person, that they represent institutional adversaries of some kind, and this is new — and somewhat concerning," said Prof. Tim Currie, director of the school of journalism at the University of King's College in Halifax.

A Trump-style assault likely won't be in the offing, in part because it could be seen as aping the unpopular U.S. president, but also because the electorate in Canada isn't as polarized as it is south of the border, he added.

"Those divisions aren't as apparent here in Canada as they are in the United States. I don't think we've seen the fracturing of the media landscape to the same degree as we have in the U.S.," Currie said. "It's yet to be seen if it's going to work here."

It all conjures memories of the sparring matches between the Parliamentary Press Gallery and the Prime Minister's Office under Scheer's predecessor Stephen Harper, whose party was combative with the national media in Ottawa.

"You won't believe what the Press Gallery just did in Ottawa," the Conservatives told supporters in a 2013 fundraising email after the government refused to allow reporters — only photographers and TV cameras — to cover one of Harper's caucus speeches.

Most outlets chose to boycott Harper's speech, ending up inside the New Democrat caucus room when the NDP made a show of welcoming them with open arms.

"We knew they wouldn't give us fair coverage," the email read, "but this is a new low for the Ottawa media elite."