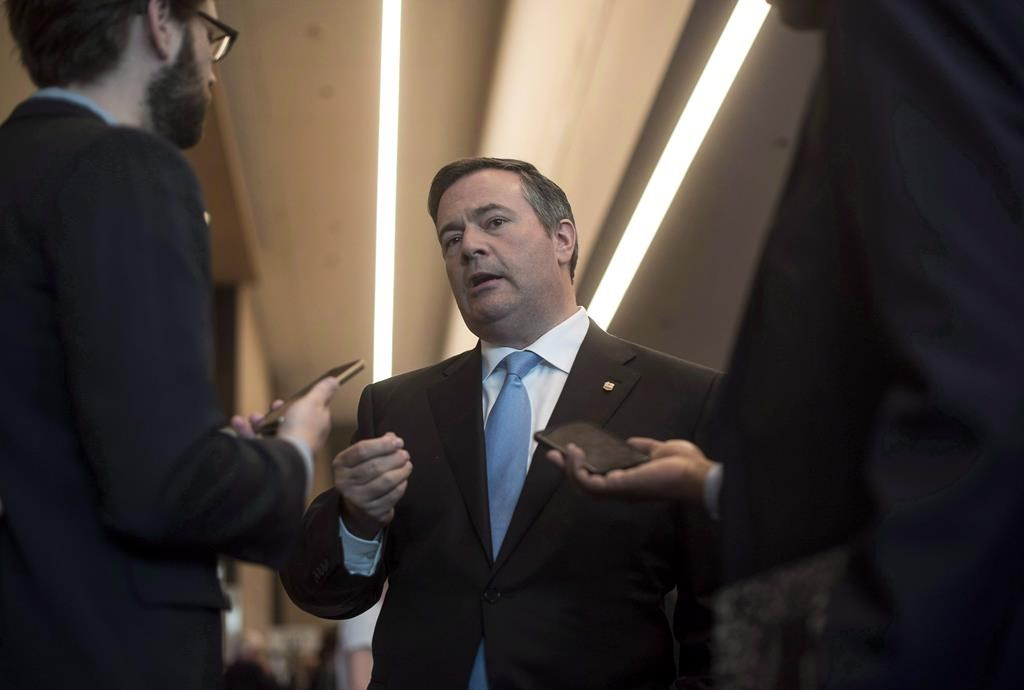 Jason Kenney, leader of the United Conservative Party in Alberta, speaks with a reporter at the Conservative national convention in Halifax on Saturday, August 25, 2018. File photo by The Canadian Press/Darren Calabrese
Previous story

Alberta United Conservative Leader Jason Kenney has turfed a party member who once ran the call centre for his leadership bid amid reports the worker is behind an online store that sells white supremacist memorabilia.

"I am shocked and disturbed by reports of hateful and extreme online activity by a UCP member named Adam Strashok," Kenney said in a statement on Twitter Tuesday.

"Neither I nor anyone on my staff was aware of the extreme views of the individual in question."

He added that he recently asked the board of the UCP to develop a process for screening applicants for membership "to block those who have expressed hateful or extreme views."

Strashok, who ran the call centre for a time in 2017 during Kenney's United Conservative leadership bid, could not be immediately reached for comment.

Kenney was responding to a story in Ricochet Media that investigated ties from members of the Canadian Armed Forces to an online store glorifying the era of white rule in Rhodesia, now known as Zimbabwe.

It's the latest in a series of UCP supporters voicing or associating with those expressing hateful and intolerant views.

Earlier this month three nomination candidates in a west Edmonton constituency were photographed with the anti-immigrant Soldiers of Odin group. Two of the candidates said they were unaware of the group's notoriety when they posed for pictures.

Critics, including Premier Rachel Notley, have criticized Kenney for engaging in "dog whistle" politics by officially denouncing such views but in such a sterile, reactive manner through statements on social media that extremists may feel like they still have a home in his party.

Kenney was not made available for an interview. In his statement he said "I have been crystal clear throughout my public life, and from day one of the Alberta (conservative) unity movement that I reject unequivocally voices of hatred and bigotry."

Kenney cited his history in the former federal Conservative cabinet advocating for multiculturalism and Canada's ethnic, religious, and cultural diversity.

"I have continued to champion respect for human dignity and pluralism since beginning the unity movement in Alberta two and half years ago, reflected in the diverse range of Albertans seeking UCP nominations.

"My leadership was based in part on a commitment to screen out applicants for UCP nominations that have expressed or been association with extreme or hateful views. We have adopted what I believe is the most rigorous screening process in Alberta history as a result."

Nevertheless, there have been controversies with some UCP candidates.

Todd Beasley was disqualified as a candidate in Brooks-Medicine Hat in the summer after making anti-Islamic comments on social media.

Also in the summer, Sandra Kim was allowed to run for the nomination of Maskwacis-Wetaskiwin despite homophobic social media comments from 2015. She later apologized and says the remark does not represent her current views.

Cindy Ross, a one-time nominee for Calgary Fish Creek, apologized last month for online comments she made years ago opposing the opening of a mosque in Fort McMurray.

Alberta's NDP, in a statement, said the inconsistency on which candidates get to stay and which have to go for such statements is revealing.

"Jason Kenney has proven, through his inactions, that he allows - and welcomes - extremists in the UCP," said the party in a statement.

"The #UCP and @jkenney need to kick these weirdos out of the party for the sake of decency," Jean wrote. "They should never have been there in the first place. There is no place for hate and bigotry in our society or political landscape. Stop playing footsy with freaks!"