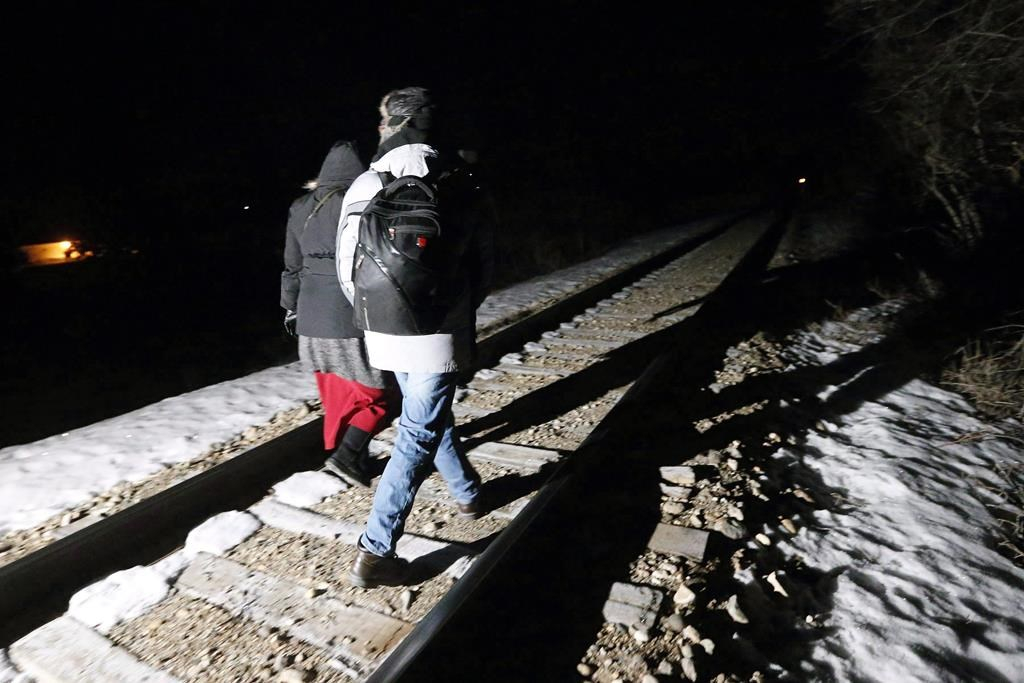 Early Sunday morning, Feb. 26, 2017, migrants from Somalia cross into Canada illegally from the United States by walking down this train track into the town of Emerson, Man., where they will seek asylum at CBSA. File photo by The Canadian Press/John Woods
Previous story
Next story

The Canada Border Services Agency should speed up its removals of failed refugee claimants who are still in Canada, Public Safety Minister Ralph Goodale says.

The CBSA has set a new target of completing 10,000 removals by the end of the 2018-19 fiscal year in March. This would mean an increase of 35 per cent from what's been normal over the last two years.

Goodale said Wednesday that the CBSA has been given $7.46 million more to ensure that all asylum seekers who have exhausted their legal avenues of appeal are removed from the country.

"We've indicated that we have to pick up the pace in terms of that activity. We've provided some extra resources for CBSA to do the work that's necessary," Goodale said. "The law is clear. When a person has been found to be ineligible to be in Canada and they have exhausted all avenues of appeal then they become subject to removal and CBSA is obliged to remove people as rapidly as possible when they fall into that situation and they do that job quite literally every day."

But Jean-Pierre Fortin, national president of the Customs and Immigration Union said the special inland enforcement officers who handle these removals were not told of the plan to set targets and speed up, let alone consulted. He said staff found out about the plans to hurry up refugee removals from seeing it in the news media.

"The government didn't create any special team or hire new people to perform these targets. (Staff) are saying they don't really understand or know how it's going to be feasible," Fortin said. "Right now for them, they're overwhelmed already in their work, so when they saw that in the news, they said they don't understand."

Fortin said these officers are at a loss as to how they will be able to increase their workload with no additional resources.

"The No. 1 thing that the government needs to do is to make the announcement that they will be hiring more resources right now in order to meet those targets, in order to secure the land border next summer. They need to be prepared," Fortin said.

By law, CBSA is required to enforce removal orders as soon as possible after all avenues of appeal have been exhausted.

But many factors can impede a removal, such as other legal proceedings, temporary suspensions of removals in certain categories, missing travel documents, medical issues or applications for pre-removal risk assessments for those who are eligible.

Prime Minister Justin Trudeau said Wednesday that the government has been looking at ways of speeding up these cases to ensure Canada's immigration system remains an integrated system that functions properly.