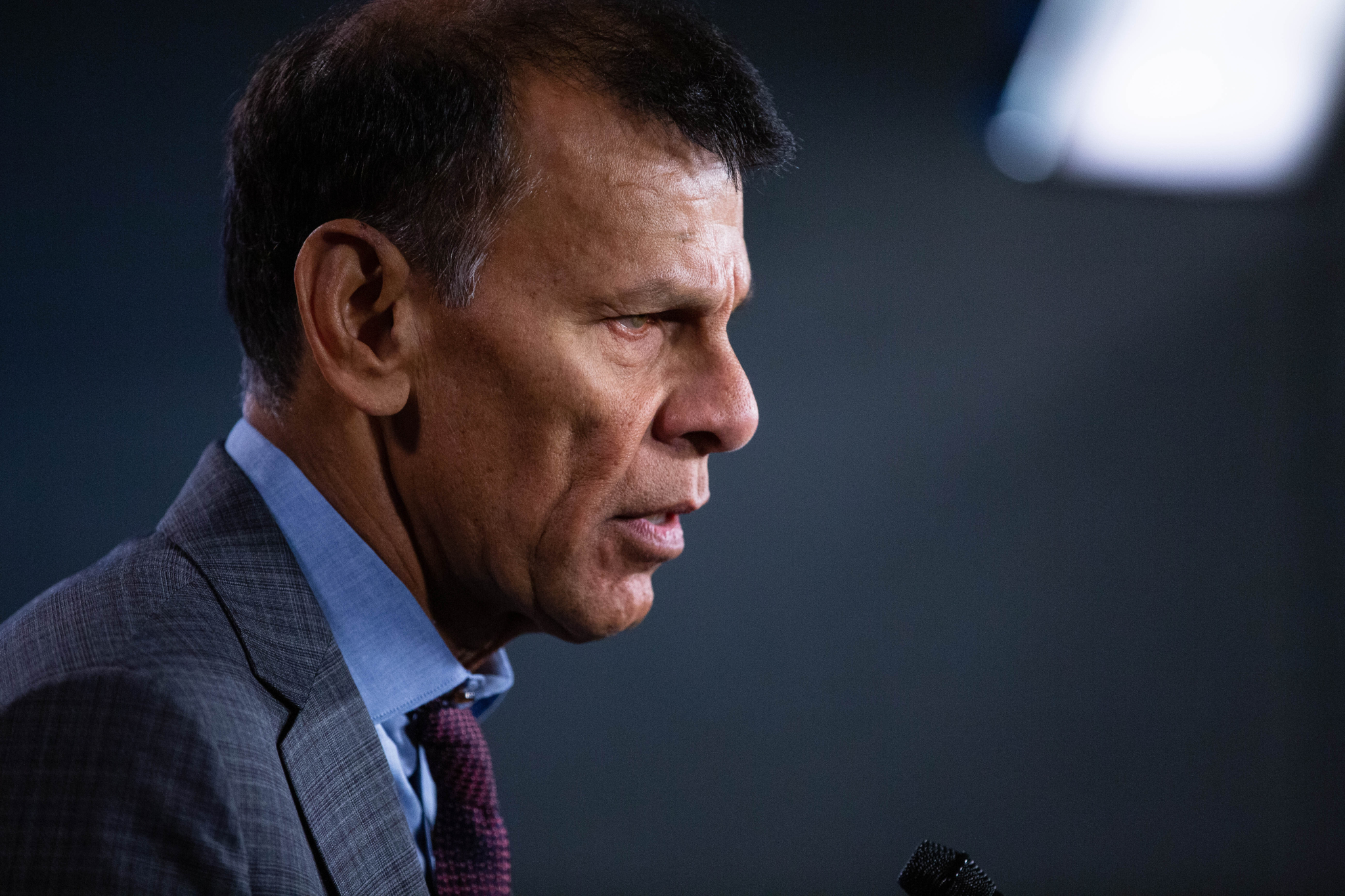 Hassan Yussuff, president of the Canadian Labour Congress and co-chair of the Just Transition task force, speaks to media on Oct. 31, 2018 on Parliament Hill. Photo by Alex Tétreault
Previous story
Next story

A federal task force has advised the Trudeau government in a confidential report to increase support for workers and communities affected by a national coal power phase-out.

This would include extending an existing five-year multimillion dollar plan that boosts job training and other services for displaced workers.

The recommendation is one of many contained in the “interim report,” drafted by a group of labour, environmental, industry and municipal representatives. They delivered it to Environment and Climate Change Minister Catherine McKenna a few weeks ago, and are now working on a final version.

The report itself has not yet been released publicly, but National Observer learned about its content by speaking to some of the people who were picked by the government to sit on the task force.

The 11-member advisory group was launched in April to study how best to ease the estimated 50,000 Canadians and their families working in and around the nation’s 17 coal plants away from the industry. Their recommendations will be important to help the Trudeau government follow through with a plan to phase out coal-fired power plants nationwide by 2030.

Plants will either shut down, convert to another fuel source like natural gas or capture the carbon emitted before it escapes to the atmosphere. But labour leaders have warned Canada needs a "just transition" for displaced coal workers in the four provinces — Alberta, Saskatchewan, New Brunswick and Nova Scotia — where coal is still burned to generate electricity.

This tough transition will ultimately have to occur for other fossil fuels if the planet hopes to cut down on carbon pollution. Alberta, home to the world's third-largest reserves of crude oil after Saudi Arabia and Venezuela, would be particularly affected.

“It’s not an easy thing. It’s easy to say, ‘You’re going to phase out an industry, this is government policy’ — the next thing is, what will take its place? Because you can’t just shut down a coal generation facility,” said Hassan Yussuff, president of the Canadian Labour Congress and co-chair of the Task Force on Just Transition for Canadian Coal Power Workers and Communities.

“You’ve gotta think, ‘OK, what will make up the electricity grid going forward? Is it reliable? More importantly, is it a good source for the provinces?’ And of course, you can’t do that stuff overnight.”

Yussuff and another task force member both said they expect the minister to issue a formal response in the coming weeks.

“We will be reviewing the report closely,” said McKenna on Nov. 2 from China, in response to questions by National Observer during a conference call with reporters. “We’re still reviewing the report, but as we talk about the need to power past coal and our commitment in Canada to phase out coal by 2030, we know there has to be a priority to supporting workers and communities.”

Coal is one of the largest sources of carbon pollution globally. Toxic pollutants created when burning coal like mercury and sulphur dioxide are also bad for human health, causing respiratory diseases and premature deaths. Coal was responsible for about a tenth of all of Canada’s carbon pollution and is by far the most emissions-intensive form of electricity generation, even more than heavy fuel oil.

It’s clear that emissions from coal power are inconsistent with Canada’s support for the Paris climate agreement, that aims to keep global average temperature rise below 2 degrees Celsius above pre-industrial levels to avoid more destructive effects of climate change. The world’s top climate scientists recently issued a joint warning that there is only a dozen years left to keep warming to 1.5C and avoid a much higher risk of severe drought, floods and poverty for hundreds of millions of people.

Canada and the United Kingdom launched the Powering Past Coal Alliance in 2017 — which now counts 28 national members plus other levels of government like cities, provinces and U.S. states — in part as a response to reports about coal production ramping up around the world. It aims to phase out traditional coal-power plants globally.

In contrast, U.S. President Donald Trump has attempted to ease regulations on coal to revive the industry as it struggles to compete with cheaper energy from natural gas.

In 2016, Nova Scotia generated 63.7 per cent of its power from coal, compared to 49.3 per cent in Saskatchewan, 47.4 per cent in Alberta and 20.7 per cent in New Brunwsick, according to National Energy Board figures. Ontario has already phased out coal power, while Alberta has its own provincial plan to phase out coal by 2030.

Yussuff said Alberta was “much more on the cutting edge of the phase out” because of the province’s more deregulated electricity market and the money provided by the Alberta government for companies to transition away from coal. Some plants that are new enough and have relatively available natural gas are in the process of switching, he said.

“Other places that we did travel to — Saskatchewan — they had yet to start thinking about how they were going to deal with the coal phase out,” he said. “They’re going to have to figure out what will be replacing coal in an interim basis, and then what they will start to have to do.”

Cash to municipalities, not just workers

Saskatchewan, New Brunswick and Nova Scotia have been seeking what are known as equivalency agreements with the federal government, which means they commit to lowering an equivalent amount of carbon pollution elsewhere in their economies, in exchange for allowing coal plants to keep operating.

These agreements may mean that coal power will be phased out at different points in time. In part, Yussuff said, this is why the report will recommend that the Trudeau government extend a five-year $35 million commitment it made in the 2018 budget for “skills development and economic diversification activities” to help workers displaced by the coal phase-out.

Leduc County Councillor Rick Smith — a task force member who represents a region south of Edmonton home to coal-fired plants that employ hundreds of people and provide a chunk of municipal tax revenue — said the group wanted to emphasize the importance of putting its commitments into policy.

“One of the recommendations was that the task force saw the importance of having it (policy) in legislation, so it would be something that would continue year to year, or election to election,” he said.

The task force met in Ottawa and then toured the four provinces, meeting with workers, government, employers and other groups.

For example, in Coronach, Sask., the panel heard from many residents, some of whom "questioned where they would live or work after the mine and plant closure," according to CBC News.

Whereas in Nova Scotia, CBC News reported that the local power company and its union downplayed the coal phase-out during the panel's appearance, saying planning has been underway for some time and alternate power options are available.

“We visited most of the plants, we did most of the municipalities, we had open houses, met with the workers, with the unions, gathered a lot of information, and that was over a period of two months,” said Smith.

“A lot of the recommendations are directly connected to what we heard from municipalities, from workers, from unions and from communities.”

The task force is also recommending that the government commit to infrastructure funding for municipalities to access in order to attract other businesses and offset job losses, said Yussuff. As in Leduc County, coal plants provide a tax base to the communities they are in.

A third recommendation is to extend support to workers to help them quickly and efficiently access benefits like employment insurance, retraining and support for moving and other effects likely to happen with the phase-out, he added.

Smith said because most workers in the industry are unionized, the unions did a “fairly good job” of raising awareness among employees about understanding “just transition.”

“The awareness probably at the beginning of our tour, starting in May, would have been a little bit lower, however, as we went around and met with more people, we found that the awareness and the interest was pretty keen and focused,” he said.

“A lot of people want to know what this is going to look like.”

Governments, at all levels

Governments, at all levels are apparently paralysed by the notion of shifting the economy away from fossil fuel. Their timidity is laughable, were tt not so tragically stupid. Instead of wasting Billions on a pipeline to hell, they should have put that money into kick starting the sustainable energy sector. There is no lack of good ideas and mental resources in Canada - just a fatal lack of will on the part of politicians to take an entrepreneurial leap and shift Canada - once and for all, from a colonised resource extraction slave nation, to one that capitalises on the brains, talents, and human resource of its citizens. Our so-called wealthy elites are equally to blame for squirreling away their wealth offshore and failing to re-invest in the country that nurtured them. Stupidity and greed - a wonderful recipe for failure.

Everything Betsy said! However, I now have a tentative modicum of respect for Catherine McKenna and even Justin Trudeau, for apparently taking baby steps beyond issuing platitudes. By comparison with the insulting deceit concerning oil and pipelines, this may offer a ray of hope.