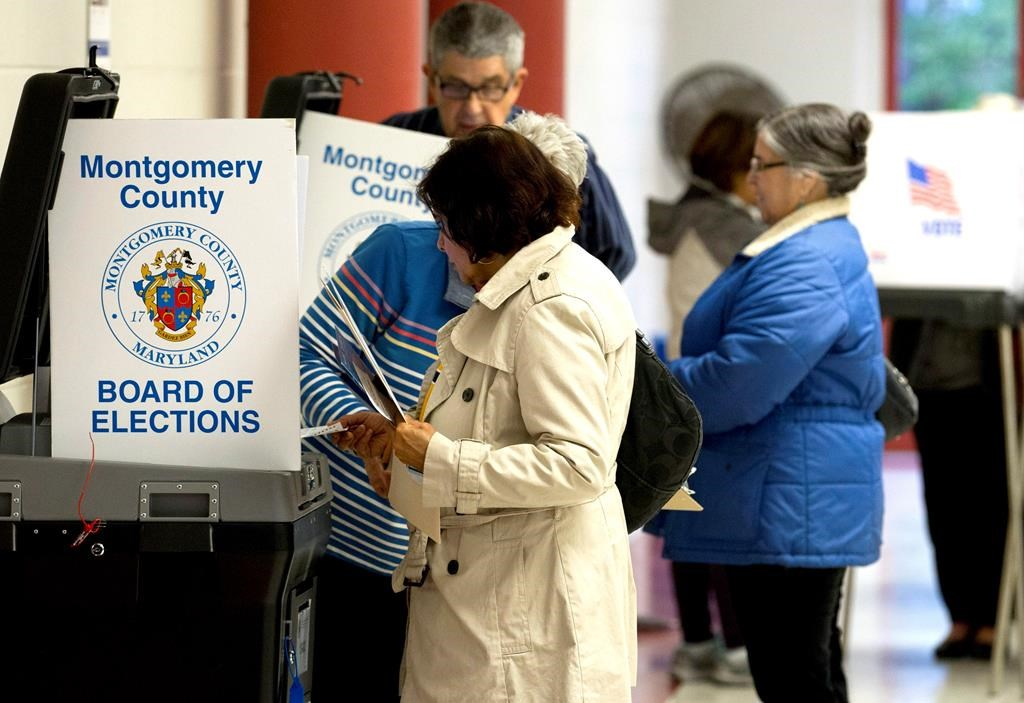 People cast their vote in the scanner machine at polling place during the U.S. midterm election on Tuesday, Nov. 6, 2018, in Silver Spring, Md. Photo by The Associated Press/Jose Luis Magana
Previous story
Next story

Democratic candidates buoyed by widespread opposition to Donald Trump seized the balance of power on Capitol Hill, but Tuesday's U.S. midterm elections failed to produce what critics had hoped would be an even more scolding rebuke of the most controversial and divisive president of the modern era.

But an important battle in Trump-friendly Kentucky went to the Republicans as incumbent Andy Barr held off a strong challenge from Amy McGrath, a former fighter pilot, putting a dent in Democratic promises of a so-called blue wave.

For weeks, pollsters have been projecting that the Republicans would lose control of the House but maintain control of the Senate, the result being a divided Congress that would untether some of Trump's most vociferous political challengers.

As the night progressed, it shaped up precisely that way. Projections showed the Democrats poised to turn as many as 35 seats, even as their aspirations of an even more impressive breakthrough gradually faded away.

True to form, both sides declared victory. "Tomorrow will be a new day in America," said Democratic Leader Nancy Pelosi.

In a closely watched governor's race in Florida, where it's been nearly 25 years since a Democrat held the job, Tallahassee Mayor Andrew Gillum — aspiring to be the state's first African-American governor — conceded defeat in a taut battle with Republican challenger Ron DeSantis.

That state's Democratic senator, Bill Nelson, also suffered a narrow loss at the hands of Republican opponent Rick Scott, with all signs pointing towards the GOP actually widening its Senate majority as Democratic Sen. Heidi Heitkamp of North Dakota and Missouri's Claire McCaskill went down to defeat.

In Texas, one of the most closely watched races of the 2018 political season, Republican incumbent and one-time Trump foil Ted Cruz managed to fend off a concerted challenge from the charismatic Beto O'Rourke, whose youthful exuberance and ability to mobilize younger voters made him a national Democratic superstar.

There were, of course, critical Democratic victories. Retired navy commander Elaine Luria wrested a House seat away from former navy SEAL and first-term congressman Scott Taylor in Virginia's 2nd district, a region where the president has proven deeply unpopular.

A Democratic House represents a likely threat to Trump's legislative agenda for the next two years, and provides Democrats subpoena power to investigate the president — his long-elusive tax returns are high on their wish list — or even trigger impeachment proceedings, although that seems unlikely with a Republican Senate.

"If they want to impeach President Trump, I would give them some advice: I've been there, done that with (Bill) Clinton, and it didn't work out well for us," Graham said. "I would think twice about it. It will blow up in their face."

Gubernatorial races were key too, since they determine control of state governments that ultimately decide how electoral districts are redrawn, shaping the path to victory for presidential hopefuls in 2020.

But Tuesday's elections remain noteworthy for the fact they generated unprecedented interest among voters keen to weigh in on the first two years of a presidency riven by angry anti-immigrant rhetoric, bitter political feuding and pointed personal attacks on the part of Trump himself.

"This particular year is an exception because of the anti-Trump feeling on the part of a lot of them."

There are too many fundamental differences between electoral systems and cycles in the U.S. and Canada for this year's stateside turnout to offer any lessons for anyone hoping to generate similar levels of interest north of the border in 2019, Haussman said.

Turnout, she said, has everything to do with a campaign's most prominent figures and whether voters who aren't regular participants in the electoral process are more motivated to take part.

More than 68 per cent of registered voters in Canada turned out to weigh in during the last federal election in 2015, when Justin Trudeau's youthful, social-media-savvy campaign and promised re-engagement with Indigenous communities helped to mobilize young and disenfranchised voters — the strongest turnout since 1993.

That year, turnout in Canada exceeded 69 per cent. And in both cases, voters turned up to turf out long-standing Conservative governments — Stephen Harper in 2015 and Kim Campbell, who took over briefly for Brian Mulroney, 22 years earlier.

In the United States, during what's been one of the most remarkable political seasons in the country's modern history, some experts are wondering if the country is in the midst of a historic partisan realignment, one that could have lasting repercussions on the traditional red-blue model.

"Things are pretty good, yet we have all this division and we have this president who's relatively unpopular, so we have this strange juxtaposition," said Kent State politics professor Michael Ensley, citing Trump's poor approval ratings despite a rollicking U.S. economy and the absence of any major foreign-policy challenges.

Presidential tides are supposed to wax and wane with traditional economic indicators like job creation, wage rates, unemployment and consumer confidence — all of which are going gangbusters, according to numbers released last week. Yet for Trump, talking about the economy just isn't very exciting, he admitted on the weekend.

"The broad question I keep asking myself is, are we at a point of a fundamental change in the American party system," Ensley said. "I'm torn on the answer to that question."

On eve of U.S. midterms, not all women are mobilized against Trump

Trump’s America is the land of despair