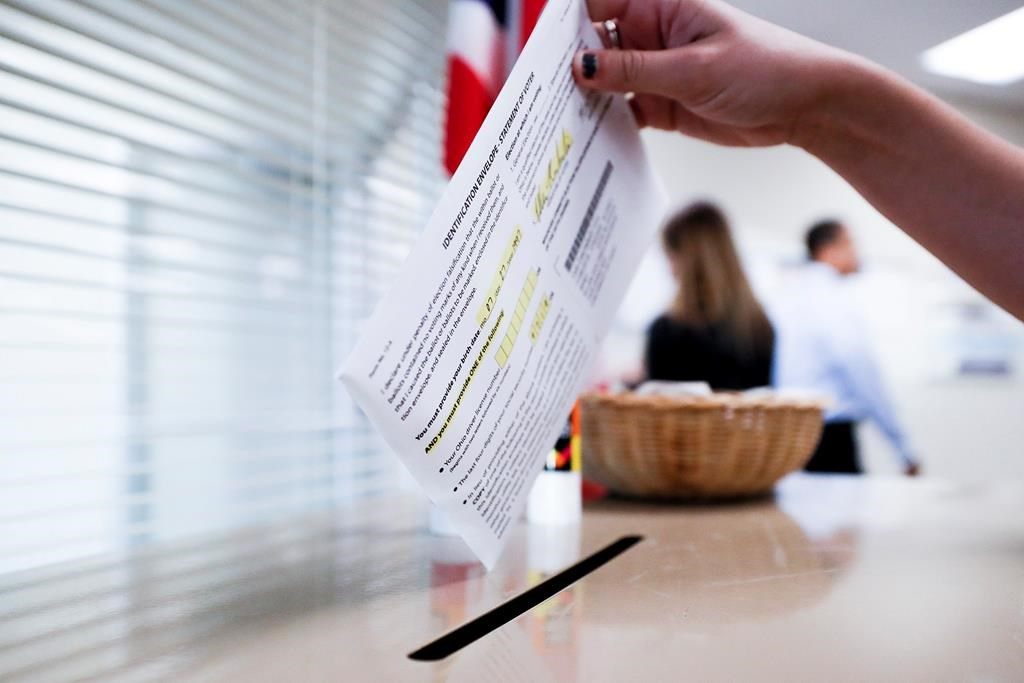 In this Oct. 10, 2018, file photo, a voter casts their ballot on the first day of early voting at the Hamilton County Board of Elections in Cincinnati. File photo by The Associated Press/John Minchillo
Previous story
Next story

American expatriates and political junkies crowded a university library, pubs and other venues across Canada on Tuesday to watch the incoming results of the crucial U.S. midterm congressional elections, viewed by a deeply polarized electorate as a referendum on President Donald Trump.

At a library in Toronto, a few dozen people chatted among themselves as they watched the results — a turnout which surprised Mark Feigenbaum, chairman of Republicans Overseas Canada.

"I'm astounded at how much attention this has gotten," said Feigenbaum, who fretted there might be protests at the invitation-only event, which there weren't. "A midterm election, you wouldn't get three people watching before."

Feigenbaum said controversy over Trump's approach and policies was responsible for the surge in interest.

At a well attended Democrat event at a nearby Toronto pub, scores of people hollered and hooted when CNN reported one of their candidate's had won. But not everyone saw the enthusiasm as warranted as a landslide eluded Democrats.

"It's not the repudiation of Trump that we wanted," said Diane Horvath, an American-Canadian who lives in Toronto and votes out of Virginia. "It's sickening really."

Julie Buchanan, with Democrats Abroad, said the interest in the vote was more akin to a presidential election. Expat votes had soared compared to the 2014 election, she said.

The crowd at the university library gasped when, at one point, results showed Democrat Beto O'Rourke appeared poised to unseat well known Republican Sen. Ted Cruz. However, Cruz prevailed, to the jeers of the Democrat faithful.

Christopher Sands, director of the Center for Canadian Studies at Johns Hopkins University in Washington, said the biggest impact of the election on Canada relates to trade.

Specifically, he said, who controls the House of Representatives determines when trade bills such as the new North American trade deal known as USMCA — the United States-Mexico-Canada Agreement — get introduced.

"Congress has the last word on trade," Sands told attendees.

Democrats, he said, would surely try to stall the deal as a way to extract concessions on other issues from the Republican president.

Feigenbaum, a lawyer and cross-border tax specialist, said he worried a Democrat-controlled House would slow legislation, which he said would be detrimental to getting anything done.

The U.S. consulate general and University of Toronto's Munk School of Global Affairs organized the "politics and pizza" event. Among attendees were Consul General Greg Stanford, who took up his post in August.

In Ottawa, Harvard alumni gathered at a pub in Ottawa's Byward market. T.J. Misra, a first generation Indo-American who grew up in Manhattan and San Francisco, said she found it a relief to be in Canada during the overheated polarizing rhetoric of the midterms.

"Canada is honestly an intellectual oasis, it's a haven. You can actually think through your thoughts here, you can test them out without getting a lot of aggressive feedback," Misra said.

Misra was reluctant to criticize what's happening in the U.S. but said her parents and sister, who were still in San Francisco, have been called terrorists because of their skin colour.

Democrats Abroad had also scheduled events in other cities, including Vancouver, Edmonton and Montreal.

All 435 seats in the U.S. House of Representatives and 35 Senate seats were up for re-election. Also at stake were 39 governorships and the balance of power in most state legislatures.

Trump himself acknowledged midterm voters would be passing judgment on his presidency.

"In a certain way, I am on the ballot," Trump said on Monday as he urged supporters to get out to vote. "The press is very much considering it a referendum on me and us as a movement."

An estimated eight million American citizens are thought to live outside the United States with those living in Canada among the largest diaspora. Estimates range from hundreds of thousands to more than one million Americans in Canada.

— With a file from Joan Bryden in Ottawa

On eve of U.S. midterms, not all women are mobilized against Trump