By James McCarten | News, US News, Politics | November 8th 2018
#83 of 116 articles from the Special Report: State of Journalism 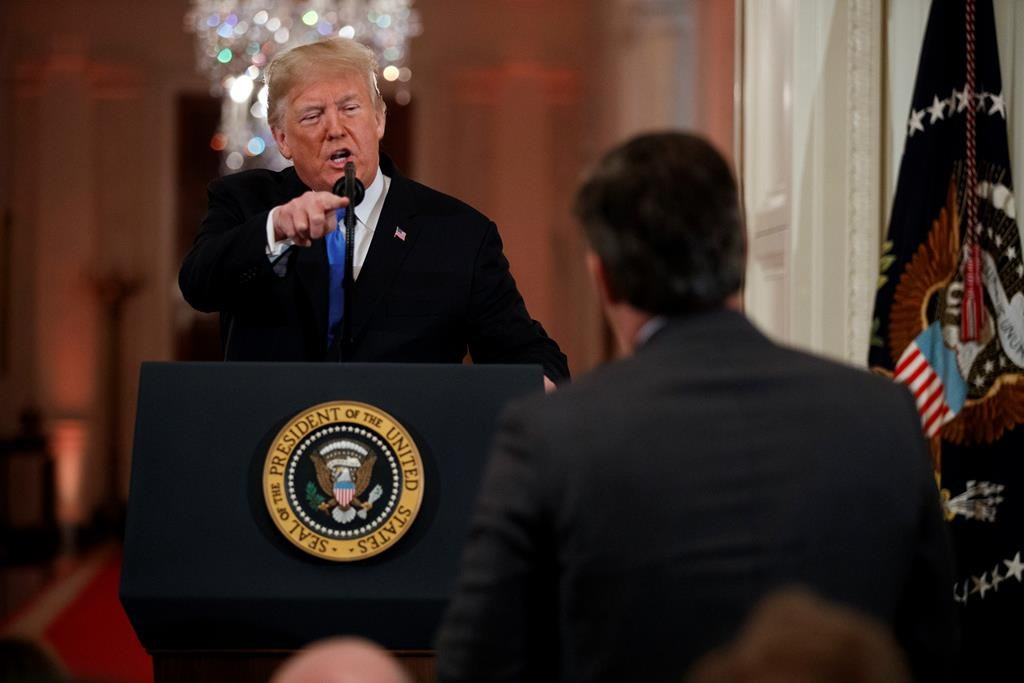 President Donald Trump speaks to CNN journalist Jim Acosta during a news conference in the East Room of the White House, on Wednesday, Nov. 7, 2018, in Washington. Photo by The Associated Press/Evan Vucci
Previous story
Next story

One dramatic White House expulsion might have gotten much of the attention Thursday, but there's been another that free-speech advocates say must not be ignored: the banning of CNN reporter Jim Acosta.

The network's chief White House correspondent and frequent Donald Trump foil had his media pass revoked Wednesday after a remarkable 90-minute news conference in the East Room that saw the president engage in several heated exchanges with reporters, all while an aide struggled to manage their access to a wireless microphone.

Acosta was holding the microphone, trying to ask a follow-up question, while the president was calling on a different reporter. The aide tried to take it away and Acosta resisted, briefly touching her on the arm as he did.

"We will never tolerate a reporter placing his hands on a young woman just trying to do her job as a White House intern," press secretary Sarah Huckabee Sanders said in a series of tweets. "The White House is suspending the hard pass of the reporter involved until further notice."

Acosta responded to the Twitter thread with a single sentence: "This is a lie."

That assessment gained even more traction Thursday when The Associated Press, citing a video editing expert, reported that a video clip distributed by Sanders on Twitter had been "doctored" to make Acosta's contact with the aide appear more aggressive than it really was.

Trump's combative relationship with the media in general, and CNN in particular, has been a fixture of his time in federal politics, fuelling support from a grassroots, blue-collar base that cheers his descriptions of unfriendly reporters as "enemies of the people" and their work as "fake news."

But revoking the credentials a journalist needs to do his or her job of holding the government to account is dangerously close to a violation of the U.S. Constitution, said journalism scholar Frank LoMonte.

"The First Amendment forbids punitive action for constitutionally protected expression, and asking aggressive questions of an elected official is certainly within the protection of the First Amendment," said LoMonte, director of the Brechner Center for Freedom of Information at the University of Florida.

It might not be on the same level as firing Attorney General Jeff Sessions, which the president also did Wednesday. But LoMonte said there's little doubt that Trump is trying to delegitimize media coverage that doesn't mesh with his administration's preferred political narrative.

"It's completely fair game for a politician to say he doesn't think a newspaper or a TV station treats him fairly. The First Amendment applies to Donald Trump, too," he said.

"But when a president repeatedly declares that information provided by news organizations is not to be trusted and that government pronouncements are the only trustworthy source of information, that's crossing a red line."

The New York Times urged the White House to reconsider Thursday in a column by the newspaper's editorial board headlined, "Let Jim Acosta do his job."

"Mr. Trump is not likely to temper his rhetoric," it concludes. "But those he listens to ... should try to impress on him the danger of confounding loyalty to Donald Trump with loyalty to the constitution and to democracy."

The White House has never before revoked a "hard pass" as a consequence of a reporter doing his or her job. Richard Nixon came close after Washington Post revelations about the Watergate scandal, banning the newspaper from all events except for press briefings.

Trump, on the other hand, has been trying to block reporters since before he became president. During his 2016 campaign, a number of outlets were shut out by the then-Republican nominee, including newspapers in Idaho and New Hampshire, as well as online outlets such as the Huffington Post, Politico and BuzzFeed.

The White House Correspondents' Association denounced the decision to revoke Acosta's White House access, calling it unacceptable and disproportionate to the purported offence. The international Committee to Protect Journalists did the same and called on the administration to restore his credentials.

And the move sparked fresh public interest in an online petition being circulated by Media Matters for America, a non-profit media watchdog, that calls on other members of the association to show solidarity to any correspondent banned or blacklisted by the U.S. president. More than 333,000 people have signed the petition.

It's not the role of working journalists to do battle with the White House, which is a job for the countless advocacy organizations that work on behalf of a free press, LoMonte said. Indeed, he warned, to do so would risk validating the president's enemy-of-the-people narrative.

"It's a bad look for working beat reporters to abandon their reporting role and jump into the arena," he said.

"The whole reason the president likes to push the buttons of journalists by personally insulting them is that he's hoping to create a narrative that journalists are at war with him. The worst thing a journalist can do is take that bait and enter into combat."

In Canada, where reporters don't get routine access to the Prime Minister's Office, media credentials to access Parliament Hill — more akin to the U.S. Congress than the White House — are managed by the parliamentary press gallery, not the PMO.

"The Canadian parliamentary press gallery opposes the arbitrary cancellation of a reporter's accreditation as an unjustifiable limit on media access to a democratically elected government and a limit on the free press," president Philippe-Vincent Foisy said in a statement.

Canadian journalists are no strangers to political efforts to impede their work, or finding that demonstrations of solidarity can be used to attack their objectivity.

"You won't believe what the press gallery just did in Ottawa," the Conservatives told supporters in a 2013 fundraising email after the government refused to allow reporters — only photographers and TV cameras — to cover one of then-prime minister Stephen Harper's caucus speeches.

Most outlets chose to boycott Harper's speech, instead ending up in the New Democrats' caucus room when the NDP made a show of welcoming them with open arms.

"We knew they wouldn't give us fair coverage," the Conservative email read, "but this is a new low for the Ottawa media elite."

Liberals, too, have played the other side of the field for their political advantage. Leader Justin Trudeau made a show of taking media questions at length during his successful 2015 election campaign, an effort to set up a contrast with the notoriously media-wary Harper.

— With files from Mike Blanchfield in Ottawa and The Associated Press