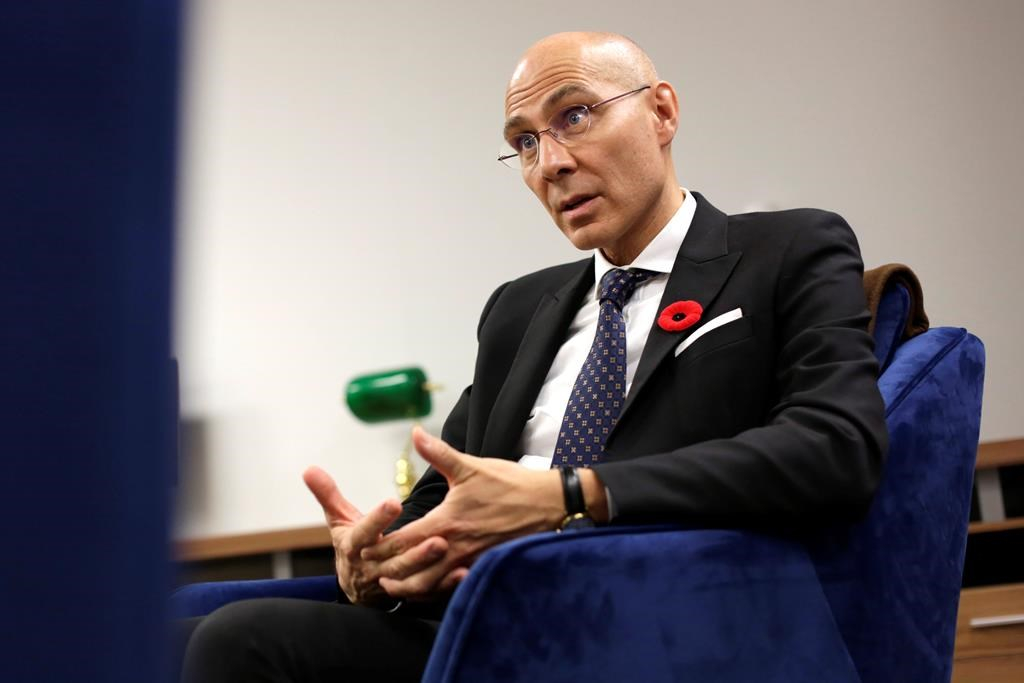 Volker Turk, the assistant high commissioner for the UN Council on Refugees, is shown during an interview in Ottawa on Tuesday, Nov. 6, 2018. Photo by The Canadian Press/David Kawai
Previous story
Next story

Neither Canada nor the United States is experiencing a crisis in asylum claims, says the United Nations' assistant high commissioner for refugees.

Volker Turk, an Austrian in charge of refugee protection for the UN, was in Ottawa this week to meet with Canadian border officials. He said in an interview that Canada's recent spike in irregular migrants is nothing compared to the millions of refugees who pour every year into much poorer countries.

Likewise, the migrant caravan making its way through Mexico toward the United States, numbering in the low thousands of people, is small compared to the vast migrations borne in recent years by countries like Lebanon, Jordan and Turkey, which have taken in over five million Syrian refugees.

"A lot of the media debate that we often see is that there are hordes of people coming to the industrialized world — that's absolutely not true," Turk said.

North America has largely been shielded from the true global crisis of 68.5 million displaced persons in the world fleeing war and conflict, he said.

"I think it's important to put everything in perspective and to bear in mind that when people talk about a 'crisis' these days, these crises are far away from North America or from Europe, they are taking place often in the poorest countries in the world who need our support, need our solidarity and who need also our humanity."

Political rhetoric whipping up public concern over the asylum-seekers has been rising in recent weeks, led by politicians in both Canada and the United States.

In Canada, the federal Conservatives regularly refer to the influx of tens of thousands of asylum seekers crossing "irregularly" into Canada via non-official entry points from the U.S. as a border crisis and have used the issue to galvanize their base and criticize the Liberal government.

In the U.S., President Donald Trump has spoken more and more harshly on the issue of "illegal aliens" as he continues to push for a wall across his country's border with Mexico. In the lead-up to the American midterm elections this week, he was especially aggressive on the migrant caravan: he said its participants are part of an invasion and has deployed the military to the border.

Nevertheless, Turk said, the U.S. continues to have a "robust" asylum system with checks and balances.

Turk said 90 per cent of the world's refugees who cross international borders do so far away from both Canada and the United States.

"I think it is important never to lose sight of what we face globally today. The real crises in this world are in the Ugandas of this world, are in Turkey, are in Jordan, are in Lebanon, are in Ethiopia, are in Pakistan and Iran, where countries host literally millions of refugees year in and year out," he said.

Canada has indeed been cognizant of this and has been closely monitoring the rise in migration patterns, particularly in the Americas, according to government documents obtained under access-to-information law.

Officials within the International Trade Department have raised concerns about this, notably over how the Trump administration's "hard-line rhetoric" could lead to an influx of irregular migrants from Central America into Canada.

Trump has moved to end temporary protected status for hundreds of thousands of foreign nationals living in the U.S. and has vowed to kill the Deferred Action for Childhood Arrivals (DACA) program for people who grew up in the U.S. after their parents brought them illegally as minors.

Canadian officials noted in a September 2017 briefing document that two-thirds of America's DACA beneficiaries are Mexican nationals, and warned that if a lot of them decided to come to Canada, it would place tremendous pressure on Canada's asylum system.

Canada has been working with Turk's agency to help Mexico build its capacity to handle asylum claims from Central Americans. The work has included training provided by Canadian immigration officials to their Mexican counterparts on assessing refugee claims and protecting claimants.

"Mexico traditionally has been a country of transit, so many people did not apply for asylum," he said. "Even in the last couple of days we have seen an increase in asylum applications (in Mexico), so it's obvious that Mexico needs support both when it comes to the asylum system as well as when it comes to helping them integrate refugees."