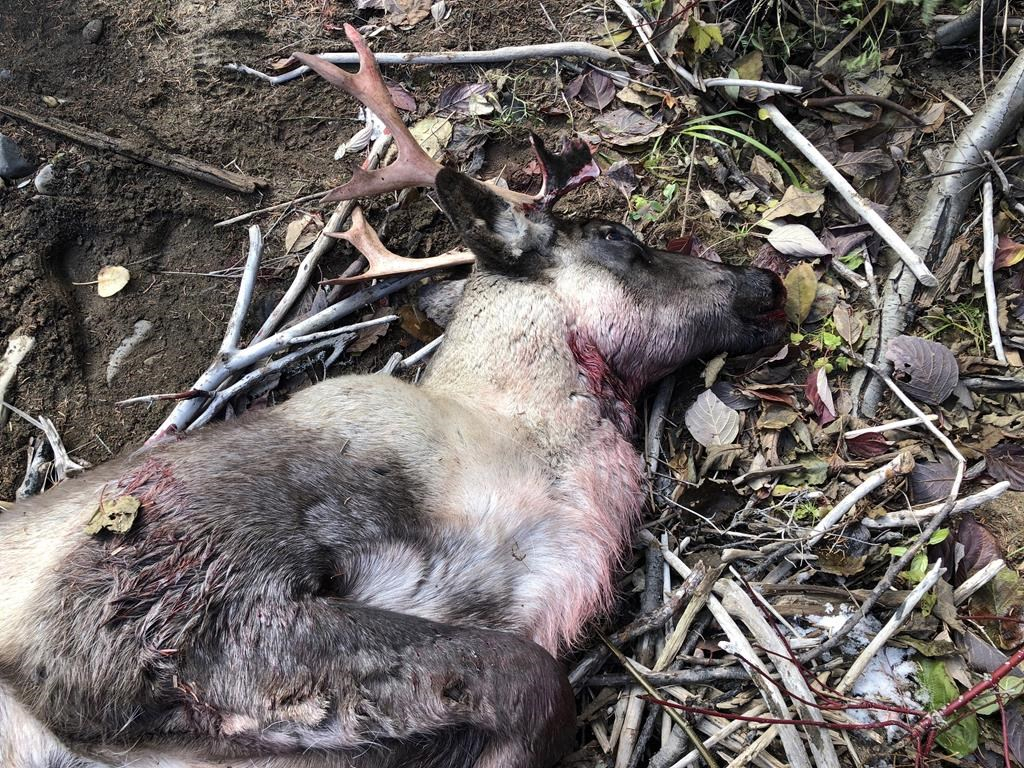 A caribou that was found dead on Oct.26, 2018 in Quebec's Gaspesie region is shown in a handout photo from the province's wildlife and fisheries ministry. Handout photo by The Quebec Wildlife and Fisheries
Previous story

Wildlife officials in Quebec appealed to the public this week as they probed the suspected poaching death of an endangered caribou on the province's Gaspe peninsula.

A citizen discovered the remains near the Cascapedia River on Oct 26. and alerted wildlife officials, who arrived two days later, Montpetit said.

Upon arrival, they found an animal that was gutted but otherwise mostly intact, with neither its antlers nor its hide removed.

"Were the suspects disturbed in their actions?" Montpetit said in a phone interview. "That's the question we're asking."

It is forbidden to hunt Gaspe's woodland caribou, which have been listed on the province's threatened species list since 2009.

An aerial survey of the animals conducted last year pegged its population at 75.

Their low numbers are explained mainly by high mortality due to predation, habitat loss and a shortage of breeding adults, according to a government report published last year.

Montpetit said anyone who is charged with deliberately killing the protected species could face a fine of up to $20,000.

But for the moment, investigators are in the dark about the culprit's motives.

"Was it a mistake? An accidental slaughter?" Montpetit asked. "As we speak, there could be many possibilities, and it's all speculation."

The department posted photos and a description online this week, encouraging witnesses to contact their local Wildlife Department office or to leave an anonymous tip on the government's anti-poaching line.

Montpetit declined to say whether the investigation has yielded any useful clues.

"That's a good question," he said, "but I'm keeping that to myself for the moment."

Alain Poitras, the president of the regional chapter of the provincial hunting and fishing association, said it is the first time he has heard of one of the endangered animals being poached in his 15 years with the organization.

He said hunters "are really not happy" about the news, noting the organization has worked with the Quebec government on preservation efforts.

Poitras said it is possible a hunter mistook the caribou for a deer, but that would be unusual given where the carcass was found.

"What we find odd is that the area where the poaching occurred, there normally aren't any deer around there," he said. "It's a moose area, not a deer area." And he said no hunter would mistake a caribou for a moose.

Poitras said responsible hunters are opposed to poaching, and he's encouraging anyone, hunter or not, to report any suspicious activity in the area.

Mountain caribou from U.S. are being sent to British Columbia