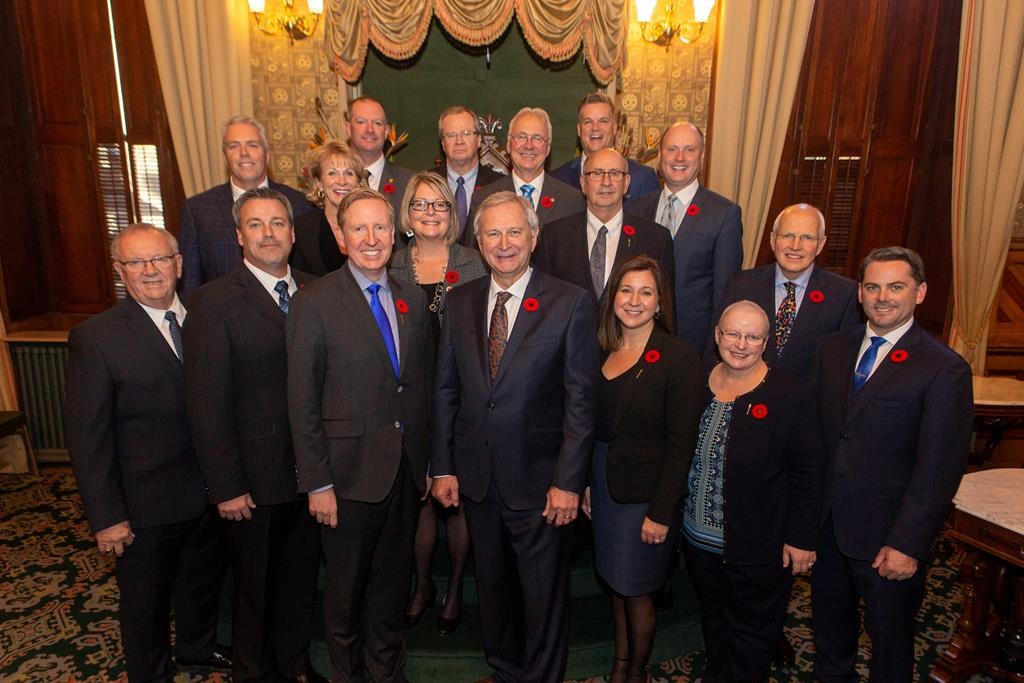 New Brunswick Premier Blaine Higgs, centre, is seen with the members of Executive Council at the New Brunswick Legislature in Fredericton on Friday, Nov. 9, 2018. Photo by The Canadian Press/James West
Previous story

"Today it has been entrusted upon us for the next chapter in New Brunswick's story," Premier Blaine Higgs said after being sworn-in as the province's 34th premier.

The ceremony, in the provincial legislature Friday, came just a week after the Liberal government of Brian Gallant was defeated on a confidence vote.

At the age of 64, Higgs is the oldest person to assume the job of premier in a province with a history of choosing young leaders.

Higgs thanked friends, family and supporters, and asked for the help of all New Brunswickers to fix the problems facing the province.

"I humbly ask each and every one of you to help me in meeting that responsibility. This cannot be accomplished alone," he said.

Higgs named a cabinet of 17 ministers, including himself.

Robert Gauvin, the Tories' lone member in northern New Brunswick, has been named deputy premier and minister of Tourism, Culture and Heritage.

The entertainer and playwright said while he's a francophone from the north, he looks forward to working with people from across the province.

"We'll have to roll up our sleeves and talk to each other, find ways to respect each other, and get the job done," he said.

There are four women in cabinet, including rookie Andrea Anderson-Mason, who becomes minister of Justice and Attorney General.

Ted Flemming returns to cabinet as minister of Health — a position he held under the former government of then-premier David Alward.

Flemming said he'll work quickly to help find a solution to the paramedic shortage that has impacted ambulance service in the province.

"I'm going to study the situation, and we're going to move forward, and you're not going to have to wait around a long time," Flemming said.

On Friday, Higgs repeated a pledge to find a solution in a week, saying he'll be able to make an announcement by next Friday.

At the age of 71, former member of Parliament Greg Thompson has been named minister of Intergovernmental Affairs.

Dominic Cardy, the province's former NDP leader who ran for the Tories in September's election, was named minister of Education and Early Childhood Development.

Higgs issued a challenge to the new cabinet ministers.

"You are the first new cabinet of a new era in government — a new era that will bring change for our province — positive change that will get us on the road to recovery, one where collaboration is more important than winning an argument," he said.

The three members of the People's Alliance party have committed to supporting the Tory government on votes of confidence for at least 18 months, but have not signed any formal agreement with them.

People's Alliance Leader Kris Austin said Friday he thought the choices for the Tory cabinet were good and he looked forward to working with them.

It won't be difficult for Austin's members to meet with Tory members — the new seating arrangement has them on the government side of the house, while the Green members will sit on the other side of the house with the Liberals.

Gallant, meanwhile, says he hasn't yet decided if he'll stay on to lead his Liberal party.

"All of these words of encouragement are perhaps what's making (my wife) Karine and I think long and hard about exactly how we wish to contribute to the province going forward."

However, Gallant said he won't let the decision process drag on, and will announce his intentions soon.

"I do think I can be an effective leader of the Opposition. I really do think we could continue some of the momentum we started if ever we were given the chance to govern again," he said.

Gallant said if he was to quit as leader, he would remain as MLA for his riding of Shediac Bay-Dieppe.

He has close ties with a number of key players in the federal Liberal party, including his friend, Dominic LeBlanc, the minister of Intergovernmental Affairs, Northern Affairs and Internal Trade - but Gallant said he has no intentions to make a run at federal politics in next year's election.

The new Tory government is expected to deliver a throne speech on Nov. 20.

Higgs said he'll present a short list of priorities rather than a long shopping list of promises.

New Brunswick Tories pressing ahead with preparations for government:Higgs