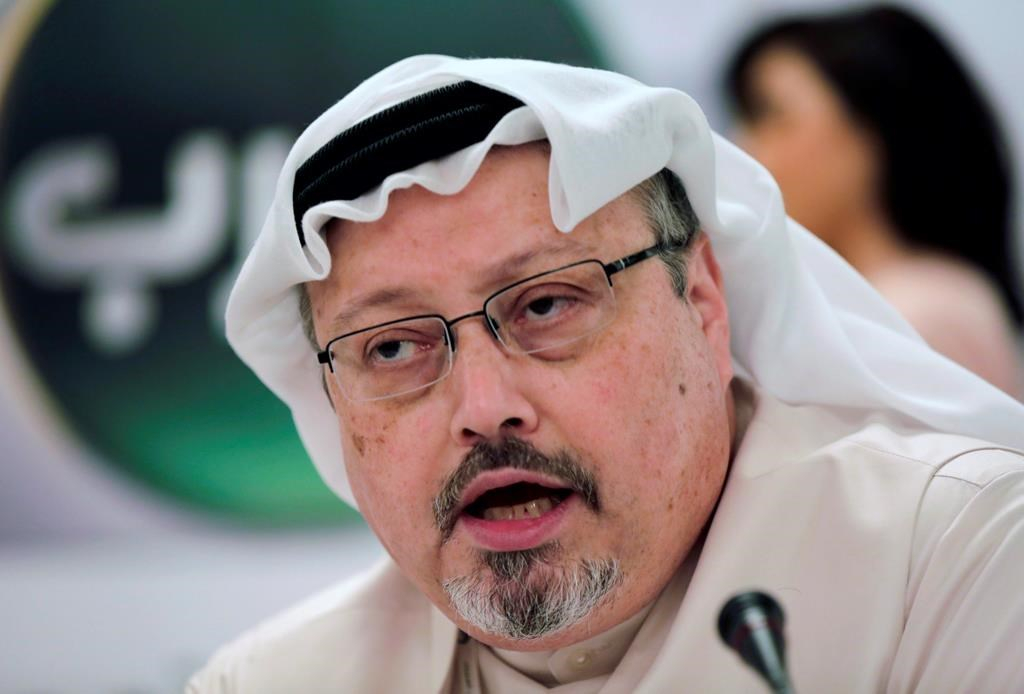 The Canadian government is showing no signs of toughening its stance on arms sales to Saudi Arabia, even after Canada's spy chief heard a recording of the killing of journalist Jamal Khashoggi.

When asked Tuesday how Canada intends to proceed from here, Foreign Affairs Minister Chrystia Freeland reiterated Ottawa's position that no new weapons-export permits will be signed for Saudi Arabia for now.

"We are reviewing our arms sales to Saudi Arabia in view of this killing and, obviously, during this period of review no new arms export permits will be signed," Freeland said in Windsor, Ont.

That's no different from what Canada's been saying for weeks.

CSIS director David Vigneault recently travelled to Turkey to listen to the recording Turkish authorities have of Khashoggi's killing and briefed Prime Minister Justin Trudeau as well as other top officials upon his return.

"Canada is very clear that those who are responsible for this atrocious murder must bear full responsibility for that," Freeland said when asked how hearing the recording affects the government's position.

His killing — which brought international condemnation of Riyadh — also renewed public outrage in Canada over Ottawa's controversial $15-billion deal to sell light armoured vehicles to the kingdom. Ottawa has come under pressure to cancel the armoured-vehicles contract, but Trudeau has said the penalty for doing so would be "in the billions of dollars."

Freeland said she spoke with Turkish Foreign Minister Mevlut Cavusoglu on Monday to press for a credible, transparent investigation into the Khashoggi case.

Under intensifying pressure, Riyadh has changed its story about Khashoggi's death, first saying he walked out of the consulate the day he disappeared but eventually acknowledging he was killed inside the building. Saudi Arabia has also recently acknowledged Turkish evidence that showed the slaying was premeditated.

"The explanations which have been offered thus far by Saudi Arabia lack credibility and consistency," Freeland said Tuesday after meeting with union members in Windsor.

"The killing of Jamal Khashoggi is a truly horrific crime. We are obviously worried about the killing of any human being, but it is particularly worrying to us because this is yet another example of the ability of journalists to do their job being curtailed."

Trudeau has also condemned the killing, but when asked about the recording earlier this week he offered no clues about how it might have affected his thoughts on the matter.

Trudeau Liberal's, in spite of constantly blaming Harper for all of our woes seem to stand pat on many Harper policies. Oil and gas exploration, marketing and sales is another.

I find it a disgrace to put

I find it a disgrace to put money ahead of the horror of what Saudi Arabi did. He has gone too far. Stop our sales