Canada's Olympic and Paralympic committees disappointed, but respectful of vote 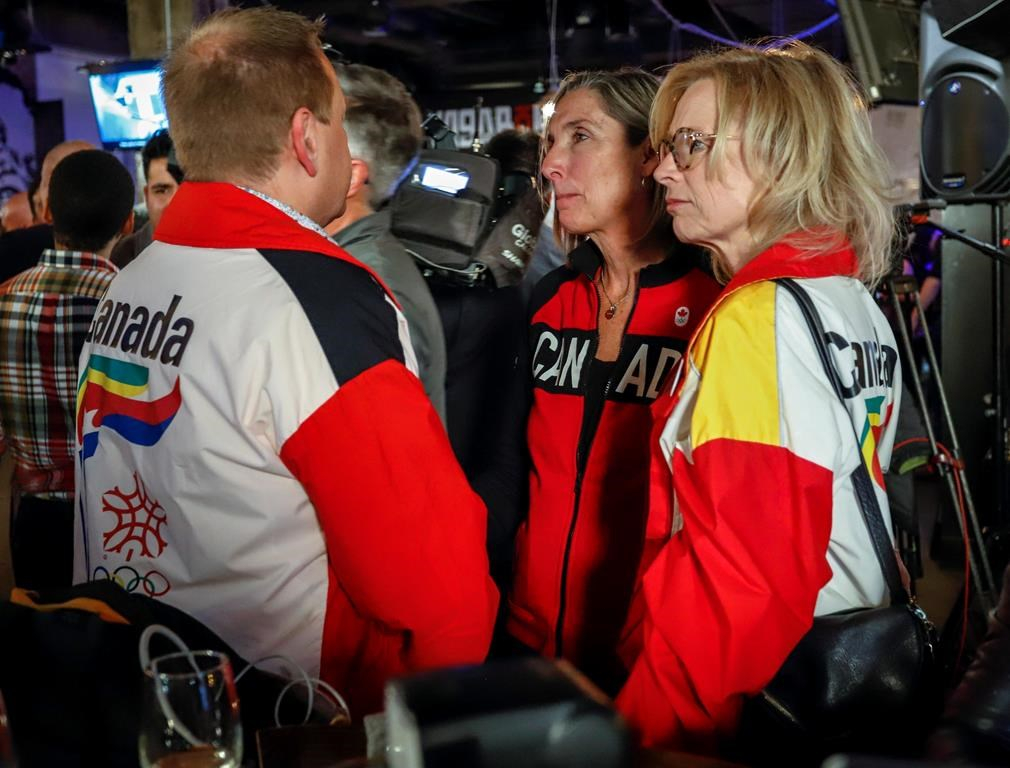 Dave King, Linda King, son and daughter of Frank King react to the results of a plebiscite on whether the city should proceed with a bid for the 2026 Winter Olympics, in Calgary, Alta., on Nov. 13, 2018. Photo by The Canadian Press/Jeff McIntosh
Previous story

Gripped by disappointment after Calgary's 2026 plans were seemingly snuffed after a plebiscite, Canadian Olympic Committee president Tricia Smith remains hopeful that the country will still host the Games in the future.

"Sport in a positive sense really brings a country together," Smith said Wednesday morning. "I think it's just a part of us, our humanity. So I suspect we will see another bid from Canada."

Smith took a red-eye flight back to Toronto after trying to drum up support in Calgary on Tuesday. However, a majority of voters said 'no' to a potential Calgary bid for the 2026 Winter Olympics and Paralympic Games with 56.4 per cent of those who went to the polls casting a dissenting vote.

"This was an opportunity for Calgary to really sort of lead the way and show how it could be done, but we have to respect the process and respect the result of the vote," Smith told The Canadian Press.

The group representing Canada's Paralympic athletes also said it was disappointed, but respected the decision.

CPC president Marc-Andre Fabien said a home Games would have "united the nation" and energized people across the country. In a statement, he said he's pleased "the people of Calgary had the opportunity to share their voice."

City council has the final say on whether Calgary proceeds with a bid years after the city hosted the 1988 Winter Olympics.

The results won't be declared official until Friday, with council expected to address the results Monday.

"I have to say that 98 per cent of the people I spoke with were very positive about the bid and said they were on their way to vote," she said. "So I think the momentum had changed. It was a matter of getting information out there. I think there's a lot of people in Calgary that still see the varied benefits of the Games.

"What I heard a few people say is, 'Well maybe it's not the time for us right now, we've got a lot of issues right now that maybe we should be dealing with first.'"

Vancouver hosted the Winter Olympics in 2010.

"I'm from Vancouver and I lived through that Games and was part of that process," she said. "It was just so positive for the country and it really changed us a nation. Certainly even just building off the '88 legacy, the athletes in 2010 just put us on the map in terms of being one of the top winter sport nations.

"I think it made a big difference to the way we see ourselves as a nation."

The International Olympic Committee invited Calgary, Stockholm and a joint Italian bid from Milan and Cortina d'Ampezzo to be candidate cities for 2026.

The IOC will accept bids in early January and the election of the host city is set to be finalized in June.

Pyeongchang, South Korea served as host of the 2018 Winter Games. Beijing will host in 2022.

— Lauren Krugel contributed to this story.

Calgarians vote 'no' on 2026 Olympic bid in non-binding plebiscite