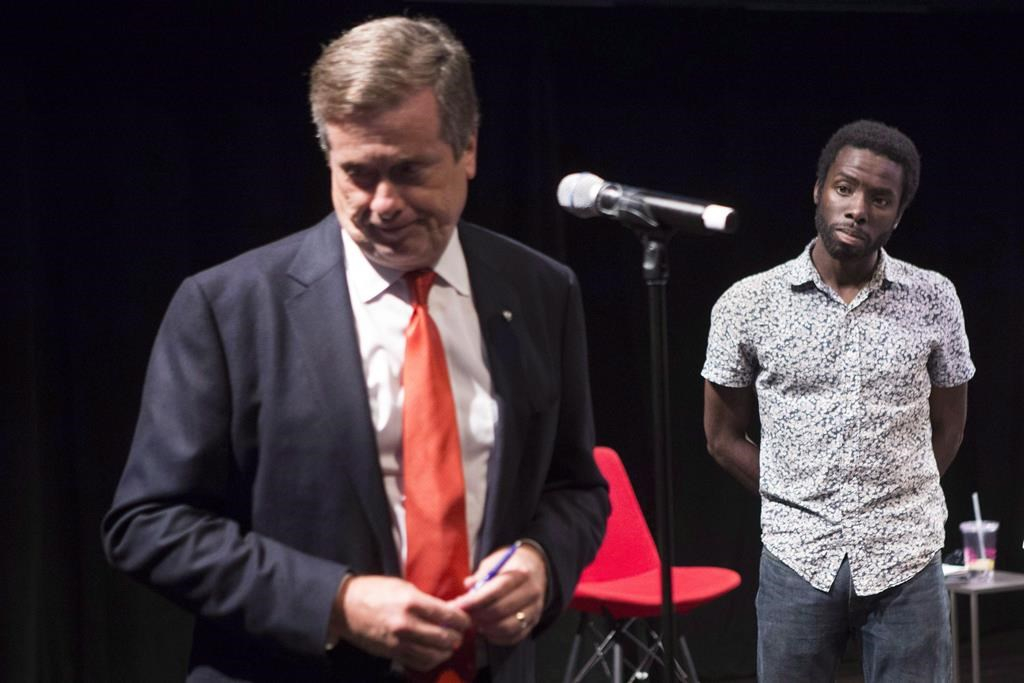 Toronto Mayor John Tory addresses the crowd after being called to the microphone by activist and writer Desmond Cole (right) at an anti-racism meeting in Toronto on Thursday, July 14, 2016. File photo by The Canadian Press/Chris Young
Previous story

A Toronto activist and writer who was stopped by Vancouver police a day after arriving in the city says his experience reveals what daily life is like for black and Indigenous residents.

Desmond Cole has worked for years to end street checks or "carding" in Toronto and says he was the subject of a street check by a Vancouver police officer on Tuesday.

Street checks involve officers stopping a person and recording their information, regardless of whether an offence has been committed. Opponents say street checks disproportionately target people of colour.

"I get to leave Vancouver this weekend, but people have to live here every day. That’s what I really want people to sit with," said Cole in an interview Wednesday.

"If this is what happened to me, what is everyday life like for vulnerable residents in the city of Vancouver and in this province? That's the question people have to ask themselves."

The British Columbia Civil Liberties Association and Union of B.C. Indian Chiefs have filed a complaint with the Office of the Police Complaint Commissioner calling for an independent review of the practice.

Police in the city conducted an internal review and released a report that says there was "no statistical basis" to conclude officers use the checks to discriminate against certain races.

Cole is visiting Vancouver to deliver a speech on racial inequality at a Canadian Centre for Policy Alternatives fundraiser. After the interaction with police on Tuesday afternoon, he posted a video of himself discussing the incident on Twitter.

In the video, he said he was smoking a cigarette on a sidewalk near Stanley Park when a police cruiser passed, pulled a U-Turn and stopped next to him. The officer told him he was breaking a bylaw against smoking in parks, Cole said.

Cole said he replied that he was not in a park and wasn't from the city. He refused the officer's repeated requests to give his name or show identification. He said the officer threatened to arrest him, but after about 15 minutes he left without issuing a ticket.

Cole said as the officer drove away, he said: "I'll be seeing you around again."

In the interview, Cole said the officer also asked several times whether there were any warrants out for his arrest.

The Charter of Rights and Freedoms protects Canadians from unlawful search, seizure and detainment by police, he said.

"I could have just given the police officer whatever he asked for. But I don't want to live in a police state. I actually want the laws that are on the books in this country to apply to me just as they’re supposed to apply to everybody else," Cole said.

Vancouver police issued a statement saying a street check was not conducted and no information was recorded. The officer approached Cole because he was smoking on the south side of the park, but chose not to serve a ticket, Const. Jason Doucette said.

"Our officers work through difficult situations every day and a key component of maintaining public safety is interacting with the public. VPD officers carry out their duties with integrity, compassion and respect and are accountable for their actions."

Cole said police appear to have classified the incident as not being a street check because no information was recorded, although in his case he refused to provide any.

After the incident, Cole said he visited the police station and a sergeant later met him to discuss the encounter at a cafe where he was meeting to discuss carding with Josh Paterson, director of the civil liberties association.

Cole said he decided not to file a formal complaint because he doesn't have faith in the ability of police to investigate themselves, and the civil liberties association complaint to the police complaint commissioner has already raised the issue.

Paterson said his group's complaint also covers police stops where no information is recorded into the database.

He said he was saddened, though not surprised, by Cole's experience.

"It's a really stark example of what we're talking about, in terms of arbitrary police stops where race is a factor."