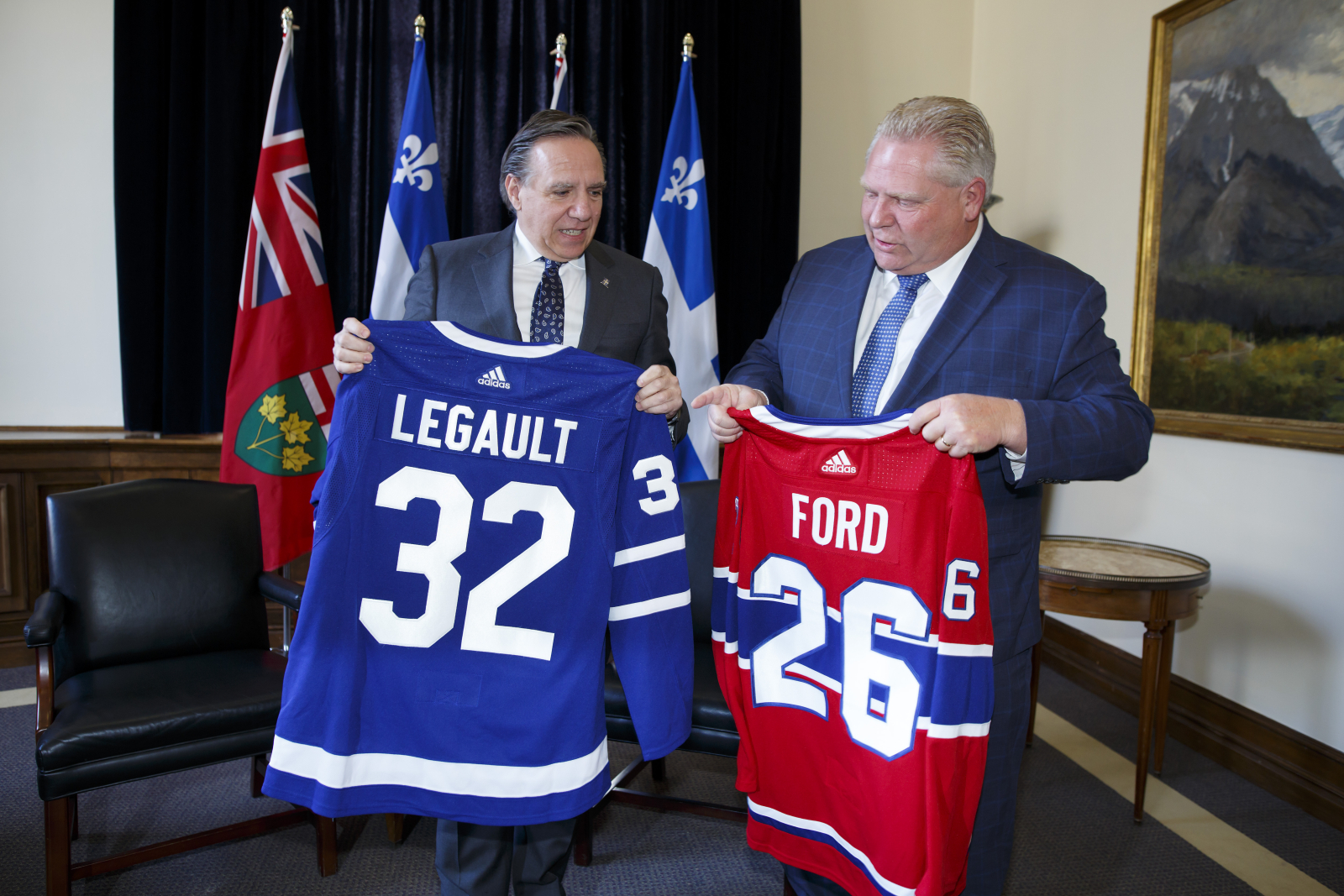 Quebec Premier François Legault and Ontario Premier Doug Ford exchange hockey jerseys of the Montreal Canadiens and the Toronto Maple Leafs prior to meeting in Toronto on Nov. 19, 2018. Photo by Cole Burston
Previous story
Next story

A meeting about expanding trade between Canada's two most populous provinces appeared to be overshadowed by language issues on Monday, with the premiers at odds over support for the French language in Ontario.

Quebec Premier François Legault left the meeting in Toronto telling reporters that he still saw economic opportunities between the two central Canadian provinces, but that he wasn't satisfied with Ontario Premier Doug Ford's recent explanations about cuts to French-language services.

The meeting was the first face-to-face chat between the two premiers, both former businessmen who led their right-leaning parties to power following elections in 2018.

The discussion came a few days after Ford's government, elected in June, announced in an economic update that it would be canceling plans for a francophone university in Ontario and pushing the position of a commissioner mandated to ensure government services are available in French, as per federal law, into a general ombudsman's office.

The issue has provoked harsh criticism from the predominantly French-speaking province of Quebec, as well as from minority francophone communities in Ontario and the rest of the country. About 600,000 francophones live in Ontario, which has a population of over 14 million.

Over the weekend, French-language media outlet #ONfr and the English-language daily, the Ottawa Citizen, reported that Ford was fielding phone calls from Franco-Ontarians and defending his government's decisions, by saying that there wasn't enough money to deliver the services being cut.

Ford told them in the calls that there were also about 600,000 Chinese Ontarians and 600,000 Italian Ontarians, but that the "province couldn't please everybody," the Citizen reported on Nov. 17.

Those comments drew a rebuke from Legault, who said governments have a duty to provide services such as education and healthcare in both of Canada's official languages.

“I made it clear to Mr. Ford that I didn’t like that francophones were being compared to Chinese or other cultures," he said. "I told him that we are one of the two founding peoples of Canada, so we have to expect services to be delivered." ​​

“I made it clear to Mr. Ford that I didn’t like that francophones were being compared to Chinese or other cultures," Quebec Premier François Legault said, following a meeting with the Ontario premier #cdnpoli #OfficialLanguages #onpoli #qcpoli

Legault, a former airline executive who ended almost 50 years of Liberal and Parti Québécois dominance in Quebec when the head of the right-leaning Coalition Avenir was sworn in last month, said he asked Ford to reconsider his position, but that the Ontario premier disagreed.

“I don’t think it sends a good message to francophones, but it is not my decision,” he told reporters after the meeting, adding that he expects the federal government to help ensure the French language is protected.

Legault pointed out that while Ontario does not currently have a French-language university, Quebec has three English-languages ones and a major hospital in Montreal dedicated to serving anglophones.

He added that the two leaders also discussed a plan to increase the value of trade between the provinces to $50 billion a year in each directly, from around $40 billion currently, as a way to reduce their dependence on a "very protectionist United States."

Legault cited the aeronautical industry as one example of where Ontario could reduce U.S. imports and instead choose to import more from Quebec.

He said he offered to sell hydroelectricity to Ontario at less than it would cost to refurbish an aging nuclear power plant and, given Ford's focus on creating jobs, noted that any plan to build new dams in Quebec would include jobs for some Ontario workers.

Before the meeting Ford said he expected the two to have "great conversations" because they both understand how to run a business and both want to protect their provinces' dairy farmers following the new trade deal between the United States, Canada and Mexico.

The two premiers also exchanged hockey gifts with Ford taking a Montreal Canadiens jersey from Legault, who accepted Toronto Maple Leafs jersey, while lightheartedly reminding the Ontario premier that the Quebec team had the most Stanley Cup championships.

Legault also joked about the Toronto Maple Leafs hockey team finally having a roster able to compete with the Montreal Canadiens.

Ford also said he would like to improve interprovincial trade and work together to deal with illegal border crossings.

“We invite everyone to our country, but again, they have to stay in the line. The federal government owes our province $200 million. We can’t handle the infrastructure needed, the housing, so hopefully we can find common ground on that because Quebec and Ontario are bearing the brunt of that," he said during a brief photo opportunity inside his Queen's Park office.

Speaking to reporters after the meeting, Ford said that he had noted during the discussion that Legault had inherited a $1 billion surplus, while the Progressive Conservative government in Ontario had inherited a $15 billion structural deficit. Ford also said that Ontario was scaling back expansion plans for three English-language universities.

The Ford government also released a statement that said the two provincial leaders agreed that the federal government should compensate for the cost of dealing with illegal crossings by migrants.

Caroline Mulroney, the attorney general and minister for francophone affairs, told reporters that the move to incorporate the francophone commissioner into the ombudsman's office does not limit the importance of the role but would create efficiencies.

"We are not canceling it, we are integrating it into the ombudsman's office in its entirety," she said, declining to say how much money would be saved by the move.

"There will be economies of scale from just backroom, administrative work. That's what we were elected to do," she said, adding that there would be "obvious savings" after ballooning budgets in the past.

John Fraser, the interim leader of the Ontario Liberal party who fell out of power and lost official party status in the June election, disagreed with the idea of prior largesse and questioned the Ford government's motives.

"If there is a savings that's there, the savings that they're realizing is not commensurate with the damage they are doing," he said, in reference to curtailing the francophone commissioner as well as commissioners for vulnerable children and the environment.

"There's no question in my mind, this is about silencing critics, about avoiding transparency," he said.

Mulroney meanwhile sought to downplay the resolution passed at the party’s weekend policy conference to consider whether gender identity should be recognized, saying it would not be considered until next year and “has nothing to do with today’s government policy.”

Asked if it is legitimate to debate the existence of gender identity, Mulroney said that “at a convention every member has a right to have their voice heard” and that the government wanted to talk about “a safe and supportive classroom for every student.”

Mike Schreiner, the leader of the Green Party of Ontario, said he hoped Ontario would accept the deal for more low-cost hydroelectric power rather than spending to upgrade a nuclear power plant, and slammed the lack of Conservative opposition to the conference proposal, brought by former leadership contender Tanya Granic Allen.

“Trans rights are human rights. It is dangerous and irresponsible for any party, especially one with a majority government, to pass a resolution endorsing discrimination against anyone and telling people how to identify themselves," he said.

Premier Ford was left with a