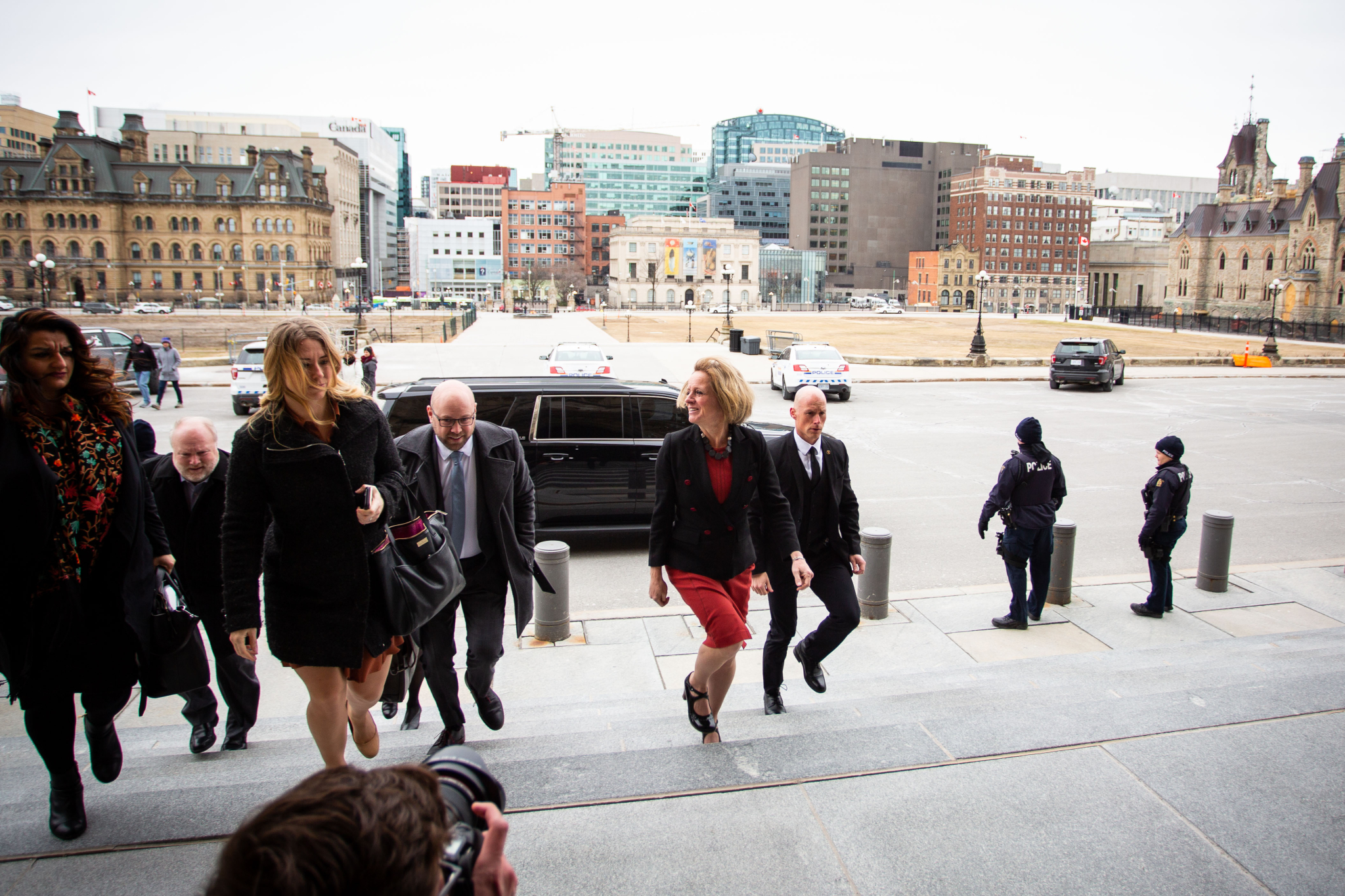 Alberta Premier Rachel Notley met Prime Minister Justin Trudeau and B.C. Premier John Horgan in Ottawa on April 15, 2018 to discuss the Trans Mountain pipeline expansion. She is expected to be back in Ottawa in November 2018. Photo by Alex Tétreault
Previous story
Next story

“The system right from the very outset allows for exemptions in trade-exposed sectors … to ensure that they could remain competitive while at the same time bringing in an incentive to have them reduce their emissions,” Notley told reporters in Calgary. “So we’re striking the right balance.”

The premier made the announcement while speaking to the Canadian Association of Oilwell Drilling Contractors at the Petroleum Club.

Companies in the drilling sector were already exempted from paying an Alberta carbon levy on fuels necessary for on-site drilling. Thursday’s announcement expands what fuels are recognized as necessary for oil and gas development, taking in clear fuels too, and provides for a rebate on carbon taxes paid on clear fuels since January 2017.

Notley said the estimated annual cost of the change will be $1.5 million.

She told reporters that the change puts those in the drilling sector on equal footing with other kinds of work already exempted, and noted there are also rebates in place for individual consumers.

The ‘fight of our lives’

“I know many pipeline opponents don’t want to hear this, it’s not what they wished for, but I guess you have to be careful what you wish for,” Notley said.

“I am also asking the federal government to prioritize the shipment of crude by rail after grain until new pipelines are built. The bottom line: Ottawa needs to join Alberta to help ease the economic pain that Alberta played no part in causing, but in fact the same pain that is affecting the wellbeing of this entire province and quite frankly this entire country.”

Currently, Alberta oil fetches less money when shipped through the United States. Notley pegged that differential, or loss to the economy, at $80 million a day on Thursday. The proposed Trans Mountain pipeline expansion – now owned by the federal government – would allow Alberta oil to reach international markets.

In Calgary Thursday to meet with the Chamber of Commerce and oil and gas executives, Trudeau said he knows Albertans are worried. "This is a very difficult context right now with the (oil price) differential being where it is, piled on top of years of struggling with low oil prices."

While both levels of government have discussed problems facing the oil industry, there has been little discussion of the oilpatch's financial liabilities and possible solutions despite the recent revelation Alberta taxpayers could be on the hook for as much as $260 billion in cleanup costs.

Notley called oil, “the natural inheritance of each and every Albertan,” and said it will find its way to market, even if that means Alberta will need to buy trains to make it happen.

Meantime the effort to expand upgrading in the province is meant to add value to Alberta’s oil and foster new jobs. Together, the six projects could lead to 10,000 construction jobs and about 500 jobs in operations.

“Every Albertan knows that once those resources come out of the ground, we can do more,” Notley said. “We must take more control of our economic destiny. We are not a branch plant for the U.S. economy.”

If you’ve made it this far, you must care about in-depth and responsible journalism. How about supporting more articles like this one: Get 60% off during our Black Friday sale for access to Canada’s top investigations on energy, climate, the environment and more. If you’re already a subscriber, please consider gifting a subscription, just in time for the holiday season.

I would suggest the "Paris

I would suggest the "Paris Climate Summit Document" is null and void. Of course taxpayers will continue to be on the hook.

We definitely know who owns

We definitely know who owns all of Alberta- especially the government.

Yes Rachel, be careful what

Yes Rachel, be careful what you wish for. Canada has decided to use renewable energies. Every kilowatt of renewable energy used means fewer barrels of tar sands oil. So there is absolutely no reason to build an extended Trans Mountain pipeline. In fact, I have heard that the capacity of the current Trans Mountain pipeline is underused (50%). There shall be be no expansion Rachel.

Rachel, you want Canadians to

Rachel, you want Canadians to subsidize Multinational BIG Oil and Gas companies further by buying Railcars? This on top of the $3.3 BILLION they receive annually? Any word yet from the same Big Oil how they'll help Alberta with the $260 BILLION Cleanup bill for the Alberta TAR Tailings mess?

Not all of Canada's U.S. exports are subject to heavy discounts. U.S. heavy-oil refineries on the Gulf Coast are paying top dollar for AB dilbit, just below the WTI price.
Keystone XL will largely solve AB's problem.

"Roughly 80% of Suncor Energy Inc.’s bitumen production is fully insulated from the differentials, spokesperson Erin Rees said in an email.
"'And the other 20% is only potentially exposed due to the work of our marketing team, our significant midstream capacity and a vast logistics network we can leverage and for operational purposes,' she said.
"Husky Energy Inc. spokesperson Mel Duvall said his company owns more refining capacity than it can fill up with its own production, and is not negatively affected by WCS/WTI differentials."
• business [dot] financialpost [dot] com/commodities/oilpatch-scrambles-to-ship-distressed-barrels-as-industry-loses-100m-in-revenues-daily

"During AB’s so-called bitumen crisis, the 3 top oilsands producers — Suncor, Husky and Imperial Oil — are posting record profits. All 3 firms have succeeded this year because they own upgraders and refineries in Canada or the U.S. Midwest that can process the cheap bitumen or heavy oil into higher value petroleum products."
• thetyee [dot] ca/Analysis/2018/11/23/Alberta-Policy-Problems/

With the highest concentration of heavy-oil refineries in the world, the U.S. remains our best customer. AB oil reaches tidewater at the Gulf of Mexico (as well as the port of Vancouver). Overseas shipments of AB heavy oil remain few and far between.
When big U.S. mid-West refineries get back online after maintenance, and Keystone XL and Enbridge's Line 3 start up, the discount is expected to return to normal levels. (But watch out for IMO 2020.)

Some explanation about "clear fuels" might be useful to readers not in the drilling business.