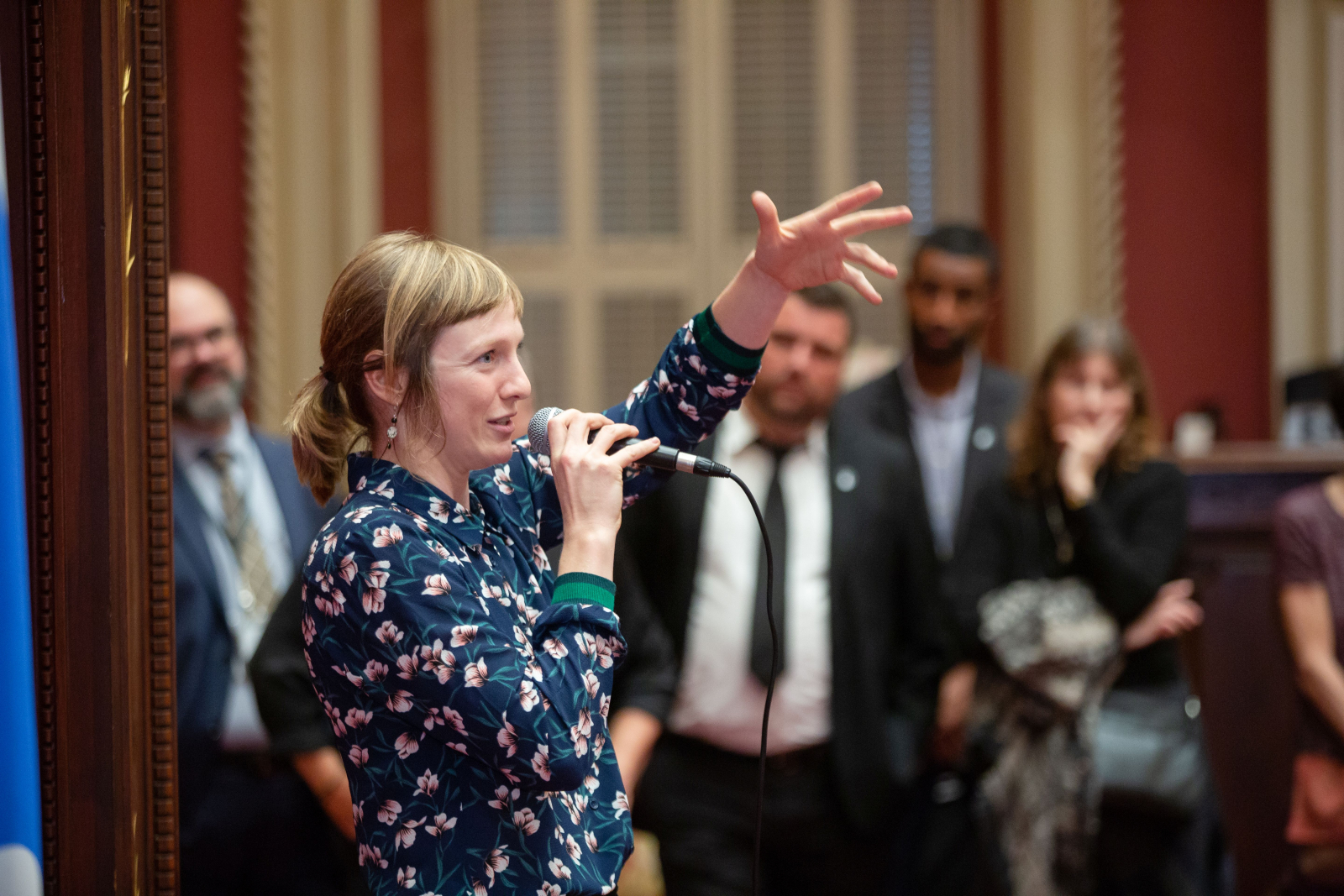 Québec Solidaire legislator Catherine Dorion, who represents the riding of Taschereau, at a ceremony at the National Assembly in Quebec City on Oct. 17, 2018. Photo handout
Previous story
Next story

The Internet blew up this week after Eddie Scarry posted a photo of the backside of Alexandria Ocasio-Cortez and wondered aloud: is she wearing the kind of outfit that someone who is low income would wear?

To the untrained eye (mine), the photo doesn’t portray what Scarry, a conservative writer for the Washington Examiner, suggests it does. With no visible Swarovski crystals or LED lights that spell Viva la revolución, the jacket looks like a jacket. While Scarry has been properly dragged online for his tweet, the controversy for him is win-win: sexism and classism sells, and his tweet has brought him a lot of attention. (He’s hawking a new book.)

Ocasio-Cortez is the youngest woman ever elected to the U.S. Congress. She ousted an establishment Democrat to win the nomination in a New York district. She is shamelessly left wing. Her lipstick is bright. Her eyes sparkle. And, the critics have already shown that they will use any little thing to try and knock her off course.

Whether it’s Scarry, moderate Republicans, right-wing Democrats, journalists or people who oppose the politics espoused by young, radical women, the game is the same: nitpick, attack and criticize to destabilize.

The same thing is playing out in Quebec with another firebrand, Catherine Dorion. In her riding of Taschereau, Québec Solidaire went from fourth place in 2014 to victory by 8,500 votes in the provincial election in October. I volunteered on her campaign.

Oh, does @eScarry think he can delete his misogyny without an apology?

I don’t think so. You’re a journalist - readers should know your bias. pic.twitter.com/2KJuiPsUR2

Dorion’s power is embedded in her style

Immediately, the story was about her clothes. Would Dorion try to wear her toque to the National Assembly? Do Dorion’s Doc Martens make her different?

Last week, media erupted when she compared a proposed new highway to a line of coke. Called the 3e lien, the project is proposed to become the third roadway linking Quebec City with Lévis on the south shore of the St. Lawrence River.

To those who oppose the politics espoused by young, radical women, the game is the same: nitpick, attack and criticize to destabilize.

It has become a proxy for the political divide: those on the right who want to see Quebec City’s suburbs grow larger and further from the city centre, versus those on the left who argue that the city can’t handle more traffic. The 3e lien has become the primary preoccupation of right-wing politicians, notably the governing Coalition Avenir Québec.

Columnists pointed to Dorion’s lack of decorum, as they called it, for daring to talk about our collective addiction to cars. In response, Dorion made a video to elaborate her metaphor. After two minutes explaining the consensus among experts that the 3e lien is bad public policy, she says that a new highway would be as effective as using coke to party longer: “Oh, I’ll do this line of coke. I’ll be less drunk, I’ll have more energy” she says, “except, what happens? You need another line of coke!” Just as new highways always beget more highways as people move further away from their work because they think the commute won’t be so bad.

Dorion’s power is embedded in her style, the way she talks and the way she engages in politics. She embodies for the left what the right-wing has had a lock on for so long in Quebec.

Right-wing radio, especially in Quebec City, has the power to make politicians successful and to make political demands, like the 3e lien, popular. Talk radio feeds the isolation that commuters experience (Quebec City has more highway lengths per capita than anywhere else in North America), and their personalities talk like Dorion: basic, straightforward and folksy.

Dorion’s confrontation to the status quo is threatening the right-wing grip on this kind of speech. She employs the same tactics as they do, and her effective explanations become much harder to refute.

Her video was a success. A few days later came a new scandal: that Dorion drives a Subaru XV Crosstrek 2015, an SUV (except there is some debate on whether this vehicle is truly an SUV). Some journalists tried to demonstrate hypocrisy between Dorion’s 3e lien position and owning a car, or Québec Solidaire’s environmental platform. While the Crosstrek isn’t the most eco-responsible car you can buy, it’s far less polluting than a Chevrolet Tahoe 2018 SUV (8.1L per 100/km vs. 13L per 100/km).

But these details don’t actually matter, because it isn't about the car. It isn’t about hypocrisy, or good public policy. If it were, Quebec Premier François Legault would stir a similar media sensation with his formal support for an industrial project in Bécancour that will pump greenhouse gas into the atmosphere equivalent to 180,000 more cars on our roads.

The attacks on Dorion and Ocasio-Cortez are meant to inhibit their audacity and to chill their ambitions, because they both represent a radical break from the status quo. And, they’re effective. They talk to average people as average people. If they can’t be stopped on the ground, the only other option is to stop them through systemic forces, which is easy when the media establishment is conservative and easily shocked when things are done differently.

Ocasio-Cortez, like Dorion, has taken her message directly to people through video posts and updates. She has been live broadcasting her experiences on Instagram since she got involved in politics. Both women circumvent the mainstream narratives about them through personal vlogs. It’s the most effective way for both to survive the media onslaught that comes with being out-of-the-ordinary.

But, it’s not good enough. Ocasio-Cortez shouldn’t have to find ways to bypass those structures that make it difficult to be a woman in politics. Dorion shouldn’t have to endure a weekly controversy intended to get her to screw up so she can be pilloried. Until we accept difference in politics, we will never make political life as easy or comfortable for women as it is for men.

In 1989 in Ontario, a fellow theology student was criticized by her supervisor for wearing earings - he said they distracted him. In the same time period, I was criticized for not looking feminine enough. I thought things had changed, but it appears not. Nora Loreto is correct; this kind of non-support does inhibit women's audacity, and chill their ambitions - and still we hear, "What about the poor men???"

Catherine be as audacious and

Catherine be as audacious and wild as possible. That's how Trump got free publicity and was elected. The Media fall over each other getting the latest before the next guy. Good luck from I.S. in Toronto. Ricard