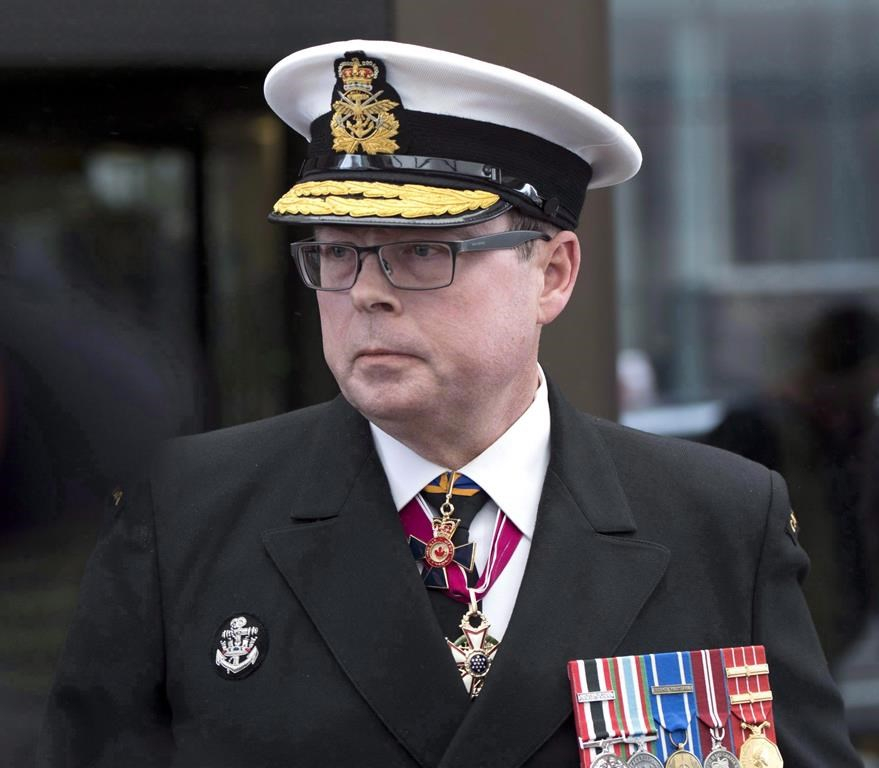 Vice-Admiral Mark Norman speaks briefly to reporters as he leaves the courthouse in Ottawa on Tuesday, April 10, 2018. File photo by The Canadian Press/Justin Tang
Previous story
Next story

Vice-Admiral Mark Norman's lawyers want to turn a senior Liberal cabinet minister's words against him in their effort to exonerate the suspended military officer, who has been charged with leaking cabinet secrets.

Court filings released Friday have Norman's lawyer repeatedly citing Treasury Board President Scott Brison's comments over the years to try to undermine his credibility and demonstrate that their client has just been caught up in high-level political games.

Suspended as the military's second-in-command in January 2017, Norman was charged with one count of breach of trust for allegedly leaking cabinet secrets to a Quebec shipyard in March. He has denied any wrongdoing and vowed to fight the charge.

Brison has been a central player in the affair.

The Nova Scotia MP has admitted to pressing to suspend a $700-million plan to build a new supply ship shortly after the Liberals took power in late 2015. The RCMP allege Norman was angry after Brison questioned the contract and then convinced a cabinet committee to pause it, so the vice-admiral leaked secrets to Quebec's Davie Shipbuilding that it could use to pressure the Liberals into restarting the project.

The 700-page court filing from Norman's defence team was released publicly on Friday. None of the material, nor the charges against Norman, has been tested in court.

The Crown had been trying to keep the documents from being released, saying the witness statements could affect the fairness of the trial, but Judge Heather Perkins-McVey disagreed.

The defence lawyers make extensive reference to RCMP interviews, emails and other documents to suggest information about the supply-ship contract leaked from all kinds of sources, before and after the critical cabinet committee meeting in November 2015.

For example, the newly released documents say a copy of secret briefing materials on the ministers' meeting were found on the computer of a lobbyist for Davie and had been sent by another civil servant days before the meeting — an apparent leak that hasn't led to charges.

Davie officials also told the RCMP that they'd been alerted to the meeting by numerous sources before it happened, and had even been asked by federal officials whether they would be open to delaying the contract pending a review.

But much of the material contained in the filings relate to Brison, who is expected to be a star witness for the Crown when the case goes to trial next August.

Brison told the House of Commons last month that he was only doing his job as Treasury Board president — whose mandate is to mind the public purse — by ensuring the ship contract represented value for taxpayers.

His spokesman reiterated that sentiment again in a note on Friday night.

"As president of the Treasury Board, Minister Brison's mandate includes expenditure review and the challenge function to ensure due diligence in government contracting," Bruce Cheadle said.

But in an interview with the RCMP in January 2016, Brison said the Treasury Board was not yet involved in the project when the cabinet committee met to discuss it in November 2015, and "this wasn't my role as ... as a member of this committee," apparently referring to his specific ministerial responsibility.

Brison has also previously denied lobbying on behalf of Halifax-based Irving Shipbuilding, which wanted the newly elected Liberals to cancel the Davie deal and hire Irving for the supply-ship job instead.

"Minister Brison's only engagement with Irving Shipbuilding or its representatives during this time was being copied on the letter sent to other ministers, to which he did not respond," Brison's spokesman Cheadle repeated Friday.

But Norman's lawyers point out that he told the RCMP that he brought a letter to the cabinet committee meeting that Irving had sent to him, Defence Minister Harjit Sajjan and then-procurement minister Judy Foote pitching its own proposal for an interim support ship.

"When I was provided with the letter I actually brought it with me to the meeting and I raised it," he said, according to the witness statement in the filings.

"I said: 'What, any thoughts on ... on this?' And I was surprised Ministers Foote, neither Minister Foote nor Sajjan had been notified that the letter had come in ... I said: 'You know, has anyone considered this?"

In an attempt to hammer home suggestions Brison was helping Irving, Norman's lawyers included separate statements from two Davie officials and the senior naval officer who oversaw the Davie project, all alleging the minister was close to Irving.

And while Brison told the RCMP that the leaking of the cabinet committee's decision to delay the Davie contract had a significant impact on the government's ability to do its due diligence on the project, others told the Mounties that wasn't the case.

Environment Minister Catherine McKenna, who chaired the cabinet committee that debated the supply-ship contract, told the RCMP in her witness statement on Jan. 15, 2016 that the government's decision to sign the contract with Davie soon after the decision to review it wasn't because of any leak.

"Some material was shared uh, with me and with members of the committee ... to reassure us or to have us better understand the process," she said. "And then I think a decision was made. We're not gonna probably get more other then the delay, and there are jobs at stake."

How will Brison's departure from government affect the Vice-Admiral's trial?