By The Canadian Press | News, Politics | November 26th 2018
#895 of 1403 articles from the Special Report: Race Against Climate Change 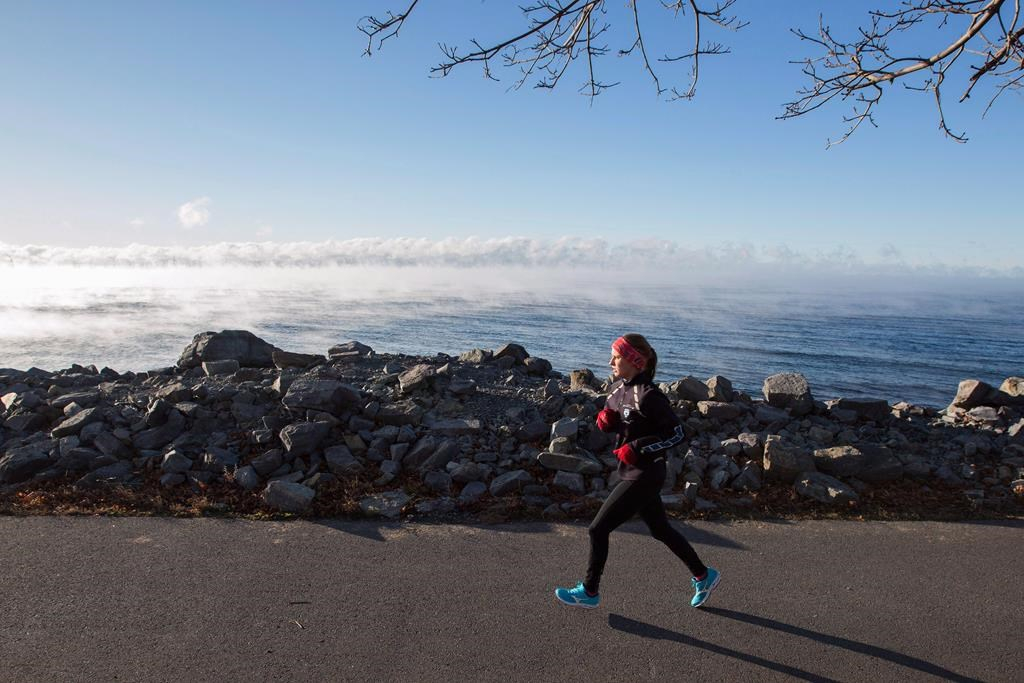 A woman runs beside Lake Ontario as cold mist rises from the lake during a winter cold snap in Kingston, Ont. on Thursday, Nov. 22, 2018. File photo by The Canadian Press/Lars Hagberg
Previous story

Canadians can expect a "mixed bag" of winter weather in the coming months, according to The Weather Network.

The network is predicting Western Canada will have warmer than normal temperatures this winter, while the eastern half of the country will experience a long-lasting and colder than normal season.

"When you look at the country in two halves, we think winter will end sooner in Western Canada ... whereas farther east, we think while it might not be harsh at all times, it does have some longevity and we're going to be begging for spring by the time we get to early March," said The Weather Network's chief meteorologist Chris Scott.

Scott said when the network makes seasonal forecasts it looks at the oceans, specifically the Pacific Ocean, which he called the "engine" that drives global weather patterns.

"This year we have El Nino.... That means warmer than normal water off the coast of South America," said Scott, adding that usually portends a milder winter.

Scott said "nobody is really getting off easy this year," but the western part of the country is the winner for people who don't like the cold.

"But if you want snow in the West, this isn't the best winter for that. If you want to get a prolonged winter it's really Central and Eastern Canada," he said.

"So that mixed bag analogy is really a perfect way to look at this."

Scott broke down the winter forecast for each region in Canada:

The network is predicting an overall long and cold winter across Canada's two most populous provinces, and Scott said the second half of the season will be especially bitter.

He said below-normal temperatures are expected for both Quebec and Ontario, but that doesn't mean every week will see frigid temperatures.

"Through December and even parts of January, this is going to be a back-and-forth kind of winter," he said.

"But we do think the back half of winter has some serious cold to it, and some longevity. That's going to make people rather weary, unfortunately, by the time we hit February and into March," said Scott.

The network is also forecasting fewer winter storms, and overall near-normal amounts of snow for the region.

Scott said the network is forecasting a mild winter for the West Coast, and significantly less snowfall than normal.

However, he said the overall dry weather pattern will break at times, with the province's South Coast region getting a closer to normal amount of precipitation.

Overall, the network is also forecasting British Columbia will get an early arrival of spring weather.

"We think if any part of the country has got an epic winter in store, it's Atlantic Canada," Scott said.

He said the region will overall get a long and stormy winter, with "significant snowfall" that will persist into spring.

Scott said above-normal amounts of snow are expected for most of Atlantic Canada, particularly the southern part of the region.

"We're expecting a roller-coaster of weather" in Manitoba, Saskatchewan and Alberta, said Scott.

The network said the region will be a "battle zone" between the mild Pacific air to the west and Arctic air to the east.

Scott said overall, the region is expected to see near-normal or below-normal snowfall.

"The region is not going to be as cold as it can be," said Scott.

The network said above-normal snowfall is expected across Yukon and into western Northwest Territories. "The rest of the North won't see any major signs of above- or below-normal precipitation," said Scott.