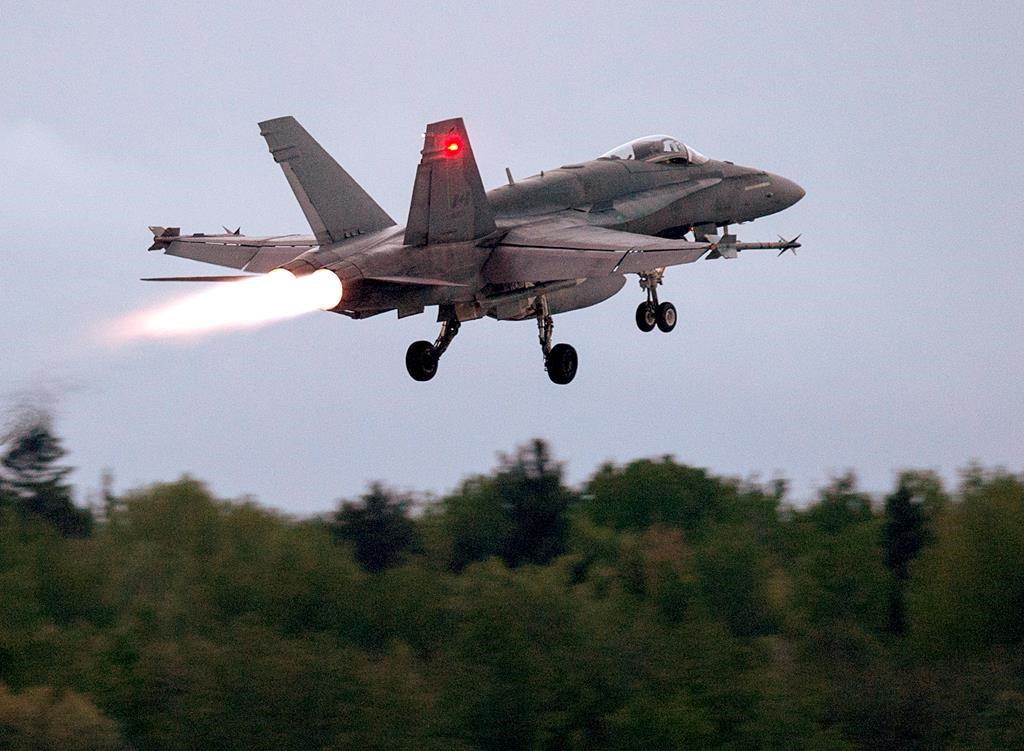 The Canadian military is looking to contract out some maintenance work on the country's aging CF-18 fighter jets as well as training to help address a shortage of experienced technicians.

Defence officials revealed the plan during a Commons committee meeting on Monday, in which they also defended the time needed to pick a new jet for the air force and faced calls to reveal how much it will cost to upgrade the CF-18s' combat systems.

The technician shortage was first revealed in an explosive auditor general's report last month in which the watchdog took aim at the Liberals' plan to buy second-hand Australian jets by warning the air force needed more technicians and pilots — not planes.

A number of measures are being introduced to address both shortfalls, air force commander Lt.-Gen. Al Meinzinger told the committee, including the contracting out of more involved maintenance that usually takes place away from the frontlines as well as some tech training.

The initiatives will free up about 200 experienced aircraft technicians so they can work directly on planes in the field and keep them flying, Meinzinger said, adding in an interview after the meeting that the move would not affect combat readiness.

Initiatives are also being introduced to better support military families, which Meinzinger identified as a key contributing factor in why many pilots and technicians are leaving, while the air force is looking at a new training model to produce more pilots.

Even with these measures, Meinzinger said he expected it to take between five and seven years to have a full complement of pilots and technicians in time to start transitioning from the CF-18s to new state-of-the-art replacements.

"We're putting our shoulder to the wheel," Meinzinger told The Canadian Press. "This is a top priority. … But it's going to take some time, obviously."

Defence officials faced pointed questions from members of Parliament on both sides of the table during Monday's committee meeting about the length of time it is expected to take for those new replacements to be selected and delivered.

A request for proposals will be released in the spring, with bids due in early 2020. Another full year has been set aside to evaluate those bids and another for negotiations with the winner. Delivery of the first aircraft is expected in 2025 and the last in 2031.

The Defence Department's head of procurement, Patrick Finn, underscored the complexity of the $19-billion project, which has been plagued by delays and political mismanagement for more than a decade as Canada has sought to choose a new fighter.

Those complexities include the usual challenges evaluating and negotiating the capabilities of each of the four aircraft that are expected to compete, Finn said, as well as the industrial benefits to Canada and intellectual-property rights.

At the same time, he added, the process for actually purchasing each of the planes is different given, for example, that Canada is a member of the F-35 stealth fighter project while the U.S. government would need to officially sign off on buying Super Hornets.

In fact, Finn said the government has only limited flexibility in its schedule given that most manufacturers can only start delivering aircraft three years after an order is made — though he remained confident that the timeline would be met.

The length of time was nonetheless a clear concern to some committee members.

Officials were also grilled over the cost of upgrading the CF-18s' sensors, weapons and defensive measures after the auditor general found $3 billion in planned investments over the next decade was only to keep them flying and did not include their combat systems.

The Defence Department's top bureaucrat, deputy minister Jody Thomas, told the committee that an analysis is underway, which includes consulting with the U.S. and other allies, and that a plan is expected in the spring.

But opposition members challenged Thomas when she suggested that the department would not be able to provide cost estimates to the committee before being presented to the government, saying even if it is a matter of security, they are entitled to the information.

"A unilateral declaration by a deputy or anybody that a parliamentary committee cannot have information is unacceptable," NDP MP David Christopherson said.

"There needs to be one more step to pursue that so that question, which is entirely legitimate in my opinion, can be answered in a way that respects the security and defence issues but also upholds the right of Parliament to demand any information they so choose."

Military procurement officials hopeful years of troubles finally behind them