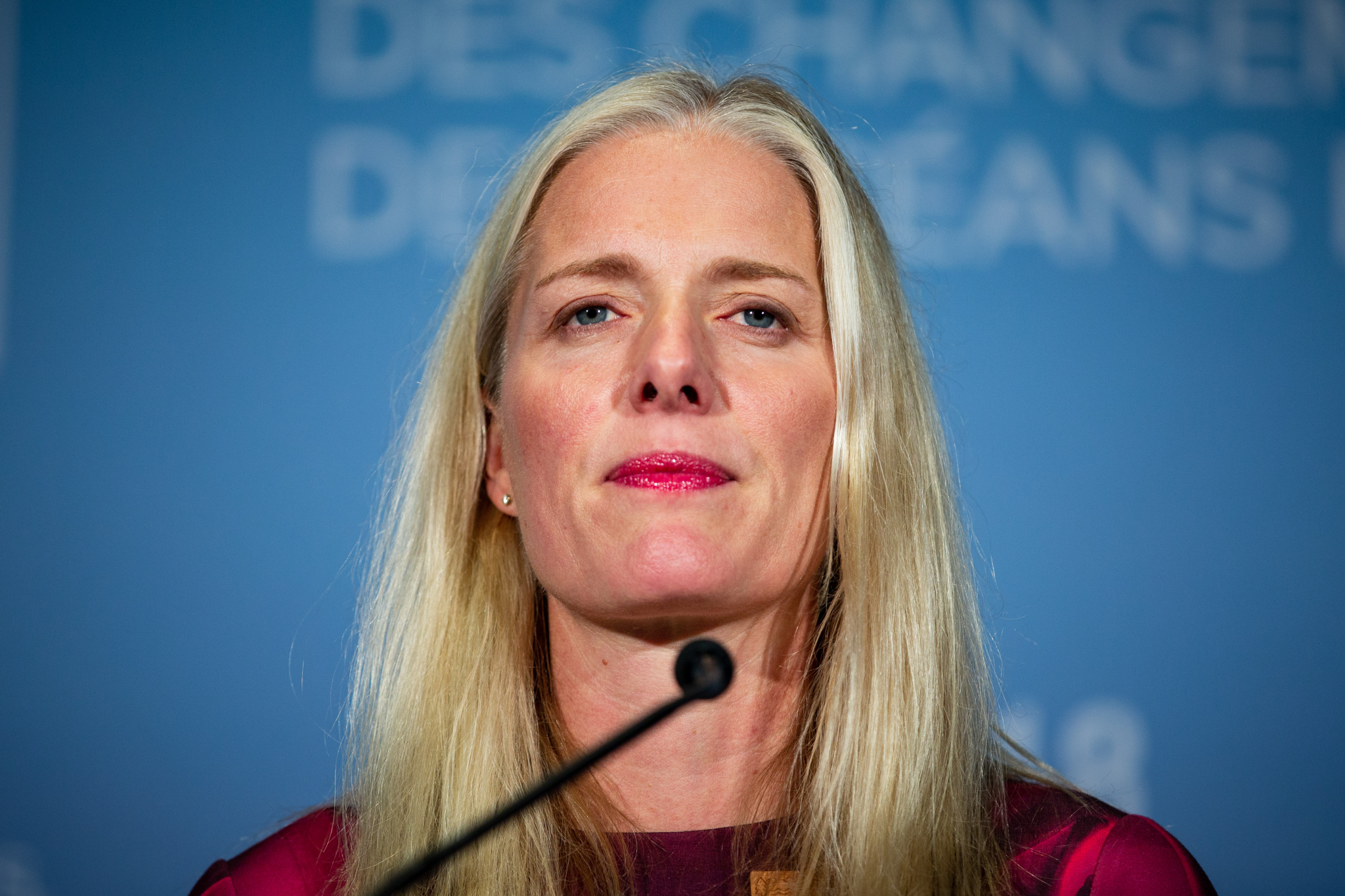 Environment and Climate Change Minister Catherine McKenna speaks to media during ministerial meetings for the G7 in Halifax on Sept. 19, 2018. Photo by Alex Tétreault
Previous story
Next story

Canada will be ready to set tougher emissions-cutting plans when the Paris climate-change agreement kicks in by the end of 2020, Environment Minister Catherine McKenna says.

McKenna is heading to Poland next week for the 24th annual United Nations climate-change meeting, where the nations of the world are supposed to decide how each country will be held accountable for its promised cuts to carbon emissions.

A secondary discussion at the meeting is on demands that countries set more ambitious goals. This month's meeting, known as the Conference of the Parties (or "COP24"), comes two months after climate-change scientists warned the world that without significantly deeper emissions cuts, the planet is on course for irreversible and devastating climate changes.

Canada, that report said in October, needs to cut emissions almost in half if it is to do its part. Canada's current target is to cut them by about 27 per cent.

McKenna has been reluctant to look at setting tougher goals when the country's climate change plan is still not strong enough to meet the weaker ones.

But, she acknowledged in an interview, "in 2020 everyone has to come back and be more ambitious," and she said Canada will.

McKenna said before then, the standards to be set in Poland are needed to help the world take stock of its progress and and ensure that everyone is measuring and reporting by universally understood rules. That will give confidence that when a country says its targets are being met, they actually are.

Writing the rule book at the meeting this month is made all the more difficult after the election of several governments that are less enthusiastic about the Paris agreement.

The United States under President Donald Trump is preparing to withdraw at the earliest opportunity — which is in 2020 — and the newly elected government in Brazil campaigned on a promise to do the same thing. The Brazilian government also just cancelled its plans to host the annual COP meeting in 2019.

McKenna said in the current global political environment, the Paris accord might never have been reached.

"I think it would be much harder," she said.

The Paris agreement, which every country in the world has signed, aims to reduce the amount of greenhouse gases being spewed into the atmosphere enough to keep the increase in average global temperature to no more than 2 C, compared to pre-industrial times, and as close to 1.5 C as possible.

The world's average temperature has already warmed up at least 1 C compared to the 19th century, and it is continuing to warm by about 0.2 C each decade. At the current rate of emissions, the planet will be 1.5 C warmer by 2052, scientists predict. After that, the impact on human health and ecosystems becomes far more problematic.

Catherine Abreu, the executive director of Climate Action Network Canada, said she is "thrilled" Canada is finally talking about increasing its goals.

"That's something Canada has really hedged on," she said.

In preparation for setting new targets, Canada is launching a new climate-change institute. The research and policy body is supposed to open within the next year to advise the government on how its existing policies are working and what else should be done. The government plans to give it $20 million over five years.

Abreu said she wants the institute to be more than just another think-tank; she wants it to be the organization that assesses Canada's progress in meeting its emissions targets. Thirty-three members of the Climate Action Network wrote to McKenna and Prime Minister Justin Trudeau this week asking them to set emissions targets in binding legislation that would not only compel the government to hit targets, but make backing out more difficult for future governments.

By Bob Weber | News, Politics | December 4th 2018
Reports from the Race to a Safer World

It's scary enough to see what

It's scary enough to see what's going on in Brazil. Why would you hold COP 25 in Brazil anyway when you are not welcome. At least the new Brazilian government is consistent in its denial regarding climate change.
The same assessment can't be said about COP 24. Why did the people in charge to choose the country where this important and symbolic meeting opted for Poland? The Polish government is not particularly known to be on side fighting climate change (even encouraging its population to consume more coal), and more upsetting is the fact that major coal energy producers are sponsoring COP 24. It looks like the Polish authorities are "thumbing their nose" at the COP 24 delegations.