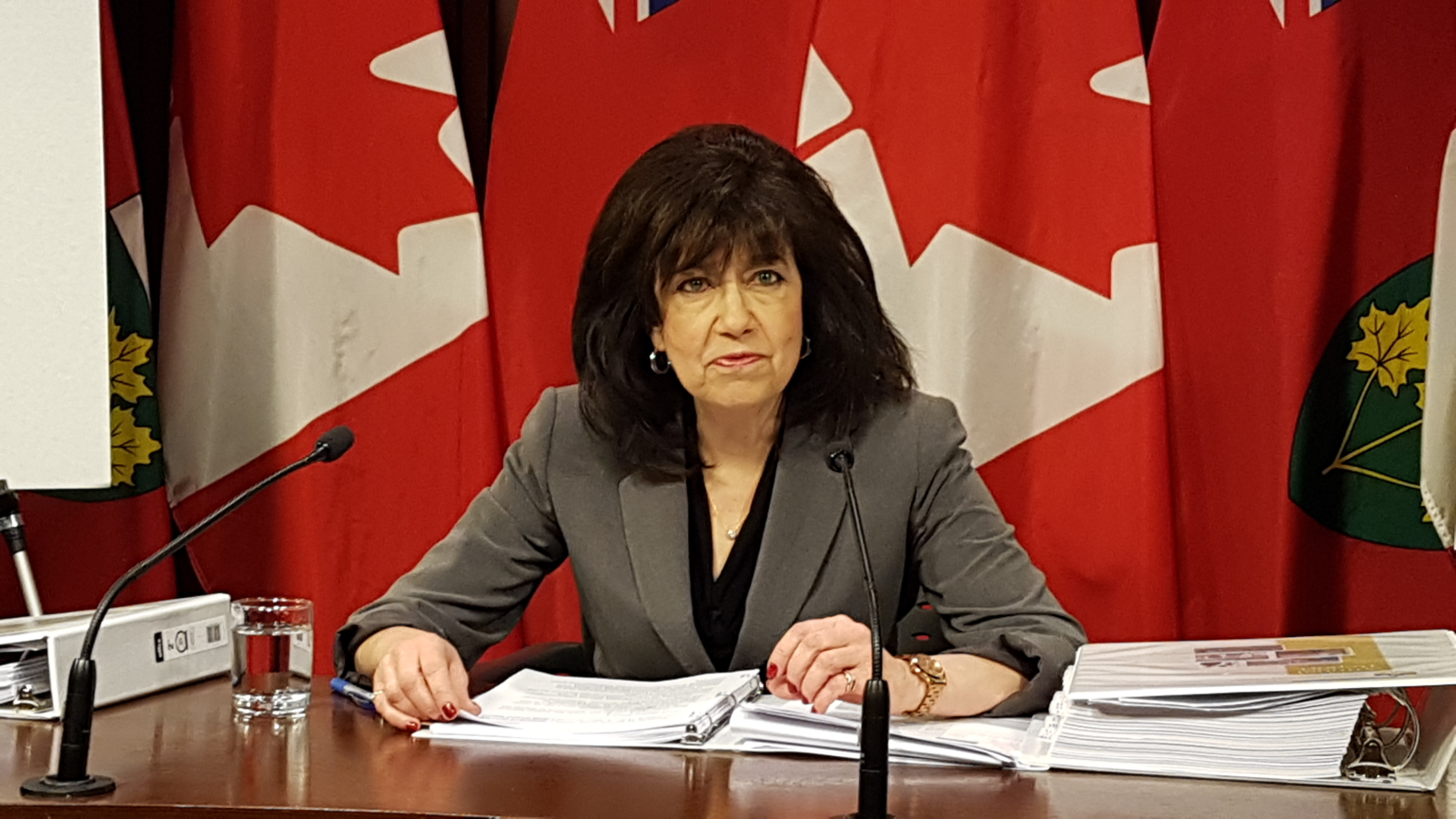 An Ontario cabinet minister is vowing to bring in “more oversight” for the province’s oil and gas pipelines, following a damning audit that found the responsible government agency failed to do proper inspections or filing key reports.

The audit, released on Wednesday by the provincial auditor general, found that the provincial public safety regulator, the Technical Standards and Safety Authority (TSSA) had a lackadaisical approach to overseeing the industry, neglecting its public safety inspection duties and putting the environment at risk.

The audit also noted that the provincial Ministry of Government and Consumer Services had fallen short in its role to oversee the agency and ensure it is enforcing public safety.

Pipeline operators in Ontario, for instance, are responsible for their own inspections, according to the audit, included in an annual report released by auditor general Bonnie Lysyk. The only check and balance the TSSA has in place is an inspection of these records once every five years; the agency does not and has not personally inspected the natural gas and oil pipelines in Ontario.

Among other findings of the audit:

Lysyk said her team’s findings about the TSSA’s lack of proactive regulation was what surprised her the most in the 800-page annual report – her sixth annual audit prepared for the Ontario's legislature. Overall, she found that 15 government programs and authority bodies – including the TSSA – were wasting public funds and required more oversight.

"We were surprised to see that they were not doing things in a way that one would expect," she said. “They’re supposed to be protecting safety. Their whole means of existence is inspections and making sure things are working. And we didn’t see that working.”

“Every five years they go and look at paperwork,” Lysyk said. “We’re saying maybe you should go see where these pipelines are...I’d say they need to be more proactive.”

Responding to the report, the newly-named Government and Consumer Services Minister Bill Walker told reporters that the auditor’s findings were “simply shocking” and that he was giving the agency 57 days to clean up its act.

He also saw the audit as a “call to action,” noting that he had already spoken to the agency, earlier in the day, urging it to take “immediate steps to address the auditor general’s recommendations,” and report back to him with a plan before the end of January.

The minister said he had asked the agency to review the chief safety officer’s rules and responsibilities. The agency has a surplus, he told reporters, so it was “unacceptable” that they were not being held to account to do their job properly. He said he would “moderate wherever he can” moving forward and if the government has to change laws to improve public safety, it would do so.

“This is a government of action, about actually doing things for people. Not just slogans. Not just studies. We’ll take action to ensure that we’re putting oversight and accountability back in the system,” he said. “We will have more oversight. That is me. The buck stops with me.”

But opposition MPPs are skeptical about the Ford government’s sudden interest in improving oversight, only weeks after it had announced plans to eliminate the office of Ontario’s environment watchdog and to relinquish the province’s authority to review new pipeline expansion projects.

Ontario Green Party leader Mike Schreiner said it was “disturbing” that these things were happening at the same time. He called for TSSA to “be completely overhauled.”

The ⁦@OntarioAuditor⁩’s report about serious problems with public safety enforcement, politically motivated transit decisions, and assistive devices reminds us why government oversight is so important.

So why is the Premier working so hard to dismantle it? #onpoli pic.twitter.com/7Qfo1bfI3k

“The Ford government is actually reducing oversight at a time when we need more,” he told reporters at the legislature. The findings about the TSSA’s failure to inspect is “a direct threat to our water and our health and our environment,” he said.

Official Opposition NDP Leader Andrea Horwath said she doesn’t have “a lot of confidence in this government’s commitment” to fix this issue in light of their record so far.

“We see a government that is always talking about not spending money, and about saving public money, well, I think they need to realize that a government’s job is bigger than that,” she told reporters. “It’s actually about protecting people’s safety as well.”

No reason provided for lack of inspections

Established in 1997 by the Mike Harris-led Progressive Conservative government, the Technical Standards and Safety Authority (TSSA) is the provincial body responsible for the promotion and enforcement of public safety in the oil and gas sector and three other sectors that cover a diverse range of items such as furnaces, elevators, amusement park rides, ski lifts and stuffed animals.

The TSSA first came under scrutiny in 2008, after an explosion at the Sunrise Propane facility in Toronto. The agencyis self-funded through the fees it obtains from the companies that it regulates.

The authority, Rose said, has a five-point plan for moving forward including: using "enhanced data in identifying risks;" "respond(ing) with actions that improve education, support and enforcement;" being more "transparent in reporting our actions and findings to the public;" reviewing and changing its business model as necessary; and "be(ing) relentless in evaluating our impact on safety."

The TSSA's communications manager, Steve Robinson, said in an email Wednesday to National Observer that the authority would respond to the government's request for an update by January 31.

But Robinson did not answer questions about how the authority will enhance its data, why it reviews pipeline companies' inspection reports every five years, why reports on fuel leaks and liquid petroleum spills are missing, or why the TSSA has not used all the funding allocated to it by the provincial government.

Robinson also did not respond to a question about whether the TSSA plans to hire or train new inspectors, or how many inspectors are explicitly assigned to issues related to pipelines and the oil and gas sector.

The issue is paramount, according to the auditor general’s report, because the TSSA has not taken any action to improve its regulatory oversight since a pair of pipeline leaks in 2013.

Both were caused by external corrosion that pipeline operators had failed to identify.

The first oil spill occurred in Sarnia in an unlicensed one kilometre long pipeline used to transfer crude oil. The second also occurred in Sarnia, releasing about 60,000 litres of diesel fuel, some of it reaching the St. Clair River.

Lysack said in her report that the agency did nothing to update its monitoring practices in the wake of those incidents.

In addition, the agency “could not provide (the auditor general) with any rationale for using a five-year audit interval.”

The TSSA is a complete failure. They are belligerent to the industry they regulate, provide no value to anyone and charge outrageous fees for inspections. They should be put out of their miserable existence. #onpoli https://t.co/2pR3SCSkdp

The report also found that the TSSA does not regularly inspect other areas in the fuel sector such as compressed natural gas stations, propane distributors, fuel storage locations or private fuel-storage tanks—all of which could threaten Ontario's drinking water supply, which is already experiencing great rates of pollution.

On Nov. 13, Ontario's environmental commissioner found that the provincial rules and regulations on toxic waste water pollution, based on studies from the 1980s, haven’t been updated in 25 years — implicitly allowing industries to dump large amounts of toxic substances into Ontario’s waterways, including lead and arsenic.

The auditor general’s findings suggest that the lack of public safety inspections will only increase the risk of water contamination.

According to the Ministry of the Environment, Conservation and Parks, there have been 640 oil tank leaks in the last five years, resulting in the release of 153,000 litres of fuel oil in surrounding land and water.

Audit officials said the ministry did not provide the locations of these oil spills.

Lysyk noted Alberta’s more periodic regulatory practices as a better example of how the government could investigate fuel operators and distributors. In Alberta, inspections take into account the pipeline operator’s performance and compliance history, sensitivity of the area where operations take place (for example, proximity to bodies of water), frequency of environmental incidents in the area, complexity of the operation, and risk if an incident can happen.

Officials from the Ministry of Government and Consumer Services and Environment, Conservation and Parks told National Observer they will be working together to address these issues and strengthen public safety to help meet the auditor general’s recommendation that there be more proactive action between the agency and the ministries.

Nothing has been done to prevent oil spills

Since October 2010, as part of a pilot inspection program and investigations of reported oil spills, the TSSA inspected 18 of Ontario’s 158 oil distributors; four were found to be delivering oil in leaking tanks, another three were found to be unsafe, and some posed a high risk of carbon monoxide release.

Nothing has been done to address the issue, the auditor general’s report found. Her team was only able to review 14 of the 18 inspection reports, as the TSSA “was not able to locate four of the reports,” according to Lysyk's report.

Two of the oil distributors were not able to provide the TSSA with any inspection records. And the record of another five distributors “were incomplete or illegible.”

“We asked the TSSA why, despite knowing for the past several years that fuel tanks present a serious safety hazard, it has done nothing to deal with this hazard,” the report said, noting that the TSSA could have collected inspection records or furthered the scope of its investigations.

“The TSSA told us it was planning to deal with this safety hazard but that other priorities had taken precedence,” the report said.

While the TSSA has also identified 300 abandoned fuel sites—mostly old gas stations—with 740 fuel tanks, little has been done to ensure the clean up of these sites.

“As a result, whatever fuel contamination there is at the site remains,” the report said. “Nothing will be done until contamination spreads outside the boundary of the private property.”

When asked about these fuel spills and contamination, Minister Walker said he was aghast that the agency had faced no blowback or been held to account for “allowing people to put oil in a leaky tank.”

“How could anybody in good conscience say that’s an acceptable thing, regardless of who the government is?”

The Auditor General’s 2018 Annual Report sheds new light on the Liberals’ historic waste & mismanagement. That reckless spending stops now. Our government is committed to working with, and acting upon, the recommendations of the @OntarioAuditor. #onpoli pic.twitter.com/n2FcSnyqDz

Other significant public safety failures by the TSSA found by the auditor general include: