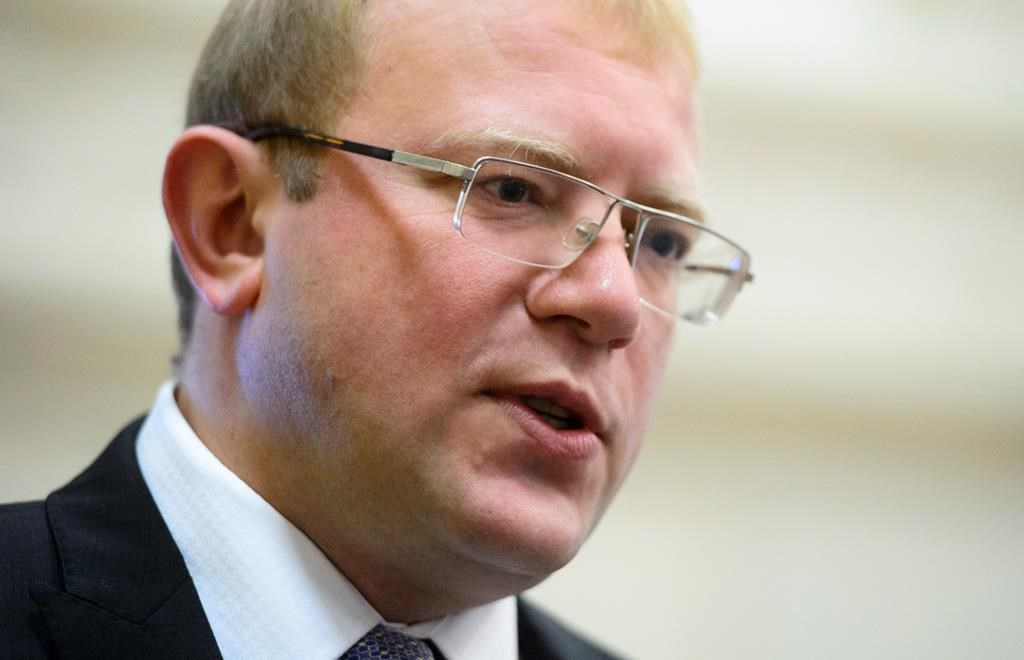 Ukrainian ambassador to Canada Andriy Shevchenko appears at a House of Commons defence committee on Parliament Hill in Ottawa on Tuesday, Dec. 4, 2018. Photo by The Canadian Press/Sean Kilpatrick
Previous story
Next story

Ukraine is asking Canada to apply more sanctions on Russia as fresh tensions between the eastern European neighbours threaten to erupt into open conflict.

The country's ambassador made the appeal during an appearance before a Commons committee on Tuesday in which he also asked that Canada extend its military training mission in his country and support its bid to join the NATO military alliance.

Ambassador Andriy Shevchenko also confirmed that Ukraine is close to buying high-powered sniper rifles from a Canadian company, but said Kyiv is still hoping the federal government will agree to provide weapons as aid.

Shevchenko's committee appearance, alongside counterparts from Georgia and Moldova, came weeks after Russian forces opened fire on and seized three Ukrainian naval vessels and 24 sailors during a confrontation in the Black Sea.

The incident has been described as the worst round of direct violence between the two countries in years and followed Russia's support for elections in two breakaway regions of eastern Ukraine, votes condemned by Canada and others.

The three ambassadors were unsparing in their criticisms of Russian actions in eastern Europe, which they described as intentionally destabilizing, and warned that what happens there will have ramifications on the rest of the continent.

Yet while all three thanked Canada for its support over the years, Shevchenko also asked that Canada tighten its sanctions on Russia in retaliation for the naval confrontation and elections in Donetsk and Luhansk.

New U.S. and European sanctions had been imposed even before the two Ukrainian gunboats and tugboat were seized near the Kerch Strait on Nov. 25, and Shevchenko hopes the incident and elections would prompt Canada to take follow suit.

"We believe it's a good time to go about step up the sanctions," he told The Canadian Press after the committee meeting. "Our view is that Canada is exploring new ways to put pressure on Russia. We also feel there is co-ordination between Canada and its western allies, and we welcome it."

Russia has accused Ukraine of instigating the incident, in waters near the Crimean Peninsula, but Canada and other countries have sided with Ukraine in blaming Moscow.

The ambassador also confirmed talks are underway over renewing Canada's military training mission in Ukraine, which was established in 2015 and has seen Canadian troops train thousands of Ukrainian counterparts.

The mission, involving 200 troops, is set to expire in March, but Shevchenko said his government is pushing for an extension as well as an expansion that will include adding more personnel as part of an increased NATO presence in the country.

As for NATO, Shevchenko said his country is hoping Canada will lead the charge to admit Ukraine as a member after his country's parliament agreed last month to draft constitutional changes that its president says will compel future governments to seek to join the European Union and NATO.

Canada was one of the champions of such a move in the past and Foreign Affairs Minister Chrystia Freeland's spokesman, Adam Austen, said in an email late Tuesday that "Canada is committed to helping Ukraine realize its ambitions of becoming a member of NATO."

But many alliance members have taken a more cautious approach in recent years amid concerns such a move could spark a major war with Russia, which has lashed out at NATO encroachment and given that an attack on one member is to be treated as an attack on all.

Ukraine's sniper-rifle purchase was made possible when the Liberals added the country to the Automatic Firearms Country Control List. And while other arms deals are in the works, Shevchenko said Kyiv is still holding out hope, even after years of fruitless requests, that Ottawa will provide heavier weaponry to help Ukrainian forces better defend themselves.

"Many things have changed," Shevchenko said of Canada's rejection of past requests for lethal aid. "A lot of things have happened to make Canada much (more) concerned and serious about the Russian interference into Ukraine."