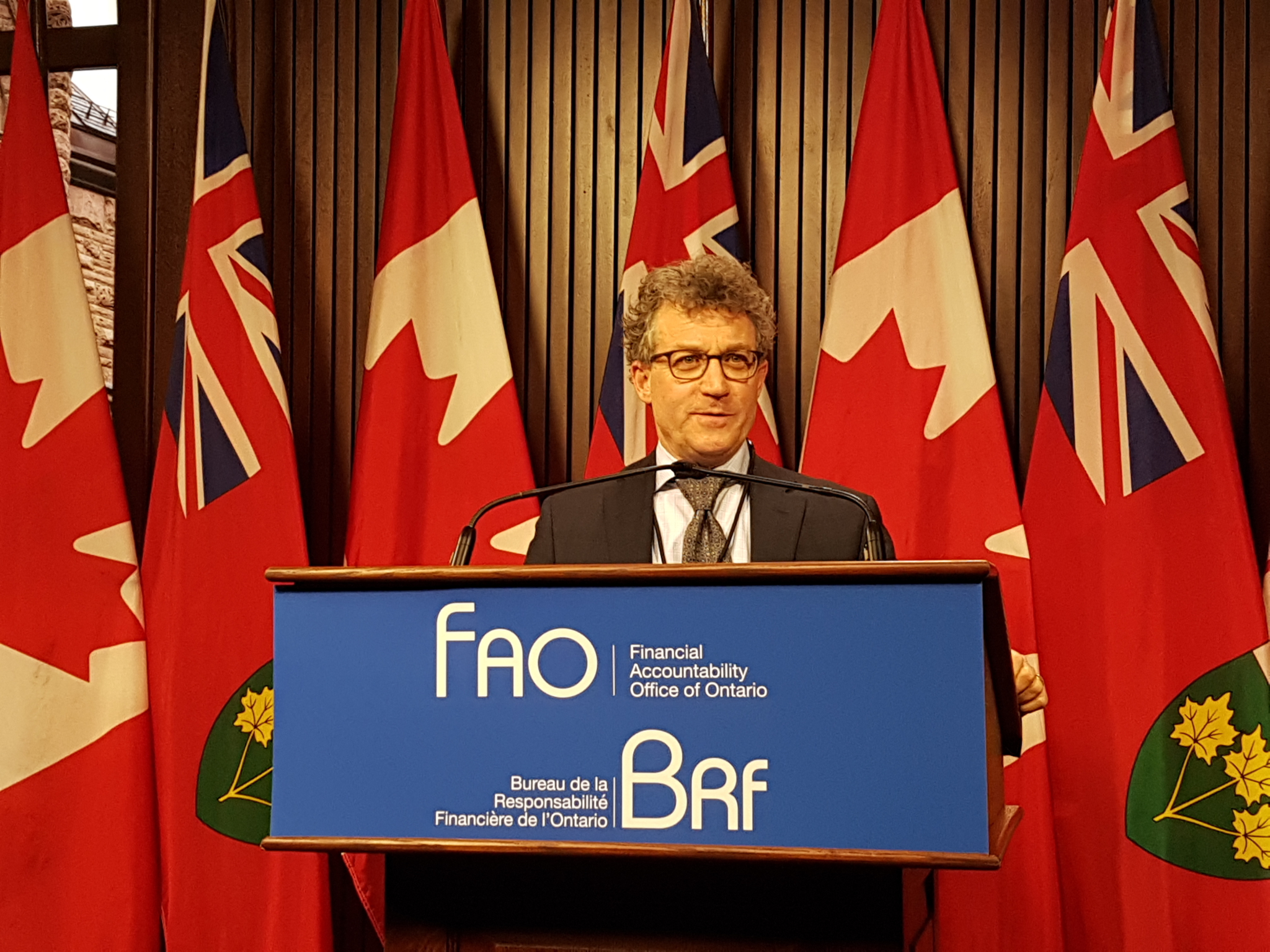 Premier Doug Ford's promises to balance the Ontario budget without raising taxes could cost an average of $850 per person every year for four years, says Ontario's fiscal watchdog.

His government would have to cut spending by eight per cent — a level unseen since the 1990s — to fulfil a promise to balance Ontario’s budget and to refrain from tax hikes over the next four years, Financial Accountability Officer Peter Weltman said as he released his review of the province’s books on Monday.

In the review, Weltman raised the estimate of the province’s deficit for 2018-2019 to $12.3 billion. That's half a billion more than he predicted before the June 2018 election and significantly less than the Ford government's $14.5 billion deficit calculation.

Nearly half of the difference can be attributed to the fiscal watchdog's office choosing to exclude a $1-billion reserve fund. The remaining $1.2-billion difference is due to the Ford government basing its revenue calculations on pessimistic economic forecasts, Weltman said.

The Ford government has previously said it has already saved $3.2 billion since being sworn into government, but Weltman told reporters this was wrong. He said the Ontario Tories have found only $1.7 billion in savings, and the other $1.4 billion is a promise to find more savings.

The difference is in the year-end savings — a routine estimate for what ministries don’t spend by the end of the year. The previous Liberal government also found $1.4 billion in savings in their last budget.

When asked by a reporter if the the government can claim to have found $3.2 billion in savings since taking office, in light of this fact, Weltman said, “it’s a free country.”

But, Weltman did make clear that the deficit projections in the latest report are due to the combined policy decisions of both the previous Liberal government and present Conservative one.

Much of Weltman's calculations are rooted in policy changes implemented by the Ford government in the six months it has been in power. These include:

“After four years of strong economic growth, Ontario’s budget deficit will more than triple this year to $12.3 billion in 2018-19,” Weltman said. “The 2018-19 deficit will be the largest since 2011-12, the result of a significant increase in program spending combined with a decline in overall revenue."

If the Ford government sticks with the status quo, and does not cut program spending, Weltman said the deficit will exceed $16 billion by 2022-2023.

That number could also change, Weltman said, because it doesn’t include the savings the government has promised to find but hasn’t yet identified, or the tax cuts and rebates it promised during the election that have yet to be implemented.

The report comes almost a month after Ford released his fall economic statement in which his government predicted a $14.5 billion deficit.

Last week, the Toronto Star reported that the province’s chief accountant, Cindy Veinot, quit after she refused to sign off on that estimate, telling a legislative committee that the deficit was "materially" overstated.

While the government's fall economic statement did not include a budget forecast beyond this year, nor a path to balancing the books, Weltman said that based on current projects, any "significant changes" to policy to achieve this goal could have wide-ranging impacts on Ontario households and businesses.

Weltman urged the government to have “an informed debate” about “the trade-offs necessary” to balance the budget in light of increasing economic demands from Ontarians and a worsening provincial fiscal outlook.

“While the government has not indicated when it intends to balance the budget, it has committed to not raising taxes,” Weltman said, adding that this commitment would require a rethinking of programs that need to be delivered. To get Ontario back into a sustainable fiscal position before the 2022 election without tax hikes would require that program spending growth be held at 1.2 per cent annually, he said.

'Magic money and fairy dust seems to be the plan': Mike Schreiner on Ford's lack of financial plan

In a statement on Weltman’s report, Ontario Finance Minister Vic Fedeli stood by his government's numbers.

“While we have already taken steps by finding more than $3.2 billion in efficiencies and savings, we still have more work to do … We must continue to work towards finding efficiencies in order to return to balance in a responsible, pragmatic way.”

But, opposition MPPS said the Ontario Tories are exaggerating the deficit to justify deep cuts, with the NDP calling it "fear-mongering" to make finances look worse than they are.

“Just like Kathleen Wynne’s Liberals, Doug Ford’s Conservatives have really cooked deficit numbers to suit themselves,” NDP MPP Sandy Shaw told reporters, adding that the Ford government has "tried to have their cake too" by presenting inflated deficit numbers and austerity savings that are not accurate.

"How can you balance the budget at such a rapid speed when the government is giving up revenue?" Shaw told reporters. "These cuts to get to that balance will not only include jobs, but things people rely on like healthcare, education."

Liberal MPP Mitzie Hunter said the fiscal watchdog proves Fedeli is pushing an "inflated deficit number, which really provides the context for deeper cuts to programs and services that people rely on."

Green Party leader and MPP Mike Schreiner told reporters the government "is playing political games with the province's books," by "overstating" their revenues and the deficit — he was clear in pointing the finger at the "reckless" actions of both the previous Liberal government and the new Conservative government that have led to the significant increase in projected deficit in the past year alone.

FAO finds the Ford government has overstated its savings and the deficit.

Most troubling for me is how govt can justify a tax break for the top 1% when the province is in this financial hole. https://t.co/EZ049k26ae #onpoli pic.twitter.com/Z3r4taFeQU

"Looking at this fiscal picture...magic money and fairy dust seems to be the plan. That's what happens when you write your plan on the back of a napkin," Schreiner said. He endorsed Weltman's call for a debate about Ontario's fiscal future.

Both Shaw and Schreiner asserted that Ford was leaving the province ill-prepared for an imminent period of slow economic growth predicted in Weltman's report and any potential recession.

"The lack of detail in the fall economic statement does not give anyone any confidence," Shaw said.

"To run such a large deficit when economic growth is so strong, it restrains our fiscal capacity to respond to the next recession," Schreiner said. "We have to build in a pathway to balance."