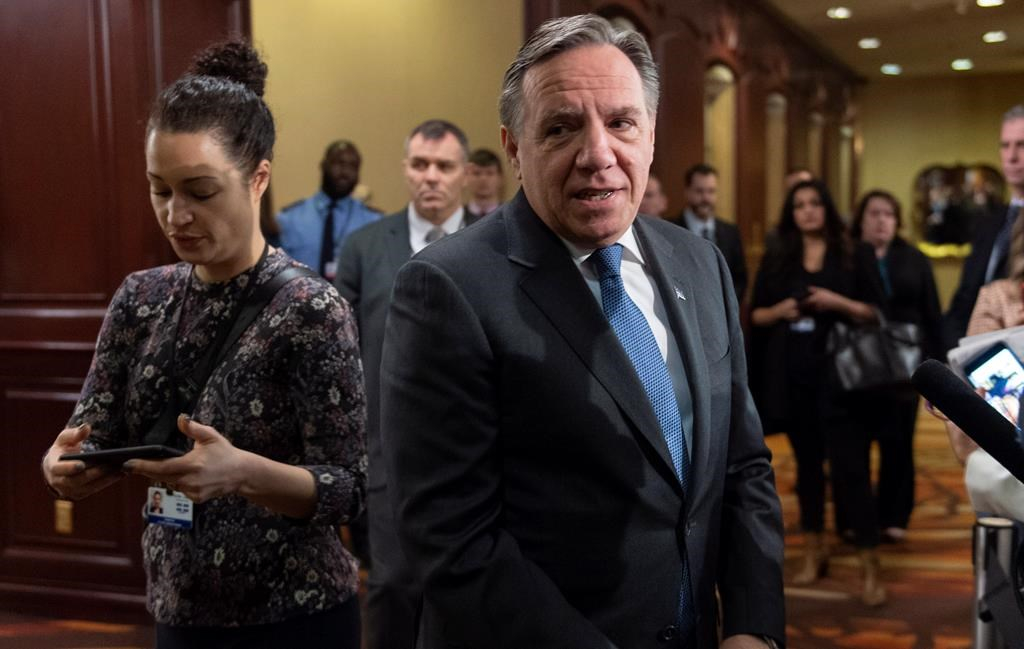 Quebec Premier Francois Legault said he made progress during Friday's first ministers' meeting on his demand that the federal government pay $300 million in compensation to cover the cost of refugees arriving in the province.

Legault said Ottawa had previously offered to cover only the cost of lodging the asylum seekers — about half of what Quebec was seeking.

"This afternoon they have moved forward a little more to say they are ready to look at other expenses besides lodging," Legault told reporters at the end of the meeting. "We will have discussions with the bills between ministers and bureaucrats to get as close as possible to $300 million. It is a lot of money."

Since 2017, there has been an influx of asylum seekers entering Quebec across the United States border. Legault said it takes more than 18 months for would-be refugees to find out if they can remain in the country.

In the meantime, Quebec pays for their housing, education and health care costs, which have totalled roughly $300 million over two years, Legault said. He said Ottawa is responsible for the lengthy delays in the system.

"I expect Mr. Trudeau to compensate us," he said before meeting the prime minister and his fellow premiers.

"It's unacceptable for it to take 18 months before (asylum seekers) get an answer. And in the majority of cases, they are refused, because they cannot prove that their life is in danger."

Federal authorities processed 24,745 asylum claims made in Quebec in 2017 — five times more than the previous year. The pace has continued this year, with 23,595 claimants in Quebec processed through the end of October.

The province receives more than half of all asylum claims in Canada, including the vast majority of those entering through non-official border crossings.

Legault said it is Ottawa's responsibility to pay for the direct costs of asylum seekers.

"The request is totally appropriate, and I hope that the government is going be attentive to this request," New Democrat MP Matthew Dube said.

Conservative MP Pierre Paul-Hus said Quebec should not be left with the bill for what he called "the mistakes and the failures of the prime minister."

Gabriel Ste-Marie of the Bloc Quebecois said Ottawa should be compensating Quebec rather than helping Alberta buy rail cars to ship oil, something Trudeau has said he would consider.

"The crisis is being badly managed by Ottawa," he said. "It's Quebec that is left with the bill."

The issue of compensation for refugee costs is part of larger negotiations between Ottawa and Quebec over immigration.

The Legault government this week announced plans to reduce annual immigration to the province by 20 per cent starting next year. The province wants to reduce all three types of immigration: economic, family reunification and refugees.

It only controls economic immigration, however, so it needs Ottawa’s co-operation to curtail immigration in the other two categories. And Trudeau has already raised concerns about Quebec’s plan.

According to a 1991 agreement between Quebec and the federal government, the province is guaranteed 25 per cent of the total money Ottawa transfers to the provinces for immigration settlement.

— With files from Mylene Crete

Premiers head to Montreal for tough meeting with Trudeau

First ministers' meeting likely to be most fractious, least productive for PM