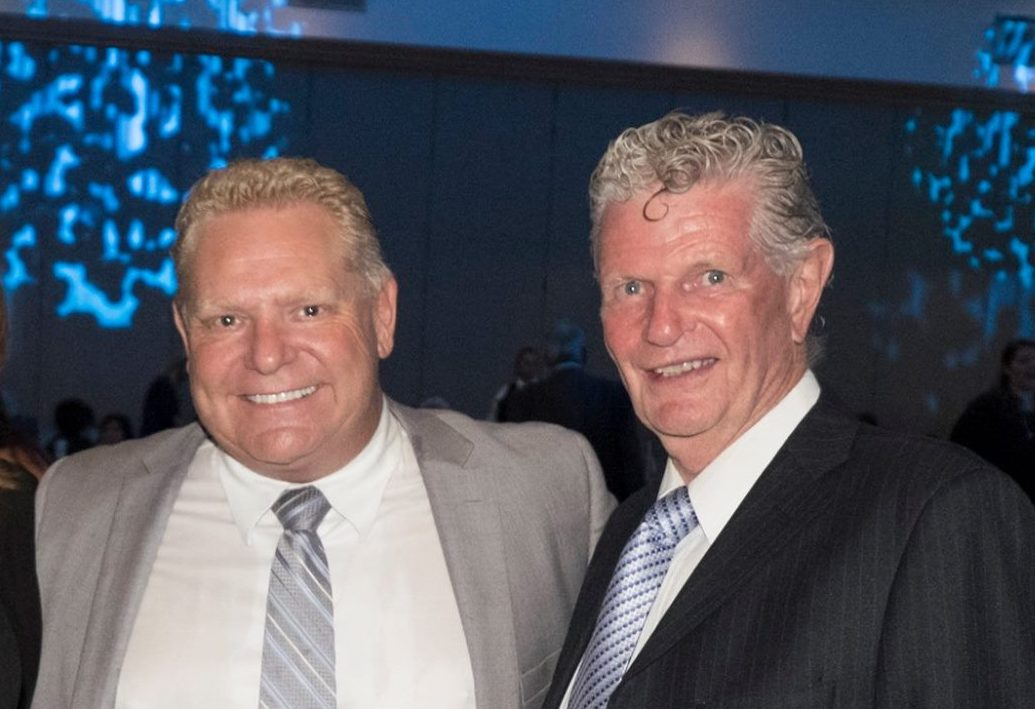 The Ontario government is slamming the brakes on a controversial appointment of a family friend of Premier Doug Ford to lead the province's police force.

The government made the stunning announcement on Saturday, under mounting criticism, after the appointee, Toronto Police veteran Ron Taverner, asked it to delay the appointment, pending a review. Taverner, 72, was slated to start the new job on Monday, but his appointment was clouded by controversy, following a series of revelations that raised questions about whether he had received preferential treatment.

“Out of the greatest of respect for the brave men and women of the Ontario Provincial Police, I am requesting my appointment as commissioner be postponed until as such time the integrity commissioner has completed his review,” Ron Taverner, 72, said in a statement issued Saturday afternoon, initially reported first by CTV.

“While the government has full confidence in Mr. Taverner, we will respect his request for a delay in his appointment, until such time as the integrity commissioner has conducted a review of the selection process,” Jones said in the statement.

The statement comes a day after the acting head of the Ontario Provincial Police, Brad Blair, asked a court to rule whether the provincial ombudsman can review the hiring process that saw Taverner named as the next OPP commissioner. The appointment is considered to be significant for a number of reasons, including the fact that the OPP can be tasked with investigations of government, including the premier and his office.

Blair filed an application to a divisional court after Ontario ombudsman Paul Dubé turned down a request earlier in the week from Blair to probe “potential political interference” in the appointment “to determine and enforce the jurisdiction” of the ombudsman to review the OPP commissioner hiring process.

According to Friday’s application, the ombudsman declined to investigate because Taverner’s appointment “is ultimately a decision of cabinet” and thus not within his scope to review.

On Saturday, Blair responded to the news of Taverner's request for a delay. "I do not regret a single step I have had to take," Blair wrote in a statement — possibly his last as OPP Commissioner. "I remain devoted to ensuring that the well-earned reputation of the Ontario Provincial Police remains untarnished."

Julian Falconer, Blair's lawyer, told reporters in a conference call that Blair had been "directed to" step down by ​​​​​​Mario Di Tommaso, deputy minister of community safety and correctional services. Falconer said "it was not a surprising development," because the government had asked Blair if "he understood that this kind of measure might be necessary in view of the sensitivities of the issues and the questions being determined, that they may opt to go in a different direction for the interim post."

"And that was completely understandable," Falconer said, adding that Blair was "perfectly prepared" to continue his role, but understood why he might not be able to.

"My client views the welfare of the service and the integrity fo the command as the highest priority and he has no difficulty in stepping aside to permit this process to continue," Falconer said.

Falconer would not provide details of when the conversations between Blair and ministry officials took place.

In his statement, Blair said he had already had discussions with Couture and would be "fully supportive in assisting his transition." Blair also said that he "understand(s) the preference for an alternative interim commissioner and will cooperate in every respect."

Falconer said that Taverner's decision to delay his appointment pending a review does not impact the court proceedings, which he has requested to be "case managed" (or expedited). Falconer has written to the ministry lawyers with the same request.

"Nothing has changed from yesterday," Falconer said in the conference call with reporters. "What has gratefully occurred is that the ministers have recognized the merits of the suggestions made by interim Commissioner Blair that pending a review that it makes sense to allow these matters to be addressed to clear the cloud."

Falconer believes that the government's decision to delay the appointment "came through Taverner" — an assumption he is making based on Taverner's speaking to the Toronto Sun and providing quotes about an alleged request made by Ford for the police force to make modifications to an RV-style vehicle, and to keep any spending on these modifications off the books. The Sun column that initially attributed quotes to Taverner about this topic, later removed that attribution in the article that was published online.

Blair 'obviously receives no favour by this particular government'

Falconer said Blair has received an "extraordinarily positive" response to his decision to question the Ford government's appointment process. Blair has been "blown away" by the volume of correspondence he has received and the standing ovations he receives in many OPP rooms, Falconer said.

"He is very touched by the support he has received," he added.

"The issues that the interim commissioner has raised to the ombudsman and now the court were issues that were out there already. They were issues that caused severe and large amounts of concern. He sees that cloud as impacting the credibility and perceived independence of the Ontario Provincial Police and he chose, frankly with real career-limiting prospects to him...he chose to insist that this be looked at and the air being cleared.

"I don't see what's in it for him," Falconer said. "He obviously receives no favour by this particular government in terms of his professional future."

"I'm not very accustomed, in my practice, to be hired by police leadership. I am honoured to act for this man, both in his role as commissioner and as a courageous guy," Falconer said.

At Queen’s Park Saturday, Deputy NDP Leader Sara Singh told reporters that Taverner’s move to postpone his appointment is welcome but raises further questions about how a close friend of the premier was given the top policing job after the qualification level was mysteriously lowered, allowing him apply.

"Where there is smoke, there is fire. There are a lot of unanswered questions here," Singh said. “We need to have answers."

The NDP has called for for an “emergency select committee” of an equal number of MPPs from both sides to investigate the hiring — with the power to compel witnesses in public sessions — in addition to the integrity commissioner’s investigation.

The premier's office needs to clarify how everything was allowed to happen, Singh said, noting that it was unclear whether Taverner himself made the decision to ask that his swearing-in be postponed or whether he was asked to by the premier’s office.

"The people of Ontario owe our thanks to Brad Blair," she wrote. "As acting Commissioner of the OPP, Blair put the integrity of the police service ahead of his own ambitions."

The people of Ontario owe our thanks to Brad Blair. As acting Commissioner of the OPP, Blair put the integrity of the police service ahead of his own ambitions. #onpoli

Falconer emphasized to reporters that the ombudsman review Blair was requesting was "the only robust route to get at very serious allegations in terms of the conduct in his hiring process, involvement of deputy ministers and the like." Only the ombudsman had the summoning powers that was needed for a proper investigation, Falconer said, exceeding the powers of the integrity commissioner.

Any findings and recommendations by the integrity commissioner, Falconer added, would be subject "to the whims of the government of the day, putting us in an extremely difficult position when you have a majority government who actually is at the heart of the concerns."

"We are talking of a combination of a more robust process and more independent process, which is why it's so important to get the ombudsman to do his job," Falconer said.

Ontario legislators have already been recalled to Queen's Park on Monday for an emergency sitting to deal with back-to-work legislation to end a strike by the Power Workers’ Union, which threatens to shut down Ontario Power Generation’s nuclear reactors that provide almost half of the province’s electricity supply.

The government is expected to face more questions about Taverner's appointment in question period beginning on Tuesday.

Editor's note: This article was updated at 8:26 p.m. ET on Dec. 15, 2018 with an updated picture featuring Doug Ford and Ron Taverner, as well as new comments made on Saturday by NDP Leader Andrea Horwath.

Integrity commissioner 'enquiry' very much an inadequate route to investigate the history of Taverner's recent appointment, looks every bit like a fig leaf for allowing a corrupt decision to stand... and to escape just reprisals. The ombudsmen needs to assume his duties in this regard.... get busy protecting the public interest....instead of looking every bit like a lapdog .

I hope Ontario voters are

I hope Ontario voters are happy with their choice.........cuts to midwives, to education and nepotism appointments by old white men of old white men. Make Ontario great again.........exploiting again, the children, the caregivers, the poor. Save pennies by cutting essential services, and by all means, lower taxes for the haves.
It's a recipe for a kind of greatness. Enjoy. P.S. Your cover picture speaks volumes...more than any of us can likely put in words.

I'll have what both are

I'll have what both are sniffing. Love that bright eye look! The close similarity between Trump and Ford administration is uncanny. How sad is that? And It scares me to think of the cyber interference in our next elections matching that of the U.S. 2016 elections. Hopefully Canadians are not quite as gullible...