Speaker Geoff Regan opens the door to his apartment in Parliament 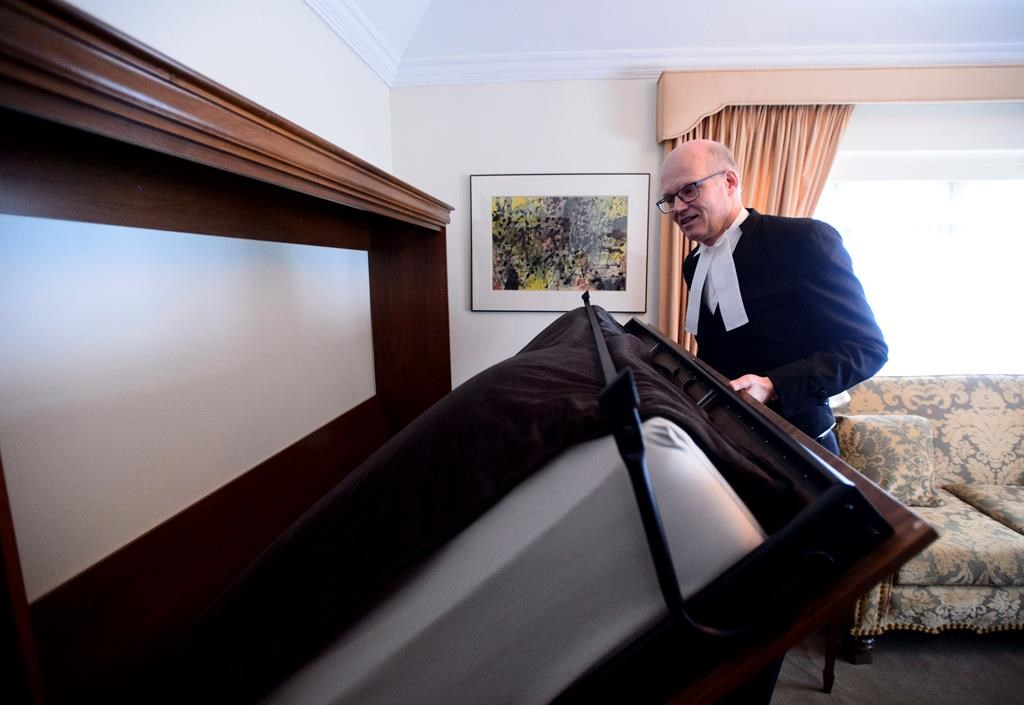 Speaker of the House of Commons Geoff Regan shows the hide-a-bed in the Speakers Apartment as he gives a tour of the Speakers Office and apartment on Parliament Hill in Ottawa on Monday, Dec. 3, 2018. File photo by The Canadian Press/Sean Kilpatrick
Previous story
Next story

One of the best-kept secrets inside the main building on Parliament Hill — known as Centre Block — is what's inside room 202N.

Major renovations are about to begin on Centre Block, and just before the storied building is shut for at least the next 10 years, the Speaker has decided to take out his key and shed some light on the mystery.

Speaker Geoff Regan says he passed by the door hundreds of times without knowing what was on the other side.

"Let's find out," Regan said during a recent tour.

The door opened to a sparsely furnished, minuscule room. Another room beside it is just as cramped.

Regan walks in, turns to his left, and pulls the knob of a wall unit.

"This is the Speaker's bed," Regan said, as he pulled down a Murphy bed-style retractable mattress. "Sometimes the House sits until midnight or later and it's a place where you can get a little shut-eye before the morning comes too quickly."

The room is far from a presidential suite.

"Everyone has the impression that it's very luxurious ... but as you can see, it's more like a Super 8," he said, giggling.

The Speaker of the House of Commons is the only person authorized to sleep in the Centre Block. But since Regan got the job he's preferred to catch his shut-eye elsewhere.

That's probably because his first night in the room, in May 2016, things got a little loud.

He was in the bedroom resting ahead of his turn to preside over an emergency debate in the House, when around 3 a.m., he was woken by "a loud noise," which turned out to be construction work.

"I walked in my pyjamas — no shoes, no socks — to the security guard office in the Peace Tower to ask if it was possible to stop the noise. It wasn't a good night. It took some time before I decided to sleep here again."

There is an impossibly narrow hallway leading to the Speaker's dining area, which is also modest in size. Inside that room is an armoire, and within that is another well kept secret: the Speaker's scotch.

Milliken saw that in the U.K., they had a Speaker's scotch and he decided to import the tradition to Canada, Regan said.

The Speaker's office is also impressive — in large part due to the framed photo of a grumpy-looking Winston Churchill, a shot of the war hero that has become internationally recognized.

Churchill's photo was taken by photographer Yousuf Karsh on Dec. 30, 1941, inside the Speaker's office.

Regan said the British politician had entered the office and lit up a cigar after giving a speech to the House of Commons.

Karsh had asked Churchill to remove the cigar, but he refused, Regan said.

The photographer then walked up to Churchill and took the cigar from his mouth and then snapped the photo.

"And this, it's the reaction he got," Regan said, referring to the less-than-thrilled look on Churchill's face.