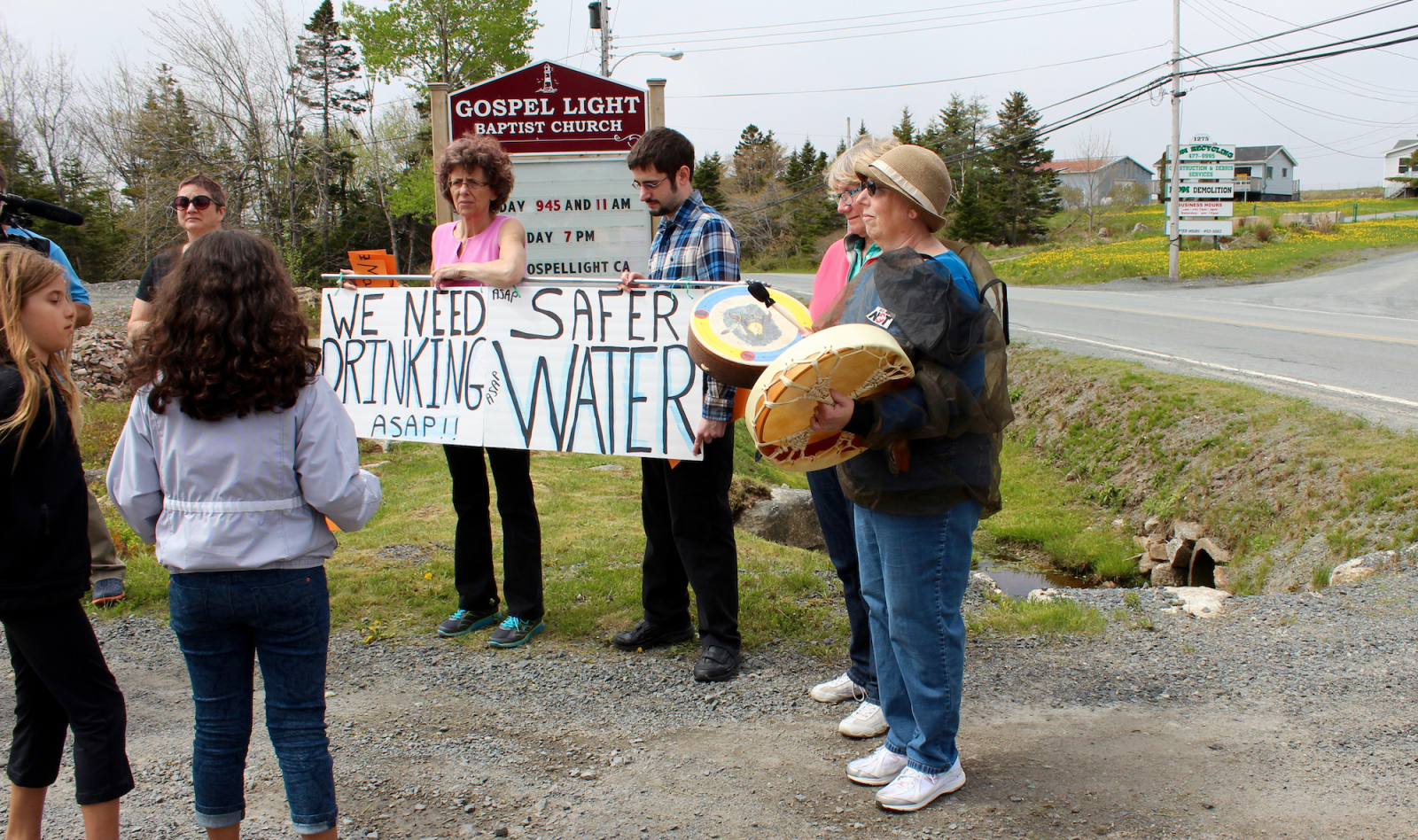 Marlene Brown and other Harrietsfield residents protest for safe drinking water in their community in 2015, across the street from the site of contamination. Photo by Rebecca Hussman.
Previous story
Next story

Prince Edward Island’s new Water Act should serve as a model across Canada, where no federal legal right to a healthy environment exists, says the head of a legal advocacy group.

The law, currently winding its way through P.E.I.’s legislative process, seeks to ensure that the tiny province’s water resources cannot be easily bottled and shipped. It also bans hydraulic fracturing, a process for extracting hydrocarbons commonly known as fracking, an element of the law Lisa Mitchell hailed as worth emulating in all Canadian environmental legislation.

“The law is one of the first provincial statues here in the Atlantic region that even takes any real step towards recognizing there is a ‘right’ to water – the right to clean, accessible, affordable water,” Mitchell, the executive director at East Coast Environmental Law in Halifax, said in an interview with National Observer.

She said lawmakers across the country should look to the purpose and goals section of the P.E.I. Water Act as a model for acknowledging Canadians’ right to a healthy environment.

“We need to see more of that language in environmental laws (in Canada) generally, not just about water but about air, about soil, about this whole concept of a healthy environment,” Mitchell said.

The Water Act will become law once a review of three regulations is completed, according to George Somers, the manager of drinking water and wastewater management for P.E.I.’s Department of Communities, Land and Environment. He estimates that the Act will be operational in late spring of 2019, at the earliest.

In essence, the new law gives the provincial government increased legal authority to control how water is managed on the island, protecting its groundwater supply from being depleted and seeking to prevent potential water-related problems – such as droughts – from arising in the future.

The current draft of the Water Act reflects views voiced in about a dozen public hearings regarding the future management of the Island’s water, Somers said.

The Island relies entirely on groundwater for all water use, as it is surrounded by saltwater. Since agriculture (which requires a large amount of water for irrigation) plays a large role in the 5,660 square kilometre province’s economy and about half of its 150,000 residents rely on private wells, it was in the interest of the government to create a statute that focused exclusively on water, Somers said.

"There was concern about what might happen, about not giving away water and shortchanging the people who depend on it now,” Somers said.

“We need to see more of that language in environmental laws (in Canada) generally, not just about water but about air, about soil, about this whole concept of a healthy environment,” says @ecelaw's Lisa Mitchell.

One of the new regulations still under review by the Water Act committee involves limitations on bulk water removal to ensure that Islanders’ groundwater is not depleted in the future as a result of industrial activity.

Members of the public questioned the amount of water that would be withdrawn for bottling purposes, said Somers, explaining that their concerns were sparked by an outcry in an Ontario town where Nestlé purchased a well which nearby residents wanted for its future drinking water supply.

“In the effort to provide water for industry, we want to make sure we don’t let people suffer,” Somers said.

The new law would prohibit the export of bottled water in any quantity from the province and lower the amount of water that can be collected before a permit is required, so that any withdrawals which exceed “more than typical domestic demand” will require a permit, Somers said.

Another “positive step” in the new law is a ban on fracking in P.E.I., said Mitchell. Fracking, which involves drilling and injecting water at a high pressure into the deep underground and opening up existing cracks in order to extract oil or gas, has been shown to cause complications such as earthquakes.

Mitchell and East Coast Environmental Law have been advocating for the right to a healthy environment for Canadians for several years now, including by putting forward a proposed provincial environmental bill of rights for Nova Scotia that did not make it past first reading.

“The idea of a right to a healthy environment is not new – in fact, the right passed into law in Quebec in 1978, in the Yukon and Northwest Territories in 1991, and Ontario has had an Environmental Bill of Rights since 1993,” Mitchell said.

“Canadians have been thinking and talking about this idea for a long time and lots of people would be surprised to learn that we don’t already have a right to drink clean water or breathe unpolluted air."

The act's most notable goals include:

- “access for everyone to a sufficient quantity and safe quality of reasonably affordable and accessible water for personal and domestic uses, and to basic sanitation that is safe and hygienic, (which) is essential for an adequate standard of living.”

- that “present and future generations shall have sufficient, safe, acceptable, physically accessible and affordable water for domestic purposes.”

- “that the public be involved in and kept informed about the state of the water resources," including by access to government reports and public consultation.

Meanwhile, a grassroots movement campaigning for legal environmental rights in Canada has been growing in recent years. The Blue Dot movement, which launched in 2014, is “based on the idea that everyone in Canada deserves the right to a healthy environment, including clean air and water, and a say in decisions that affect our health and well-being,” says the group's website. The ultimate goal of the Blue Dot movement is to add the legal right to a healthy environment into the Charter of Rights and Freedoms.

Since Blue Dot’s inception, 172 municipalities — representing half of the country’s population — pledged their support for environmental rights and more than 30 members of Parliament from across political lines declared their support for the legal right to a healthy environment. The Blue Dot also reports that in 2018 the New Democratic Party and Liberal Party of Canada both adopted resolutions supporting a federal environmental bill of rights.

According to Mitchell, environmental rights are important because citizens’ concerns regarding how pollution negatively impacts their environment and health could no longer be ignored so easily.

Take, for instance, the Aamjiwnaang First Nations reservation in Ontario's Sarnia -- an area known as "chemical valley" and “cancer alley.” The air in this region has been severely polluted by emissions from the phalanx of oil refineries and chemical plants in the area, some of which are located directly next to the reservation. However, emissions have shows no signs of slowing down.

Currently, the Aamjiwnaang nation and other people of Sarnia have no recourse to fix a situation not of their making, and must watch people around them fall ill while those responsible continue to operate without consequences, according to reporting from the Price of Oil joint investigation by National Observer, Toronto Star, and Global News.

The effects of an absence of legal environmental rights can also be seen in the community of Harrietsfield, a small village near Halifax, Nova Scotia, whose water supply has become severely contaminated, largely due to improper storage and disposal practices at a toxic waste site in the middle of their community.

The company that operated the site, RDM Recycling, was taken to court by Nova Scotia’s environment minister in 2010 for violating the Environment Act, and told it must remediate the site and pay for the damage caused. The company never fully complied with the court's orders. The estimated cost of the site clean-up is more than $10 million.

In the end, it was the provincial government that succumbed to public pressure and provided a small number of homeowners with water treatment systems. To this day, people living in the Harrietsfield region are still stuck in unsellable houses, down thousands of dollars, and forced to fill up jugs of safe drinking water at a church in a neighbouring town. Many still claim that their well water, as well as the water at the Harrietsfield Elementary School, is unsafe to drink and poses a danger to their health.

The legal right to a healthy environment would help people who have experienced environmental injustices have legal standing in court, forcing government and judges to take their concerns seriously, Mitchell said.

“The community of Harrietsfield is a community we feel has suffered because we don’t have a right to a healthy environment (in Canada), because they don’t have that right," Mitchell says.

Crucially, if environmental rights are added to the Charter, there would be a much stronger disincentive than there is currently to engage in any activities that would be harmful to the environment and people's health, she said.

“Access to clean water, unpolluted air and uncontaminated land should be a fundamental right for all people, and yet it is not,” she said.

It is no surprise that PEI

It is no surprise that PEI would wake up so quickly and decisively to the issue of the "Right" to a healthy environment. Anyone living on an island - sooner or later realizes how fragile is their existence in this limited sphere. Ask the British - who have suddenly come face to face with the fact that they are, indeed, an island and their options are limited when there is no Empire to supply their wants, no EU to cushion their inadequacies.

Even those of us living within the natural bounty that is the continent of the Americas, are painfully, slowly, recognizing that the things we take for granted, potable water, breathable air - are rapidly being depleted, contanminated, destroyed by the greed of the capitalist sytem which is based, not on productivity, as we like to claim, but on brute exploitation and extraction. Land is wealth, or has been, until it no longer is - because someone with great power, much money, has destroyed it, ruined it for periods of time that rival geologic eras.
Open pit mines, visible from space, leave gaping wounds in the earth's productive surface. Razed and burning forests, visible from space, delivering deserts, stripped top soil and catastrophic erosion add further scars, recent appalling aerial photographs of the wholesale contamination of rivers and deltas, vividly illustrate the obliteration of life within their dead zones.

Can humanity, or anything else, survive this global epidemic of human carelessness?