Hissing, shouts of 'shame' as pipeline station gets permit 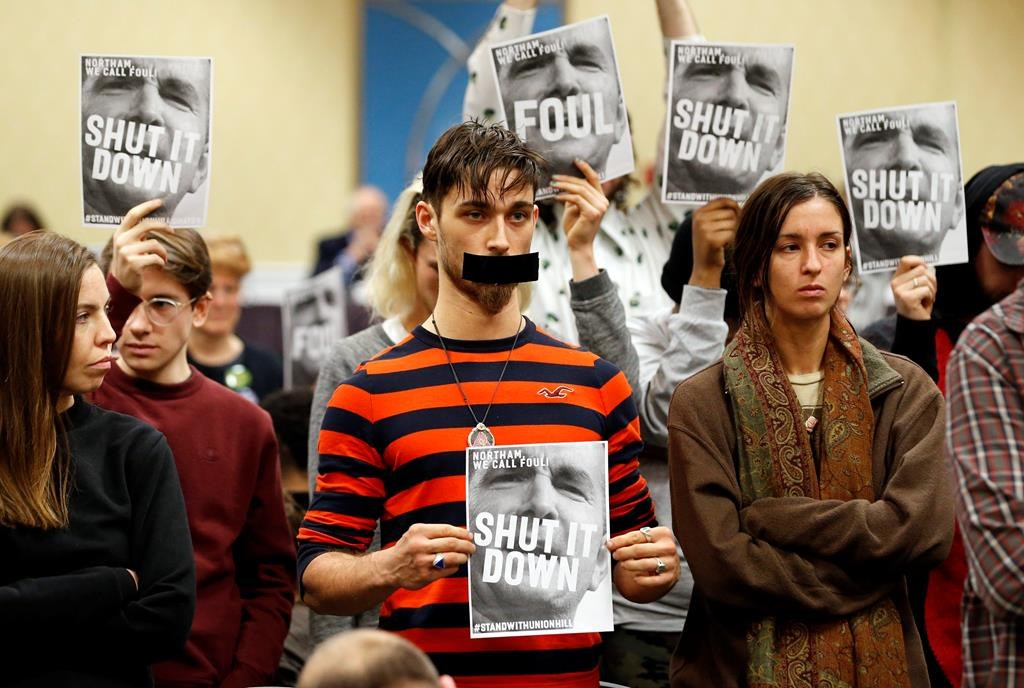 Protesters hold signs as they turn their backs on a meeting of the Virginia State Air Quality Control Board in Richmond, Va., on Tuesday, Jan. 8, 2019. Photo by The Associated Press/Steve Helber
Previous story
Next story

A state board in Virginia approved a contentious plan Tuesday to build a natural gas pipeline station in a historic African-American community, prompting angry shouts of "shame" from more than 200 opponents.

The State Air Pollution Control Board voted 4-0 in favour of a key permit for the Atlantic Coast Pipeline, which would run 600 miles (965 kilometres) and carry fracked natural gas from West Virginia into Virginia and North Carolina.

Some opponents of the project hissed, coughed and shouted during the meeting. Fifteen people were removed by state police, and one woman was charged with trespassing after she laid down on the floor and refused to comply with police verbal commands to leave.

The proposed site for the compressor station is in Union Hill, an unincorporated community founded by freed slaves. The community is in rural Buckingham County, about an hour's drive west of Richmond.

Opponents are concerned that exhaust from the 54,000-horsepower compressor station would hurt low-income and elderly residents living nearby. Supporters say it will boost development.

The station would be built on 15 acres (6 hectares) of a 70-acre (28-hectare) site, and the rest of the property left undisturbed, according to Dominion Energy, the pipeline's lead developer. Compressor stations are used to power interstate natural gas pipelines, moving gas through the system.

Paul Wilson, pastor of two Baptist churches near the proposed site, said opponents will keep fighting. He didn't elaborate on whether they would take legal action.

"We're looking at all of our avenues," he said after the vote. "It's a long way from over. I think Dominion wants to wear people down. But that's not going to happen."

Dominion spokesman Karl Neddenien acknowledged in a statement after the vote that it will "have to continue building trust in the community." He said the project's backers are making investments in a new community centre and rescue squad "but it will not end there."

Neddenien said most air emissions at the station will be 50 to 80 per cent lower than at any other compressor station in Virginia.

The air pollution permit has become a flashpoint in the yearslong fight over the pipeline.

Supporters say it's needed to help boost the supply of natural gas. Opponents say it is an unnecessary fossil fuel infrastructure project that tramples on land rights and hurts the environment.

With a current pricetag of $6.5 billion to $7.0 billion, the pipeline has recently suffered significant legal setbacks, including a 4th U.S. Circuit Court of Appeals ruling last month throwing out a permit for the pipeline to cross two national forests, including parts of the Appalachian Trail. Dominion has suspended all project construction and said it plans to appeal the ruling.

John Laury, who lives less than a mile (kilometre) from where the compressor station would be built, said he doesn't believe assurances from Dominion or state regulators that emissions from the station would not hurt residents' health or the environment.

"I challenge them to come live in the community with us, to breathe this air, drink this water," said Laury, 74.

He said the station will "set a new national standard that all future compressor stations will have to meet across the country."

Gov. Ralph Northam angered environmentalists and minority groups when he replaced two members of the pollution control board after it delayed a scheduled vote in November.

Northam, a Democrat, said the move was unrelated to the compressor station vote and that members were replaced because their terms had expired.

Two new members didn't vote Tuesday, nor did a third member who cited a conflict of interest.

Board member William Ferguson said at the hearing that there's a real need for the pipeline, particularly in Virginia's Hampton Roads region.

His comments prompted a woman to shout: "How much is Dominion paying you?"

Some opponents held pieces of paper with a blown-up photo of the governor's face and the words "foul" or "shut it down."

Northam has said he's agnostic on how the board votes.

"As far as the pipeline ... there's not a lot of middle road on that issue," Northam said in a recent radio interview. "I've tried to be as fair as I can."

After the board approved the permit, some of the opponents overturned their chairs.

Charles Strickler, a retired dentist, predicted that opponents will not give up their fight.

"I think there are going to be people in front of bulldozers for the pipeline getting arrested," he said.

Quite apart from the fraught

Quite apart from the fraught issue of continuing to expand the use of fossil fuels, and the support of the highly questionable practice of "fracking" there is a broader, deeper and nasty underlying issue.

Why is it that every industrial or undesirable development, institution or activity winds up being built in the middle of, or routed through, the areas inhabited by marginalised people? Black communities, Indian/Indigenous reserves? The record of such "planning" decisions is invidious at best, and actively malicious at worst. Moreover it is a worldwide phenomenon and has contributed mightily to the ecological malfeasance of all kinds of industries, and benefited the bottom lines of the psychopathic corporate elite.

If the new compressor station

If the new compressor station is going to be so much more efficient and safe - why not prove it by retrofitting some existing stations and publishing the before and after results? Otherwise, how can the opponents hope to trust the promise, which like so many others will most likely be broken?